There are events that define a nation. Through my history books I read as a student, I learned about the start of the Civil War, the attack on Pearl Harbor, the assassination of Dr. Martin Luther King Jr. and other tragedies that changed the trajectory of our country. The 9/11 attacks in New York City, Washington D.C. and Shanksville, Pennsylvania are recorded in history books destined to be read by students generations from now as a tragedy that redefined our nation’s course…

But in every tragedy, there is an opportunity for triumph…I truly believe that…In 2006, I visited Ground Zero, where I was able see with my very own eyes physical remnants of the tragedy that shook the very foundation of New York City in particular and our country in general. I was both saddened by what I saw and yet encouraged by the vigilant rebuilding taking shape… 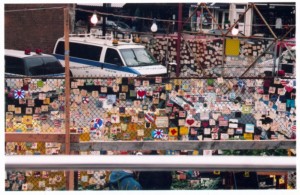 A makeshift memorial for the victims of 9/11 at Ground Zero. I took this photo in December 2006.

I was also encouraged that a church located directly across the street from the World Trade Center complex in New York City was still standing, but most importantly, the church had been instrumental in ministering to the victims of 9/11 that horiffic morning. That church is St Paul’s Church. 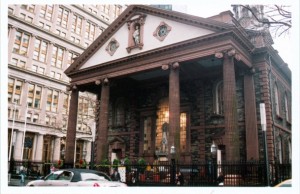 This is the photo that I took of St. Paul's Church in December 2006.

Read an excerpt from an account of an associate of ministry of St. Paul’s Church about their service to the victims that morning. (To read the entire account, go to National Geographic.com.)

On September 12, after having escaped the maelstrom of 9/11, I returned to Lower Manhattan to survey the damage to St. Paul’s Chapel—just yards away from where building 5 of the World Trade Center stood—and to find ways to be helpful in the rescue effort. At that point we assumed there would be many survivors.

As I walked down Broadway from my apartment in Greenwich Village, my heart was pounding, not knowing what I might find. I assumed the chapel had been demolished. When I saw the spire still standing, I was overwhelmed. It took my breath away.

Opening the door to enter St. Paul’s was an extraordinary experience; except for a layer of ash and soot, the building survived unscathed. Many proclaimed that “St. Paul’s had been spared.” It seemed clear to me that if this was true, it was not because we were holier than anyone who died across the street; it was because we now had a big job to do.

Taking this challenge to heart, we set up a cold drink concession and hot food service four days later for the rescue workers, and men from our shelter, and many others, proudly flipped burgers at what came to be called the “Barbecue on Broadway.” The relief ministry at St. Paul’s was supported by the labor of three local institutions—the Seamen’s Church Institute, the General Theological Seminary, and St. Paul’s, in the parish of Trinity Church—and volunteers from all over the country.

More than 5,000 people used their special gifts to transform St. Paul’s into a place of rest and refuge. Musicians, clergy, podiatrists, lawyers, soccer moms, and folks of every imaginable type poured coffee, swept floors, took out the trash, and served more than half a million meals.

Emerging at St. Paul’s was a dynamic I think of as a reciprocity of gratitude.a circle of thanksgiving—in which volunteers and rescue and recovery workers tried to outdo each other with acts of kindness and love, leaving both giver and receiver changed. This circle of gratitude was infectious, and I hope it continues to spread. In fact, I hope it turns into an epidemic.

As we reflect on the tragedy that knocked the collective wind out of our country for a time, let us also rejoice in the triumph that has emerged from our despair: the determination that we still be human in spite of the inhumane acts committed upon us, that we are still a refuge for “your tired, your poor, your huddled masses yearning to breathe free,”  and that we are still “one nation under God.”

I’m in an Empire State of Mind this morning…