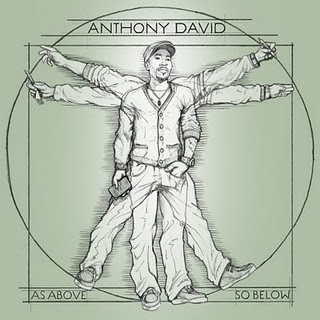 It’s gettin’ hot out there, huh? I guess spring was last week, and now it is straight summer…well not really, but it sure feels like it…

Atlanta soul singer Anthony David is tryin’ to get it hot out there with his new song “God Said.” You like that segue, huh? I don’t know much about his music honestly, but when I saw an article posted about his latest song on Facebook, I was compelled to read it. David is an atheist or secular humanist according to the article in Creative Loafing. And his song “God Said” from his album “As Above, So Below” demonstrates his beef with us religious folk. For the record, I have some beef with some religious folk too, but I wander if dude threw the baby out with the bath water. Nothing on this earth is perfect and that includes Christianity. And anything that involves flawed human beings is sure to have some issues.

“What’s really interesting on this album is that I learned a lot of things over the past three years that I’ve been mulling over for a while,” says David, who turns 40 this year. “The biggest change is I became what I call a secular humanist, or an atheist. All I know is that I’m interested in being nice to people but I’ve never believed in any religion. But it’s tricky when you’re in the South and you’re around the culture that I’m in.”

“I like the idea of marriage but I don’t think it works,” he confesses. “I think we need to rework it, I just have no idea about how. That bugs me and I couldn’t really be in a relationship with those kinds of thoughts with no resolve, and that’s part of what happened. Even with ‘4evermore,’ there was a lot of rationalization going on if you listen to my verse.”

And from another Creative Loafing article, below is what David said directly about the new video.

I’m sure there will be some disagreements. I put some of my more radical ideas in there, and there will probably be some disagreement about a few things here and there. That’s ok with me, I’m all for civil discussion and people having their own ideas. I don’t mean any harm, but they’re my ideas (and the directors- we all pitched in). There will be places to have these discussions, but mostly, I tried to stick to the unifying point, which is anti extremism and fundamentalism. I mean well by it. I encourage THOUGHT, REASON, LOVE, and RESPECT. I hope that comes across at the very least.

So check out the video for yourself…