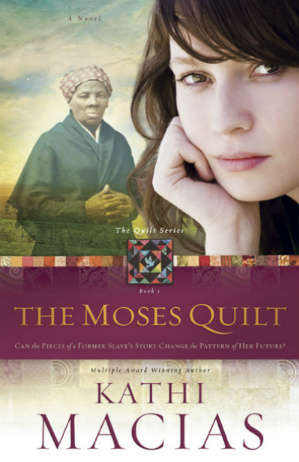 I had been holding off all month about posting about Black History Month because I knew I would be writing about Kathi Macias’ latest book “The Moses Quilt.” In this book, we meet young couple Mazie Hartford and Edward Clayton, who live in Langsdale, California nearby San Francisco. The couple are clearly in love, and Edward wants to marry Mazie, but for some reason, Mazie won’t say yes to his proposal. Edward is a Christian, a successful lawyer and devoted to Mazie. Mazie is also a Christian, getting ready to start her teaching career and equally devoted to Edward. Everyone in their families believes they are a good match even if the two are different races. Edward is black while Mazie is white. Although Mazie is not racist, it becomes clear as the story continues that their different races is causing Mazie to be fearful about being an interracial married couple.

Mazie’s great-grandmother Mimi, who moved from Alabama to live with Mazie and her mother, understands Mazie’s apprehension about moving forward with Edward. Although she is an elderly white woman from the South, she is not racist. In fact, she believes that she can help Mazie move past her fear by telling the story behind her beloved Moses quilt. The Moses quilt was named after Harriet Tubman, an escaped slave who became like Moses in the Bible as she led hundreds of escaped slaves to freedom through the Underground Railroad.

Throughout the rest of the book, Mimi shares stories about Harriet Tubman with Mazie and Edward. As I learned about Harriet Tubman as a child, I did not expect to learn more about this courageous woman but Macias obviously thoroughly researched Tubman’s life and shared details I did not know. Mimi’s storytelling becomes even more precious to Mazie and Edward as it becomes clear that the 93-year-old woman is nearing death. Does Mazie marry Edward? Will Mimi get to finish her story before she passes away? What secrets are interwoven in the Moses quilt? Of course, I cannot answer those questions! You have to get the book! What I appreciated most about Book 1 in “The Quilt Series” is how Macias was able to stitch together a modern day love story and a story about one of the most beloved women in black history.

For more information about “The Moses Quilt,” please check out the book trailer below:

For more information about Kathi Macias and her other books, please go to kathimacias.com.

” please see the link below. By entering the contest, you are also subscribing to my e-mail list

For more opportunities for free copies of “The Moses Quilt” by Kathi Macias, please visit Facebook.com/CSSVBT.KathiMacias.

Note: I was given a complimentary copy of this book from the author in exchange for posting a book review on my blog; however, the opinions are mine alone.

(Please click on the Rafflecopter widget to enter the competition, but add your comment below in the comments section. Thank you

7 thoughts on “Book Notes: My Review of “The Moses Quilt” by Kathi Macias (BOOK GIVEAWAY)”