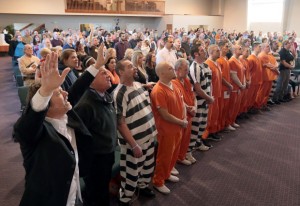 Thank you God for Jesus because now we have been given a second chance to get right with God! When I think of the devilment I have been involved with from time to time, I thank God that He sees fit to forgive me over and over and over again…That’s why I was so encouraged to read an article about inmates who formed a choir and perform at local churches in Missouri…Below is an excerpt of the article written by Susan Weich from the St. Louis Post-Dispatch….

Wearing leg irons and uniforms in orange or black-and-white stripes, the 12 men belting out “How Great Thou Art” Sunday at Calvary Chapel Church were anything but your traditional choral group.

The performance was a little shaky, with a few missed notes and some forgotten lyrics, but the congregants didn’t seem to mind. They gave the men a standing ovation.

“In their hearts, they’re the (Mormon) Tabernacle Choir,” said Capt. David Curtis, commander of the Lincoln County Jail, who hatched the idea for the Second Chance Choir.

And below is a video of one of their performances….

Aren’t you thankful for a second chance?

One thought on “Inmates Form a Second Chance Choir! (VIDEO)”