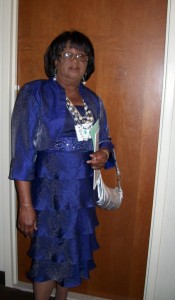 You know what it is…It’s that special day each year that is set aside to honor the women who not only gave birth us but give their lives for us if we’re lucky and blessed…I am…and so today, I must honor Alice May, my mama!

I’ve been thinking for the last few weeks what should be the focus of today’s post…Yesterday, I went to Southwest Regional Library on Cascade Road to see Atlanta’s Georgia Peach Authors which includes Dwan Abrams, Kendra Norman-Bellamy, Jean Holloway, Gail McFarland, Marisa Monteilh and Electa Rome Parks. It was the first stop on their 2011 tour. Anyway, McFarland, a romance novelist, talked about her blog named Mamaknology which is dedicated to the wise sayings that her mama told her. One of her wise sayings was, “Don’t show the best of what you have to the worst of the world.” Translation: Don’t wear a skirt so short that any and everybody can see your stuff…Wise stuff fo sho…I thought about writing a post about my own my mamaknology, but my mama doesn’t really deliver one-liners like that so I decided not to attempt to bite McFarland’s wonderful idea…

But as is the case for much of my life (and since this is a primarily a religious blog), I found inspiration within the pages of  The Holy Bible…You have probably heard of the Proverbs 31 woman, the bout it bout it wife and mother who is so accomplished from her business to her home life that she must be a myth…Well, I know it’s true because it describes my mother…So indulge me as I rewrite its words, Proverbs 31: 10-31,  to describe my mother…

10 A wife of noble character who can find?
Look no further than Alice May Holness. She is worth far more than the fattest platinum diamond ring.
11 Her husband, Dr. Denzil D. Holness, has full confidence in her
and has anything that a husband could ever want…
12 She brings out the best in him and supports him
all the days of her life.
13 She is an old school mama that knows how to sew and works with eager hands to make her home a sanctuary.
14 She is like the semi-trailer trucks that crisscross the nation,
bringing her food from afar from from the DeKalb Farmers Market to her network of Jamaican friends.
15 She goes to bed late and gets up early;
she provides home-cooked food for her family almost nearly every day
and has enough left over to give to her friends.
16 She has been selling Avon for decades;
out of her side hustle she provides extra money for her household.
17 She relishes working hard even though she is retired now,
her arms are strong for her tasks.
18 She knows that she is working for her family and the Lord,
and she stays up working later than anyone in her house.
19 She can sew an outfit as easily
and as she knits together her family.
20 She is always ready to give away something to somebody
and the trunk of her car is where she stores much of her impromptu inventory .
21 When it snows in Atlanta (which is rare) or the weather is just bad, she has no fear for her household; because her shelves are well stocked and she even has a kerosene lamp
22 She has clean bed linens always ready to be used;
she is clothed in her best on Sundays.
23 Dr. Holness is respected among men at church,
where he takes his seat among the deacons and other leaders at the church.
24 She volunteers in Jamaica every summer teaching children at a Vacation Bible School,
and supplies all the children with arts and crafts, clothing and other items she lovingly collects and brings from the United States.
25 She is clothed with strength and dignity;
she can laugh at the days to come.
26 She tells it like it is so if you don’t want to hear the truth, don’t step to her.
27 She manages her household
and even takes care of her grandchildren nearly every weekend.
28 My brothers and I arise and call my mother blessed;
Dr. Holness, my father, does too, and he praises her:
29 “Many women have it going on,
but you surpass them all Mama.”
30 Charm is deceptive, and beauty is fleeting;
but a woman who fears the LORD is to be praised.
31 Give it up for Alice May because today is her day…

P.P.S. I wrote another post about my mother two years which ago which features some really cool pics from back in the day…

13 thoughts on “Alice May, It’s Your Day (Happy Mother’s Day to All Mothers)”