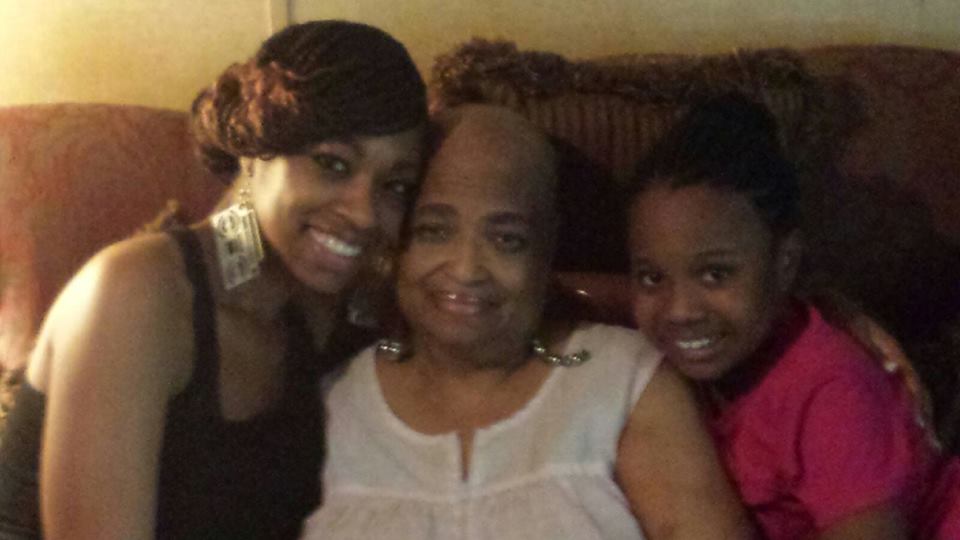 I could not let the month of October go by without acknowledging that this month is Breast Cancer Awareness Month. I lost two of my Delta line sisters to this hideous disease so this is a cause that is very dear to me. When another one of my sorors Keisha Pooler shared on Facebook that she had been diagnosed with breast cancer and began posting pictures of herself at her chemotherapy treatments, I was inspired by her openness and bravery so I thought I would tell her story here. I hope her openness and bravery inspires you as they did me. 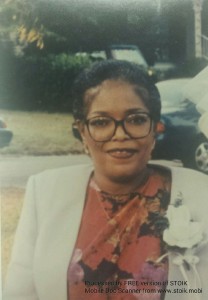 As an invincible and healthy college freshman at Morris Brown College in 1992 with nothing but time ahead of her, the last thing on on Keisha Pullins’ mind was breast cancer. But an arbitrary search for a pen in the lingerie drawer of her Aunt Jackie Pullins, who the Dublin, Georgia native lived with while enrolled in the Atlanta school, put her in the path of the deadly disease in a way that forever changed her trajectory. “I was digging in her drawer, trying to find a pen, and I ran across her prosthetic. It was shaped in foam and had a nipple on it.  I asked her, ‘Jackie, What is this?’ She said, ‘It’s a fake titty. What do you think it is?'” Her aunt’s clear-eyed, straightforward answer was representative of the sister relationship that Keisha had with her mother’s baby sister, who was in early 40s, who Keisha saw as mostly a sister but a sometime surrogate mother. Her Aunt Jackie also told her niece to not tell anyone as she did not want anyone to worry about her. However, Keisha was worried. “Her diagnosis changed my life. It was representative of something that could transfer into death in my home, in my family.” From then on, at the recommendation of her Aunt Jackie, who found the lump in her breast, Keisha began doing self-exams and has ever since. While Keisha kept her Aunt Jackie’s secret, her secret revealed itself when her aunt came home to Dublin several months later by the end of Keisha’s freshman year to go the the funeral of Keisha’s stepfather. “At the funeral, she became very ill so she started chemotherapy in Dublin. She never made it back to Atlanta.”

While Keisha continued at Morris Brown College, she returned to Dublin periodically to check on her Aunt Jackie and go with her to her chemotherapy treatments when she could. “She was not married, and she had no children so my sister and I were her kids.” After her treatment, her aunt went into remission for roughly four to five years but the cancer came back in 1997 or 1998. She was told she had months to live, but she didn’t want to go through chemotherapy again. Despite her prognosis, she didn’t pass away until 2001. During that time, however, she continued to live and deliver her deadpan humor. When Keisha asked her Aunt Jackie why she was adamant on getting a loan at one point, her Aunt Jackie replied, “Keisha, I’ll be dead before they get the money back.” “I remember thinking that in that moment, she was laughing and dying simultaneously.” However, there were serious moments too. Her aunt made her the beneficiary of her life insurance policies and showed her where to find all of her important documents. Although Keisha’s mother was her Aunt Jackie’s official caretaker, she felt like the then 25-year-old Keisha would be more responsible. “My Aunt Jackie was adamant about my mom getting a mammogram, but she never did. She always said she was scared to find out.” 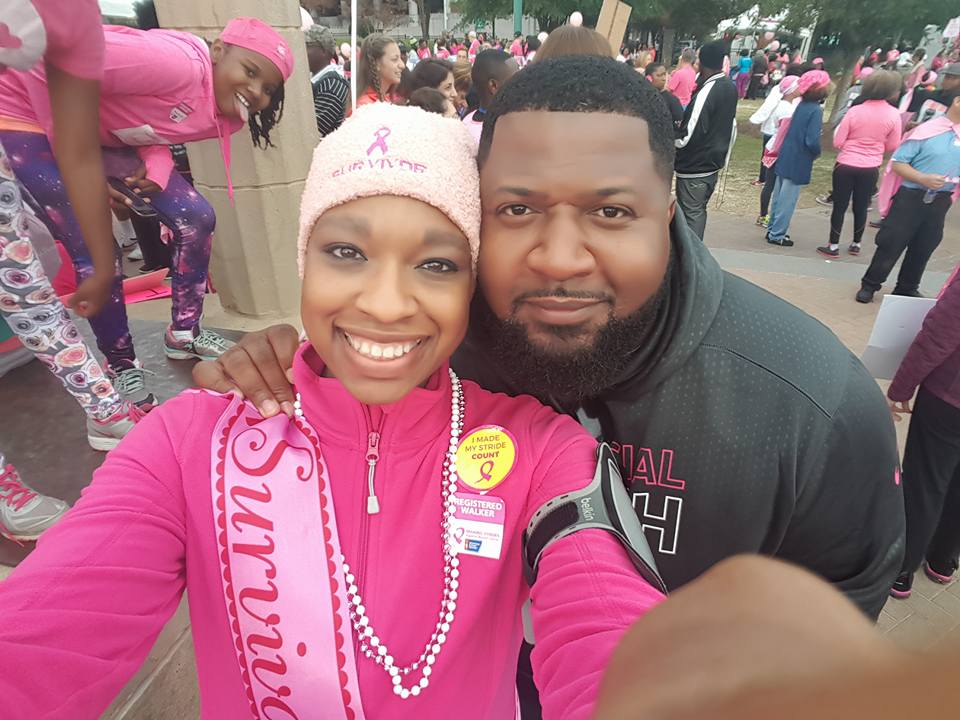 Keisha and her husband at the Making Strides Against Breast Cancer walk on Saturday, October 24. Their daughter is in the background.

In fact, Keisha’s mother, Mary Marshall, would not have a mammogram until she was 68 years old, in May 2013. It was recommended that she get a mammogram as part of a all full-body exam after she got sick with shingles. Keisha was concerned when her mother called her after her mammogram and told her that a biopsy was the next step. She called the medical center and asked about her mother’s results. “I said, ‘I know you’re limited in what information you can give, but do I need to make a trip to Dublin to see my mother?”’ She was told that she should come to Dublin so Keisha and her sister made the trip. The same doctor, Dr. Samson, who took care of her Aunt Jackie during her breast cancer treatment was the same doctor that told Keisha’s mother Mary Marshall in front of her daughters that she too had breast cancer. “My sister had to leave the room. I took out my pen and started taking notes and asking questions. My mom took a deep breath and said, ‘Okay, what do we do next?’ There were no tears. She was stoic.” She was diagnosed with stage 1 breast cancer in June 2013, and six months of chemotherapy followed by four to six months of radiation was recommended for treatment. Mary Marshall says she cannot pinpoint exactly why she waited so long to have her first mammogram except to say that she saw what her sister went through and did not want that for herself. “I just put it out of my mind.” However, her sister’s example came back to her when she was diagnosed with breast cancer. “In my mind, I said, ‘I’m going to be strong like Jackie. ‘”

In fact, her sister’s strength inspired Mary Marshall so much that she urged her daughter to have a follow up exam after Keisha’s first mammogram at 40 years old revealed that she had some cysts that needed to be further evaluated. Keisha delayed making and keeping the appointment for roughly eight to nine months. While she spent spring break with her daughter in Atlanta earlier this year, she told her that she would not leave until Keisha made the appointment. “I had that feeling that she might follow in my footsteps so I said, ‘Keisha, have you gone?'” So Keisha made and kept her follow up 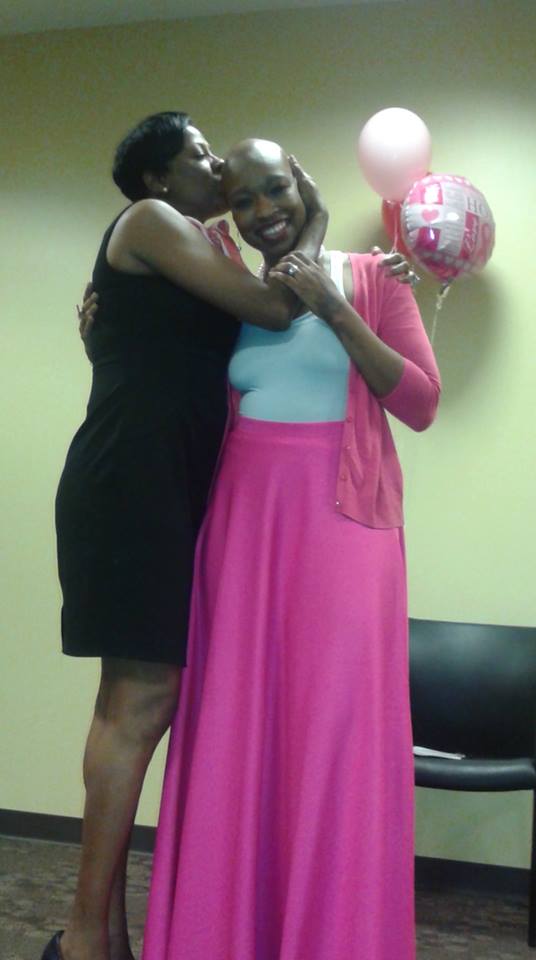 “The beautiful thing about breast cancer is that it puts you in a sorority you never asked to be in.”

appointment. An ultrasound was done, and a more in-depth evaluation was recommended. She was told she get the results in a week. “I went about my life, but I felt like I was in a cloud like when you see a character in a Spike Lee film and their feet aren’t moving. It felt like I was floating,” says Keisha, who is an instructional coach at Maynard Jackson High School in Atlanta. When she got the call, she was at the school. The news wasn’t what she hoped for. “I stopped breathing for a second. I went outside and sat on one of the benches and took my legs up under me. I asked the doctor, ‘Am I going to die?’ He said, ‘I’m not telling you that is going to happen. Let’s take one thing at a time.” Keisha was reassured when her doctor told her he would be meeting with a team of medical professionals to immediately work on a treatment plan for her stage 1 breast cancer. She was also encouraged when he told her that not all breast cancers are the same as Keisha has borderline triple-negative breast cancer. She had a lumpectomy in June and started chemotherapy in July. Now, she is undergoing radiation. She did not hesitate to share her story on Facebook with her community of friends and has shared photographs throughout her treatment. “I’ve been given the gift of speaking and writing. I think I got it from my mother’s father who was a preacher. He was so influential in the community, and he was always being vocal. It something sits inside of me, it sickens me. And I feel like I am soldier on the front lines, and if I kept it to myself, I’m not only doing an injustice to myself but to Jehovah Jireh.”

After she was told about her diagnosis, she told the news to Marcus, her husband of 16 years. “He said, ‘We’re gonna kick cancer’s @$$! You’ve seen your mama. You’ve seen your aunt.'” The couple then told their 10-year-old daughter. Although her eyes were filled with tears, she said, “‘Okay, mama we got this!'” She gave me a high five, and she gave her daddy a high five.” Providentially it seems, after Keisha’s diagnosis, her husband broke his hand in a car accident and as result, he has had to recover at home with Keisha.  “I feel like I am a seed that was planted, but I was not meant to be buried, I am planted to bloom.”