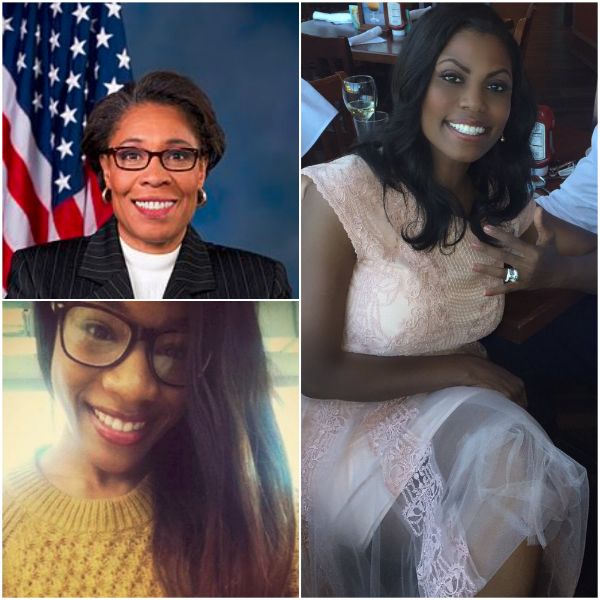 1.”I’m A Christian Feminist, Because Jesus Loves Women, and We Should, Too” by Char Adams

Excerpt: As I navigate the world as a modern-day woman, I can’t help but notice the many sexist practices we have wrongly attributed to God’s word. For example, I was on a date a few months ago and, as usual, I insisted on paying for my own meal. This infuriated my date, a Christian man, and he proceeded to tell me how it was his “job” as “the man” to “provide” for me during our date. I asked him if he could show me a scripture in the Bible that said “Men, pay for your date’s meal because you’re the man and it’s your job to provide.” Of course, he could not. (Actually, the Bible says in Proverbs 31 that a “virtuous woman” “provides food for her family,” but I’ll sip my tea.) See more at: bustle.com.

2.”20 Lessons I’ve Learned Since Leaving The Church” by Makiah Green

Excerpt: I haven’t been to church in over a year now, and I’ve been pondering how I should address what I’ve discovered along the way. If you’ve been following my blog for a while, you probably could’ve never guessed that I would end up here. I never imagined that I could exist outside the Church I once held so dear. But due to the routine state-sanctioned violence that is being inflicted on my people, and the inadequate response from the church (among other things), I have decided to remove myself entirely from a system that claims to value my soul, but fails to show up for my Black body. I’ll probably end up writing a book about this one day, but in the meantime, here are 20 things I’ve learned since leaving the church. See more at: makiahisms.com.

Excerpt:  The rescue began with Donna Brazille being appointed interim Chair of the Democratic National Committee and Rep. Marcia L. Fudge being appointed Convention Chairperson. Next Baltimore Mayor Stephanie Rawlings-Blake was chosen to gavel to order the convention in the stead of the disgraced former chairwoman and an invocation was delivered by Rev. Dr. Cynthia Hale of Ray of Hope Christian Church.  We heard the black women in the choir of the Mother Bethel AME Church sing “Glory, Glory Hallelujah” and we saw Rev. Leah Daughtry, Mayor Shirley Franklin, Lorraine Miller – Chair of the Credentials Committee, Rep. Maxine Waters, State Rep. Stacey Abrams and finally the house was shut down by First Lady Michelle Obama. See more at: atlanta.cbslocal.com.

4.Omarosa I’m Engaged Check Out This Rock by TMZ Staff

Excerpt: Omarosa (director of African-American outreach for Donald Trump…smh…) gained some weight over the weekend … with a fat rock. She’s engaged! Pastor John Allen Newman proposed to Omarosa Sunday in front of his congregation at The Sanctuary @ Calvary Church in Jacksonville, FLA … a churchgoer who witnessed the proposal tells TMZ. See more at: tmz.com.

Incidentally, have you heard of this event happening later today? I cannot even… 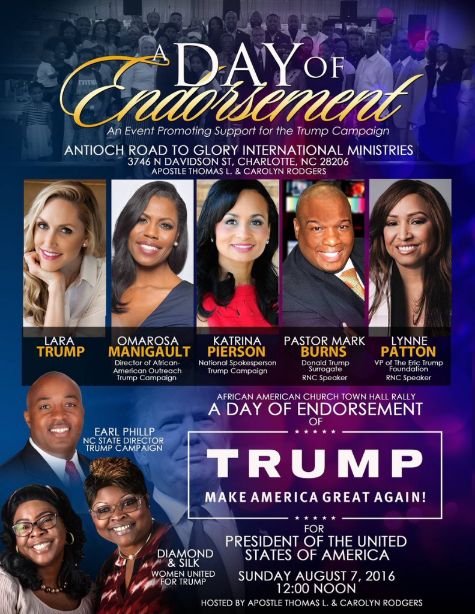 5.”Tweet is Working on a Gospel Album” by Aliya Faust

“As a consumer and an artist, I found that I was falling out of music, so I went back to the basics,” she said once during a press conference. “[Listeners] will find out what inspired me to do music in the beginning. My gospel roots. You’ll hear all that on Charlene.” We caught up with the R&B songstress at the 2016 Essence Festival in New Orleans after her show in the “Hot Right Now” performance lounge, where she revealed that she’s actually currently working on a gospel album. See more at: gospelgoodies.com. (So on the last episode of “The Preachers,” Pastor Jamal Bryant said he calls Tweet, his “last lady!” In other words, they go together…LOL…)

Excerpt: The Senate has confirmed Carla Hayden to be the next Librarian of Congress. She was approved by a vote of 74-18. Hayden, the CEO of Baltimore’s Enoch Pratt Free Library, was nominated by President Barack Obama five months ago. She becomes the first woman and first African-American to fill the post. See more at : politico.com. (As a child, I wanted to be a librarian so I’m thrilled at this news! My inner child is dizzy with joy!)

Excerpt: Four African-American women were recently elected as bishops at quadrennial meetings of the United Methodist Church, further removing the glass ceiling for Black women in the denomination. In a historic election, the Rev. Sharma Lewis was elected bishop by the Southeastern Jurisdiction on July 13, becoming the first African-American women to be elected as prelate in that jurisdiction. “I was called by God and I made myself available, not just to a position, but to follow God’s will,” said the lifelong Methodist in a statement. “I am excited, and I am really humbled. At 52 years old, I am excited that my next phase of life will be as an episcopal leader. I am humbled to the fact that this is historic.” A native of Statesboro, Ga., Lewis is a woman of several “firsts.” She was the first female senior pastor and first African-American pastor of Powers Ferry United Methodist Church. She was the first woman to serve as senior minister of Wesley Chapel UMC, and the first woman to serve as district superintendent in the Atlanta-Decatur-Oxford District, her current position. See more at: afro.com.

Excerpt: But on Thursday, when she woke to news that a black man, Philando Castile, had been fatally shot the night before by Minnesota police during a motor-vehicle stop, following the death of another black man, Alton Sterling, in a police shooting in Louisiana on July 5, she knew she had to act. “I texted my high school friend Jerry Carter, and said, ‘We have to do something.’ ” says Kimbrough. “I wanted to do it when things were still fired up.” Carter, whose father, Jerry Carter Jr., is the pastor of Calvary Baptist Church in Morristown texted back, ‘We do’ “, she says. See more at: dailyrecord.com.

Excerpt: Gaye Arbuckle lived through an extraordinary moment Tuesday afternoon. She sang a solo, a gospel song, which for her is nothing unusual. But on this day, there was nothing even remotely usual, or normal, or commonplace about whom she sang for. The crowd included President Barack Obama and first lady Michelle Obama; Vice President Joe Biden and his wife, Dr. Jill Biden; and former President George W. Bush and his wife, former first lady Laura Bush. It also included a capacity crowd of more than 2,000 people at the Meyerson Symphony Center, many of them law enforcement officers still feeling a deep, raw grief over the loss of five from their ranks, men who were gunned down Thursday night during a protest in downtown Dallas. See more at: dallasnews.com.

10. “Black Man In A Dress Robbed A Staten Island Bank” by D.L. Chandler

Excerpt:  A Staten Island bank was robbed this past Monday by a black man completely decked out in Grandma’s best Sunday morning at church outfit, which probably isn’t the most effective disguise in the world. For all of the man’s troubles, he only managed to steal a few hundred dollars while being caught on surveillance video. See more at: hiphopwired.com. (This is so hilarious to me!)