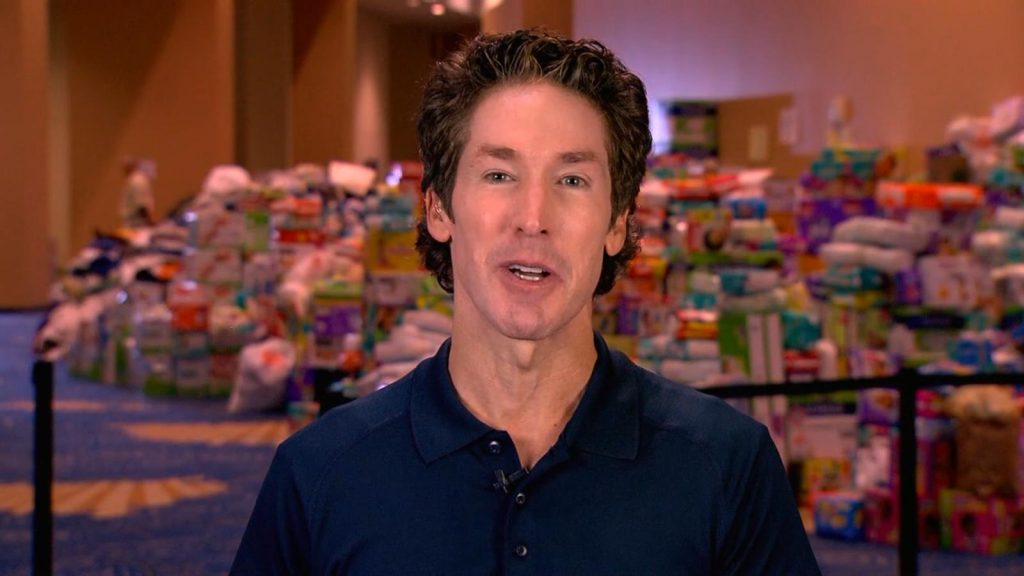 As I watched the daily coverage of Hurricane Harvey over the past seven days, I’ve marveled over the fact that the course of one’s life can change as easily as a watercourse flows. Can you imagine that one day you’re immersed in the regular monotony of life and the next day all that you know is immersed under rainwater that refuses to recede. I’ve been praying for those affected by Hurricane Harvey as they go about recovering from the ravages of this natural disaster.

Even as Hurricane Harvey developed day by day, stories of how those in its path responded developed day by day alongside it. One of those stories you’ve probably heard of by now is how Senior Pastor Joel Osteen of Lakewood Church in Houston, Texas responded. Osteen was dragged on Twitter last week when he allegedly tweeted out inspirational messages regarding Hurricane Harvey but did not open the doors of his 17,000-seat megachurch to Hurricane Harvey evacuees until he was shamed into doing so. It has been a point of contention whether the church had also been affected by the hurricane and thereby not accessible or whether that was not the case at all. A flurry of news coverage was created by this “Twitter storm” which resulted in Osteen granting various news outlets interviews to explain “what had happened was” and for damage control.

Do I believe that Pastor Osteen responded with too little too late and was shamed into opening the doors of this church? Hmmm…I’ve had to think about my own humble and small church where I’ve attended since I was six years old in forming my opinion. If Hurricane Harvey would have hit Atlanta, would my church be prepared to open its doors to evacuees? I don’t know that we would have immediately because a typical church isn’t prepared to assist in that way. When we’ve had snow storms for example in the A, church shuts down and everyone is encouraged to remain in their homes until the roads are clear and conditions are safe to gather together again. So I think it’s unfair to rush to judgment when most organizations aren’t prepared to service people in natural disasters.

That being said, if the natural disaster, storm, etc. continues, a place of ministry should develop a means to minister to its congregants and the wider community if they have resources available. A small church often does not the resources available to minister to people in the time of a natural disaster or otherwise that a large church like that of Lakewood Church, for example, has its disposal. It’s likely that as Hurricane Harvey continued, the staff at Lakewood headed by Osteen would have implemented a plan to minister to its congregants and the community even without the Twitter storm. I’m sure that many churches throughout Houston have been considering their course of action as well.

And that brings me to another point. Pastor Osteen is not the only pastor in Houston and you would think that based on the news coverage. Is he the only pastor that who did not allegedly immediately implement a plan to open the doors of the church to evacuees? Probably not. But since he is well known, he was an obvious target of scrutiny. And I’m pretty sure the people who were already not fond of his ministry which has been referred to as “prosperity gospel” were some of the loudest people criticizing him. And on the other hand, those who were proponents of his ministry before Hurricane Harvey have probably not been persuaded to not support him based on his Hurricane Harvey response.

Finally, for all of those who have worked themselves into a lather regarding Pastor Joel Osteen, my question to them is: What are you doing to minister to those affected by Hurricane Harvey? If the answer is not much or nothing, maybe all of that energy would be better directed inward or upward. I don’t know why God allows storms, literal and otherwise, in the lives of people but there are always lessons to be learned. Maybe one of the lessons from this storm is that we need each other more than we thought we did…

That’s all I got.

2 thoughts on “Do You Still Trust Pastor Joel Osteen After His Hurricane Harvey Response?”