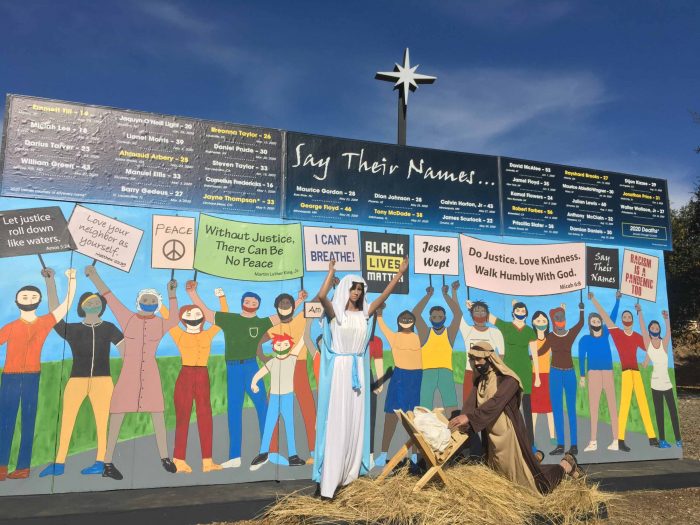 Christmas is literally hours away at this point so I hope we take time out of our busy schedules to reflect on the meaning of the season which is summed up in this beautiful verse: “The virgin will conceive and give birth to a son, and they will call him Immanuel” (which means “God with us”). Matthew 1:23

I love to see varied nativity scenes, but I’ve never seen one like what Claremont United Methodist Church in Claremont, California is featuring on its grounds! The words “Black Lives Matter” as well as other striking statements are included in its nativity scene. See an excerpt of the story “Church Makes Statement With Black Lives Matter-Themed Nativity Scene: ‘It Was a Natural Choice'” by Kerry Justich on Yahoo.com below.

A church in California is making a statement about racial injustice in America by turning its nativity scene into a display of the Black Lives Matter movement.

The scene that sits just outside of Claremont United Methodist Church in Claremont features the Virgin Mary, Joesph and a racially ambiguous baby Jesus in front of a wall of protestors holding up signs reading “I can’t breathe,” “Jesus wept” and “Racism is a pandemic too.” Just above the illustration, a sign reads, “Say their names” with a list of Black Americans who were unjustly murdered, including Emmett Till, Ahmaud Arbery, Breonna Taylor and George Floyd.

Pam Bunce, who chairs the Creative Peacemaking Committee responsible for the nativity scene at the church, tells Yahoo Life that making socially impactful statements with the display is something that they’ve done at the church for just over a decade.

“Each year we look at social justice issues, and select the theme for that year. Our church property is just a frontage road away from [a busy boulevard], so is highly visible to the community,” she explains. “We believe that, as beautiful as the Christmas story is, it’s only the beginning. We believe that Jesus came to Earth to minister to the marginalized and the oppressed. It’s not a sentimental story. It’s a bold story of commitment and service. Too often that part of the story is left out.” Read the rest HERE.

Also, below is an excerpt of the church’s theological statement, which is posted on the church’s web site, explaining its nativity scene.

Mary, the mother of Jesus, was a young Jewish woman, who lived in a remote part of the Roman Empire. As a Jew, Mary was marginalized with few personal rights and significant obligations to the Roman ruling class. As a woman, Mary was powerless in the face of those who ruled, both the Roman authorities and the Temple leaders who conspired with them…The brutal killing of George Floyd by Minneapolis police officers in the summer of 2020, along with so many other unjustified killings of unarmed Black Americans, galvanized a wide coalition of Americans to seek equal justice under the law and equal treatment in our society for people of color. We affirm and join the call for justice and equity by the Black Lives Matter movement to ensure that Black lives matter as much as any other life. Our faith in Christ challenges us to stand with Mary in her call for justice for the poor, the marginalized, and the oppressed.

Do you agree with this nontraditional nativity scene?