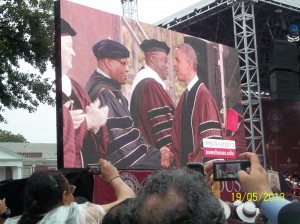 Normally I would have posted my Sunday entry on my blog by this morning at the latest, but I think you will understand why I opted to wait until later in the day for this entry. I braved intermittent rain and thunder, overflowing mud, heightened security, swelling crowds and long wait times in order to witness President Barack Obama address the 2013 graduating class of Morehouse College! 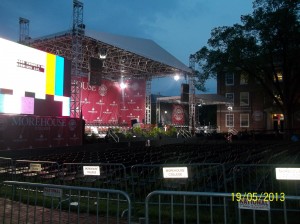 Early in the morning I arrived…

As the media arrived, family and friends of the graduates filed in as well although it was not yet daylight. I spoke with some of them to document their thoughts and feelings on this historic day. Gary Williams along with Thomasina Williams came to see their “Atlanta 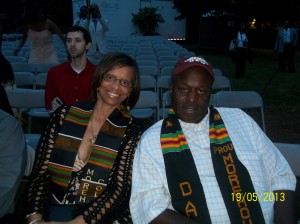 born and raised” son Garrett Williams graduate with a bachelor’s degree in computer science. “It is a great opportunity as far as Obama is concerned,” said Gary Williams, who got up at 3:30 a.m. to get one of the front row seats on Morehouse’s Century Campus. “I’m glad we have the opportunity to hear the president give his speech up close.” Thomasina Williams said she was also excited to see the president, but she was equally excited about witnessing the graduation of her son, who attended Shiloh High School. “This is the school that he chose. He was part of a program called Project Identity in high school so he got to visit different college campuses, but when he got to Morehouse, he knew he really wanted to be here,” she said. “He said, ‘Mom, if you can make this happen for me, I will never disappoint you and he hasn’t.” Gary Williams will begin working at Premedical following his graduation. 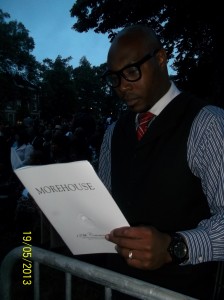 Jermaine Watkins searching through the program for the name Katanga Johnson…

Jermaine Watkins came from Nassau, Bahamas to see his mentee Katanga Johnson graduate with an economics and philosophy degree. “I used to to be one his pastors at Abundant Life Bible Church in Nassau, and I came up here four years ago to drop him off,” Watkins said. “I’m very proud of his accomplishments, and I’m excited about his future as a Morehouse man.” Johnson will begin working as a missionary journalist for Operation Mobilization in London, England. (I’ve never heard of a missionary journalism! How cool is that?!) 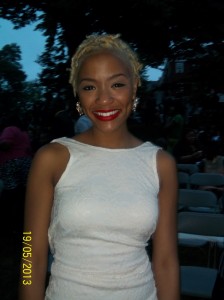 Nicole Jenkins came in from Maryland to see her boyfriend James Jeter, who is from Washington D.C.,  graduate with a bachelor’s degree in English. Following graduation, Jeter will head to New York to work as a fashion designer for Ralph Lauren. “I couldn’t be more proud of him especially because he did this in three and a half years.” 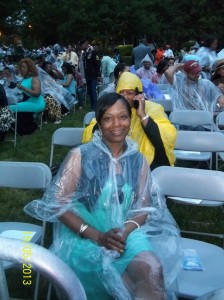 Cecelia Hewins is ready for the rain…

to Atlanta to see her godson William Stephens graduate with a bachelor’s degree in business administration. “I am so proud of him. I believe he is the first college graduate in his family,” Hewin said. While she looked forward to seeing President Obama, Hewin emphasized that his presence was not her primary reason for attending the rainy graduation ceremony. “I’m excited about my godson, and Mr. President is next in line.” Stephens will begin working for Chrysler tomorrow.

Likely due to the presence of President Obama, the graduation attracted a fair amount of celebrities such as Jasmine Guy, who portrayed the loveable but “bougie” princess Whitley on “A Different World.” I even saw Kandi Burruss of “The Real Housewives of Atlanta” along with her fiance’ Todd in the audience.

Janie Hendrix, the sister of the late Jimi Hendrix

Some of the graduates, however, were related to celebrities. I spoke with Janie Hendrix, the younger sister of deceased rock star legend Jimi Hendrix, who lives in Seattle, Washington. She was there to see her son Claytin Hendrix graduate with a bachelor’s degree in history. “Three of my four boys attended Morehouse,” said Hendrix. “I would sit through rain. I would sit through snow see my son graduate.” Claytin Hendrix plans to become a teacher.

Although the rain periodically doused the graduates’ family and friends, who were only separated from the elements by thin plastic ponchos, they continued to wait for the ceremony to start hours later.

Finally, the main event began as the graduates, 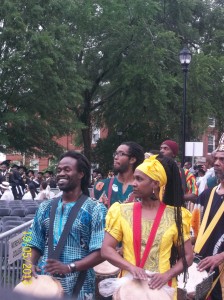 preceded by an African drumming group led by Giwayen Mata, marched in to meet their family and friends. Various notable alumni including the Rev. Raphael Gamaliel Warnock, class of 1991, were on the program; however, it was the valedictory address offered by Betsegaw Tadela of Addis Ababa, Ethiopia elicited the loudest cheers from the crowd and his fellow graduates and a hug from President Obama. His refrain throughout his speech was, “We will remember this day,” as he reminded his fellow graduates about the lessons they learned at Morehouse starting on their very first day on on campus. He also noted that while others may not remember the identity of their college graduation speaker (my hand is raised in the air unfortunately) years afterward, the 2013 class of Morehouse College will never forget their commencement 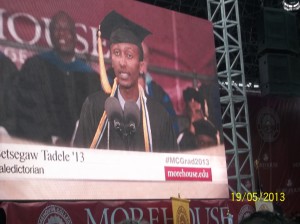 Betsegaw Tadele, the valedictorian of the 2013 Morehouse

Shortly afterward, President Obama spoke to the audience from the vantage point of the lone covered area of the ceremony layout, which was reserved for ceremony participants. The president started off by duly noting, “You all are going to get wet, and I would be out there with you if I could, but the Secret Service gets nervous,” he said as the audience laughed. “So I’m going to have to stay here, dry. But know that I’m there with you in spirit.” He also mentioned his brand new status as a Morehouse man as he received an honorary doctorate of laws degree. “You can always tell a Morehouse man, but you can’t tell him much,” he said with a laugh. 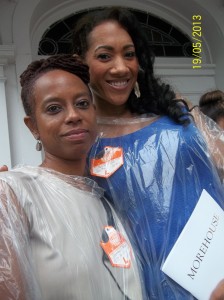 I ran into one of my fellow Georgia Bulldawgs’ Monica Cabbler…

As he continued to speak, he highlighted the rich history of the school which began with 37 men, free blacks and freed slaves, who mostly aspired to become teachers and preachers. He also discussed how Morehouse propelled the likes of Dr. Benjamin E. Mays, who served as the president of Morehouse for almost 30 years and Dr. Martin Luther King Jr., who was a freshman at the school when he was mere 15 years old.

President Obama didn’t back away from mentioning the still challenged economy but reminded the graduates that their ancestors had much more difficult obstacles and succeeded in spite of them. “If you think you can just get over in this economy just because you have a Morehouse degree, you’re in for a rude awakening.  But if you stay hungry, if you keep hustling, if you keep on your grind and get other folks to do the same — nobody can stop you. ”

While they will begin building their careers following graduation, Obama admonished the graduates to not forget their communities and be an example for those around them. “In troubled neighborhoods all across this country — many of them heavily African American — too few of our citizens have role models to guide them.  Communities just a couple miles from my house in Chicago, communities just a couple miles from here — they’re places where jobs are still too scarce and wages are still too low; where schools are underfunded and violence is pervasive; where too many of our men spend their youth not behind a desk in a classroom, but hanging out on the streets or brooding behind a jail cell.” 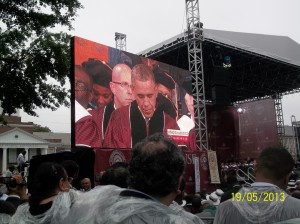 Finally, he compared being a Morehouse Man to being an American. “Members of the Class of 2013, you are heirs to a great legacy.  You have within you that same courage and that same strength, the same resolve as the men who came before you.  That’s what being a Morehouse Man is all about.  That’s what being an American is all about.”

Although the skies were cloudy and the rain had people scrambling every few minutes for shelter under trees or a few umbrellas, I’m sure, as Betsegaw Tadele said, “We will remember this day.”