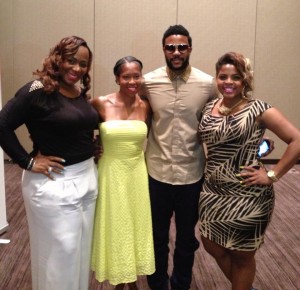 Bishop T.D. Jakes’ MegaFest 2013 in Dallas is making headlines from Tyler Perry laying hands on the bishop AND donating $1 million to help build a youth center to mega artists Jennifer Hudson, Erica Campbell, Joe and more performing at the Women of Purpose concert!

Aside from these fantastic events, it was also the premiere of “Let the Church Say Amen,” a movie based on the best-selling novel by ReShonda Tate Billingsley, which was featured as a part of the First Annual International Faith & Family Film Festival at MegaFest 2013 ! As a fellow author, I am truly inspired by ReShonda’s success, and I wanted to highlight her achievement here. Below is a summary of the movie. 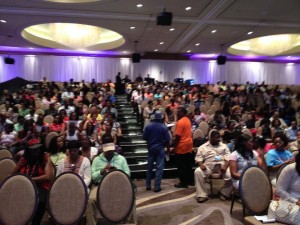 Twenty-one-year-old Rachel Jackson (Naturi Naughton) is a wayward preacher’s kid who is struggling to pull her life together. With a six-year-old son out of wedlock and a high school diploma, Rachel’s mission in life is to marry her son’s father in order to forge a traditional and respectable family and regain her father’s respect.

LET THE CHURCH SAY AMEN is a powerful journey through one family’s trials and tribulations and a remarkable story of reconciliation and love. This two-hour movie of the week will be a BET Premiere Cinema event starring Steve Harris, Naturi Naughton, Lela Rochon, Hosea Sanchez and Collins Curtis Pennie. The film is Executive produced by Reina King and co-produced by Queen Latifah, Shakim Compere, Shelby Stone, Roger Bobb and Regina King who is also making her directorial debut. LET THE CHURCH SAY AMEN is a BET Networks, Royal Ties and Flavor Unit Production.

Below is my interview with ReShonda! Check it out!

1. As a fellow author, when you wrote your book “Let the Church Say Amen,” did you ever dream that it could be made into a movie? When I first start writing, I don’t do it with a movie in mind, but of course, like many authors, I dream for all of them to be on the big screen. It just doesn’t play a role in my writing process.

2. And for my fellow authors and dreamers out there, how did this movie come to be? By being nice. I know that sounds like a cliché but I bought a book for a woman who didn’t have enough money for a book. She gave it to her sister who worked for an airport bookstore. One day, Juanita Bynum was in that store and the sister convinced Rev. Bynum to buy my book. Long story short, she did, loved it and got in touch with me to ask my permission to take it to Hollywood. The journey to where I am today was a long one, as we’ve had several delays over the years, funding issues, and normal “movie delays.” But Regina King, who was set to direct the movie and her sister/business partner Reina King, believed in the project and kept fighting for it. Eventually, they partnered with Queen Latifah’s Flava Unit and got a deal with BET, who was getting into original programming. They bought four of my other novels, including “Everybody Say Amen,” “Say Amen, Again,”and “I Know I’ve Been Changed.”

3. How is the movie different from your book or did the movie match what happened in your book? As with all novels that are made into movies, you will see a condensed version of my novel. Many people don’t know this, but they take a 300-400 page novel and shrink it to about 90 pages, so a lot of things have to go. Although there are a few key changes, they definitely captured the essence of the book.

4. What has been the most surprising experience you’ve had as you watched your words being turned into a movie? The most surprising experience I would have to say is that they let me be a part of it from beginning to end. When production companies buy your novel, you sign the contract and receive your check, which is normally where the communications stop. It is rare that they let an author be involved, so I am extremely blessed to be involved behind the scenes, and on camera. Yes, I also have a small part in the movie…yes, a speaking part. But perhaps the best feeling was watching the crowd reaction at the recent screening of the movie. I had seen the movie, but watching it with a crowd, that loved it, made me feel …. Full.

5. I know you probably can’t pick favorites, but what actor in the movie is your favorite and why? And if you don’t want to answer that, how have the actors brought your story to life in a way that you haven’t thought about before? What was it like to work with Regina King? Oh, my God, I can’t. For real, because they were all phenomenal. I couldn’t have asked for a better cast! Each actor brings their own flavor to make their character come to life. And to see the passion and commitment they brought to the roles meant the world. It’s like each person chosen was meant for that role. Casting director Robbie Reed did an AMAZING job. And Regina, I simply love her. Both her and her sister. They made sure that I was not only included, but happy with the direction of the story and the characters. I was a fan of Regina before. But just based on her on-screen work. Now, it’s how she is off-screen that has made me a fan for life.

6. How was your film chosen to be screened at MegaFest, and is this the first time the film has been shown to an audience? What did you think? What did the audience think? It was chosen to be screened at MegaFest because of T.D. Jake’s relationship with BET. BET believes in this project and worked with him to make it the official television entry at the festival. This was the first time it was shown to an audience. Seeing it for the first time on the big screen was priceless. I’ve never been so excited and proud. (I only wished my mom could have been sitting in the audience watching.) The audience, which was a seating capacity of 800 people, was full and we had to turn away hundreds of people. They loved it. They laughed, cried and gave a standing ovation when it was over. It was the highlight of my literary career. (That, and winning the NAACP Image Award in 2012)

7. What’s next for the movie? And also, besides this current movie, which book would you like to see made into a movie next and why? I don’t have an actual release date yet. They’re still working out the details because there is the possibility that it could go to the big screen (say a prayer, y’all). Once I know, I’ll make sure all my readers know as well. As I said earlier, I would love to see all my books made into a movie. But honestly, if I had to pick, my top three would be “The Secret She Kept,” “Holy Rollers,” and “I Know I’ve Been Changed.”

Also, please share anything else you would readers to know! I would like to thank all my readers for their continued support and I urge them to follow me on facebook at reshondatatebillingsley and on Twitter at Reshondat so we can keep them updated on the movie.