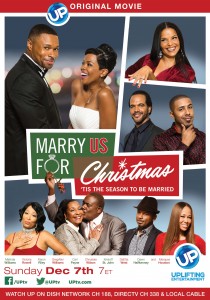 I must admit since I got engaged two years ago in December, not only is this month a time to celebrate the birth of Jesus Christ, I also reminisce about how Robert totally surprised me by proposing to me. So when I heard about the movie “Marry Us For Christmas,” I knew I had to write about it on this blog…

Below is the official description –

In the sequel to last year’s popular UP Original Movie “Marry Me For Christmas”, it’s a year after Marci Jewel (Malinda Williams) and Blair Kirkland (Karon Riley) declared their love for each other and decided to tie the knot.

But as the big day approaches, Marci is so consumed with work that she’s had no time to plan her wedding.  To make matters worse, she may have to team up with former assistant/fake fiancé Adam to win a project she’s been vying for – a little tidbit Marci has held back from Blair.  But Blair, as it turns out, has a secret of his own.

Thanks to years of doing pro bono work for financially-strapped clients, he quickly is running out of cash and might have to accept an offer to work for his longtime nemesis, Marci’s manipulative cousin Preston (Carl Payne).  Meanwhile, Marci’s mother Stephanie Chandler Jewel (Victoria Rowell) is making some rather bold moves of her own with her sexy salsa teacher, Antonio Simpson (Marques Houston), who is more than a little smitten with her — and about 20 years her junior.

Will there be a wedding for Christmas?  Better yet – whose wedding will it be?   Naturally, the festivities wouldn’t be complete without family, including Marci’s Uncle Donald (GregAlan Williams), Aunt Myra (DeEtta West), Aunt Elizabeth (Chrystale Wilson), Charlene (Dawn Halfkenny) and Antonio’s uncle Lawrence Simpson (Kristoff St. John).

I interviewed Malinda Williams about being a part of this movie and her journey in the entertainment industry. 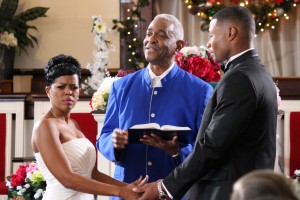 1. When I think of all of the roles you portrayed from Tracy ‘Bird’ Van Adams in “Soul Food” to Casandra in “The Under Shepherd,” I think my favorite role of yours is Young Alicia in “The Wood” which you portrayed as an adult. I loved that movie because the movie captured a time period that people in my generation can appreciate. How do you stay looking so young?

I’ll tell you something. My grandfather is 104 years old. And he is still completely healthy. He can hold a conversation. He probably remembers every grandkid’s birthday. I guess I have to say first and foremost: I just have really good genes. And then I do what I can to maintain that. I’m not not super healthy. Sometimes I indulge myself. I drink a lot of water I do know that. But I think it’s mostly just my genes.

2. How did you get into the entertainment industry in the first place?

I’ve been acting since I was 10 years old, doing television commercials, modeling. It was something extracurricular that my parents got me involved in. But I thought my actual career would be cosmetology, but because I had this other skill – this acting thing – I moved to Los Angeles. But I only came here because I hadn’t gone to a university or a college so I hadn’t left home. So I said to myself, ‘I gotta get out of this house.’ I thought of all the places I could move to where I could make a living. I thought I could do hair in L.A. and if I needed to do a television commercial or modeling, I could do that there to. I said, “I’m going to L.A. for three months, and I’ll see what happens.’ I got my first gig within two weeks and really haven’t stopped working since.

3. So do you still do hair at all? And I’m guessing that because you can do hair, you are the one that came up with your signature style – short and sharp.

For the most part, I really just do my own. But I do have some friends who will be like, ‘I’m coming over for a cut or for a blow out. I need you to trim my hair.’ But I don’t do it for a living or a side hustle. I did for many years work in a salon when I was out of high school and out of cosmetology school. It is definitely a passion of mine.

And as far as my style is concerned, I don’t think I decided. It decided for me. I grew up with very long hair down my back, and people would say you have such pretty hair. When I was in my 20s as an actress, I didn’t want to be identified as the pretty girl with long hair. I know that sounds crazy. But I wanted people to value me for my work not just how I looked. What is very interesting to me now is the very thing I tried to avoid by cutting my hair off was the thing I’m identified for now. I’m partly identified by the way I look. So I stopped running from it and I owned it.

I have done some projects with Swirl Films before. They produced both movies. They do lots of projects for UP television. Eric Tomosunas [CEO of Swirl Films] is a good friend of mine, and he called me and said, “I’m doing this movie, and I would like for you to do the lead.” When I read the script, I thought it was a sweet movie and it was well-written. Rhonda Baraka wrote it. And then my talk show was on ASPiRE, the sister network to UP so I thought it was all in the family. Plus I had never done a holiday project so I thought it would be fun. 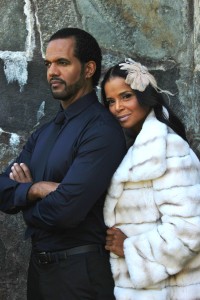 We have new cast members. Kristoff St. John who plays “Neal” from “The Young and the Restless” is in the movie. And Victoria Rowell is in the movie again so people get to see Neal and Drucilla from “The Young and the Restless” back together again.  Marques Houston, who is a singer and was on “Sister, Sister” is in the movie. He’s got the comedy. Karon Riley, who I absolutely adore and plays my fiancé, is back. He’s the husband of one my dearest friends which made it little bit awkward.(laughter)

6. As you mentioned earlier, in addition to being an actress, you are also one of four co-hosts on the talk show “Exhale.” How did that happen?

That is a very interesting story. I actually befriended a young woman on Twitter. She sent me a direct message. I sent her a direct message. She was asking me for advice and one day I gave her my e-mail address. I said, ‘Listen, there aren’t enough characters here for me to tell you what it is I need to tell you.’ So we started corresponding electronically. I kind of thought I would be a mentor to her because she wanted to get into the entertainment industry.

And then one day, she texted me and she said, ‘I am working with someone who is casting a talk show and they are looking for an actress, would you be interested?’ I said, ‘Of course I would be interested.’ And I said, ‘Wow, here is someone that I would mentor, that I thought I was helping, and she was actually helping me.’ And we still have a relationship. It was really random. I don’t respond to everyone in that way on Twitter, but for some reason, I was feeling in my spirit that I needed to respond to her. And now I know why.

7. Finally,  to what do you attribute your longevity in the entertainment business?

I think another thing is I kind of try to keep it pretty classic. I don’t tend to do things that are trendy. Or of this era. I try to do projects that are classic that stand the test of time. “Soul Food” is about family. It’s about love. It’s about relationships. And those things don’t go away. That helps to make my character, the Malinda Williams character, if you will, almost synonymous with something that is timeless. I didn’t necessarily start out with that effort in mind, but that is how it played itself out. That is partly why I’m still here.

Below is a video snippet from “Marry Us for Christmas.”