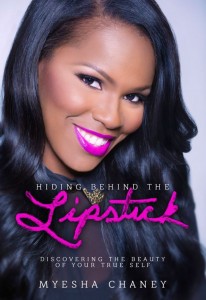 If you’re a fan of “Preachers of L.A.,” I’ve got great news! Myesha Chaney, First Lady and executive director of Antioch Church of Long Beach and wife to Antioch Senior Pastor Wayne Chaney, is headed to the A as a part of the “Hiding Behind the Lipstick” Tour.  She will be hosting the women’s empowerment event, on which her new book “Hiding Behind the Lipstick” is based, at the dReam Center Church of Atlanta, 4209, Northeast Expwy, Atlanta, GA 30340 at 7 p.m.

If you’re unfamiliar with First Lady Myesha, she is also a songwriter, recording artist, motivational speaker, worship leader, and entrepreneur. In addition to starring on “Preachers of L.A.” First Lady Myesha and Pastor Wayne also co-host ““Real Life with Wayne and Myesha Chaney,” a radio talk show on KJLH, 102.3.  They are also the parents of three children: Wayne, Reign, and Cadence.

Below is my interview with First Lady Myesha about her new book, Preachers of L.A., her family life and MORE…

How did you come up with the “Hiding Behind the Lipstick” concept and write the book?

It was an answer to prayer. I was a young pastor’s wife, and I felt the expectations of others, and I saw the condition of the women that were in my sphere of influence. And I felt like everyone was just kind of putting on their best face, and they were presenting what they wanted people to see, not the truth. I didn’t want to live a life where I felt I had to be perfect, and I had to not have flaws so I asked God what can I do because I can’t live this life, I don’t want this so He gave me this concept of hiding behind the lipstick.

So I spoke about it at our women’s retreat, and it was so effective that we decided to do it again, and we kept doing it. And I said we need to put this in book so that we can reach more people. So it began as a women’s empowerment event that we host in different cities all across the country, and it’s also a book. Two different things but the same concept.

Tell me more about the women’s empowerment event and what happens.

We start off with some kind of musical component like a praise and worship. We play a video where women do what we call “lipstick confessions,” and they share things that you didn’t actually know about them or you don’t see it on the surface, but it is the truth. We do skits, we have dance, all of these things illustrate the pain we sometimes carry. We  have cardboard testimonies when women actually get up and they have where they were on the front and and they will turn it over and show where they are now. And I’ll get up and do a 40-minute talk about the whole concept of hiding, and I use a woman from the audience and do a kind of facial on the woman to illustrate the various things we do before we put on concealer which is hiding the imperfections. We end with allowing women to get up from the audience and stand and share what their lipstick was. And somehow between all of these elements women are much freer than they have ever been before, and they can share things and get healing for things they have had to struggle with their entire lives.

What has been the response to the women’s empowerment event so far?

I have met women that have said, “Oh my God after 21 years of being the way I am, I finally changed,” and that is more than enough for me. I did it out of obedience. I didn’t attach anything to it. Sometimes we do things because want to make our name great and make our mark, but this is not one of those ministries. It is a labor of love.  So if a girl pulls me aside and I says, “I know you,” and I’m thinking it’s from the “Preachers of L.A.”or from Antioch Church, but she says, “You do that lipstick event,” that to me is more than enough for me.

Women at #HBTL feel safe enough to share things they have never shared before. Atlanta, I pray you are ready for this! Get your #free ticket at hbtlatltour.eventbrite.com and share in this experience. Watch Liz’s story (link in bio)!

I’ve done the workshop over 20 times in cities like L.A., Oakland, Detroit and in Texas in Florida. We’re going to D.C. It was shown on episode 10 of “Preachers of L.A.” too. 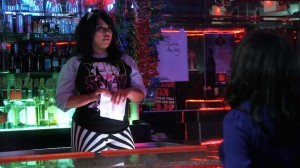 First Lady Myesha inviting the owner of a strip club to come to “Hiding Behind the Lipstick,” from episode 10

How did you become a part of the “Preachers of L.A.?”

Actually, it was my husband. We had been in pitch meetings and kind of in that entertainment space. We prayed toward that from some years prior before any meetings. So when “Preachers of L.A.” came about, my husband was approached, and he was open to it. And I decided to do with him, and it has been a great experience.

How has the show changed your life and the lives of your family?

It has allowed us to reach more people. From Day One, I decided if it helped me to do “Hiding Behind the Lipstick,” easier, I was grateful. I got out of it what I wanted to get from it. I have been able to reach more women. We were on radio for three years so we were quite familiar in this region already. It hasn’t been an overwhelming change. People see you out and want to take pictures more so that has been the only difference that I have experienced. My kids want to be on TV more. They say, “They need to show more of us,” and I’m like, “Really kids?”” But we have normal lives, and our kids have a normal lives. It’s an opportunity that God has given us, and we are grateful. 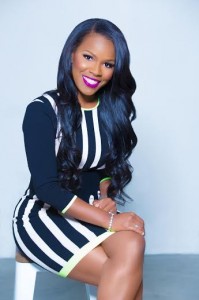 What has been your favorite story line on “Preachers of L.A.?”

I know for us, we dealt with a lot of family issues as well as the other cast members. It was phenomenal to see the pastors help reconcile things in their family relationships. So that was the most moving story line I think, the stories of us reconciling with family.

One of my favorite story lines is the relationship of Bishop Noel Jones and Loretta. Are they ever going to get married?

(Laughing) I have no idea. I will be sitting and watching and waiting like everyone else.

To register for “Hiding Behind the Lipstick” in Atlanta, go to eventbrite.com. Free & VIP tickets are available!

2 thoughts on ““Preachers of L.A.’s” Myesha Chaney is Coming to Atlanta This Friday/MY INTERVIEW…”