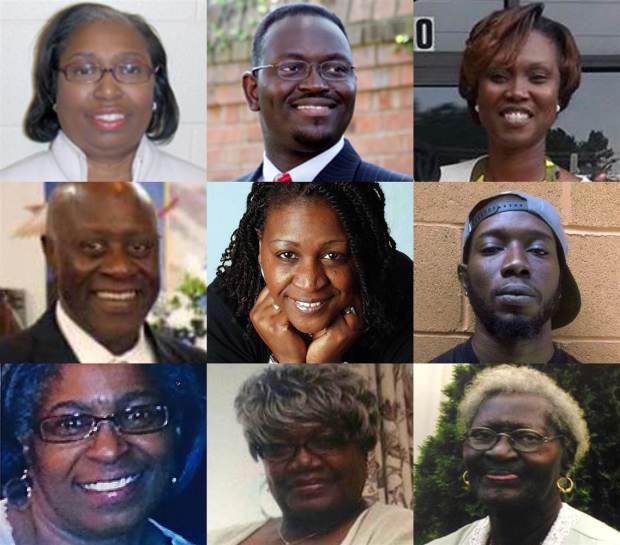 Much has been said about the unmerited forgiveness that some of the family members of the victims’ of the Emanuel AME Church shooting offered to Dylan Roof to his face at his first court appearance in South Carolina about a week ago.  Some praised the families’ stance while others have criticized their stance such as Stacey Patton who wrote The Washington Post article “Black America Should Stop Forgiving White Racists.” Most recently, President Obama added his thoughts on their forgiveness, praising the families’ stance in his eulogy of the slain Pastor Clementa Pinckney on Friday…

He didn’t know he was being used by God.  Blinded by hatred, the alleged killer could not see the grace surrounding Reverend Pinckney and that Bible study group — the light of love that shone as they opened the church doors and invited a stranger to join in their prayer circle.  The alleged killer could have never anticipated the way the families of the fallen would respond when they saw him in court — in the midst of unspeakable grief, with words of forgiveness.  He couldn’t imagine that.

The alleged killer could not imagine how the city of Charleston, under the good and wise leadership of Mayor Riley  how the state of South Carolina, how the United States of America would respond — not merely with revulsion at his evil act, but with big-hearted generosity and, more importantly, with a thoughtful introspection and self-examination that we so rarely see in public life.

I agree with President Obama. Forgiveness is a powerful stance, and below are seven Scriptures that back up what I believe…

1. First of all, forgiveness, when graciously extended to the offender, is healing to the person who offers it…I’ve heard that resentment is like drinking poison expecting the other person to die…The same is true of unforgiveness…To not forgive is setting yourself to be forever tied to poisonous negativity…Forgiveness is the beginning of healing as is said in James 5:16 “Therefore, confess your sins to one another and pray for one another, that you may be healed. The prayer of a righteous person has great power as it is working.”

2. Also, when you choose to forgive, you are opening yourself up to God’s blessings. But when you choose to not forgive, you are blocking your blessings…Read Mark 11: 24-25 “For this reason I am telling you, whatever you ask for in prayer, believe (trust and be confident) that it is granted to you, and you will [get it]. And whenever you stand praying, if you have anything against anyone, forgive him and let it drop (leave it, let it go), in order that your Father Who is in heaven may also forgive you your [own] failings and shortcomings and let them drop.”

3. In her article, Patton said, “Historically, black churches have nurtured the politics of forgiveness so that black people can anticipate divine justice and liberation in the next life. This sentiment shaped non-violent protest during the civil rights movement. A belief that displays of morality rooted in forgiveness would force white America to leave behind its racist assumptions. But Christian or non-Christian, black people are not allowed to express unbridled grief or rage, even under the most horrific circumstances.” I get where she is coming from, but I disagree. Choosing to forgive is not repressing grief nor rage. As we all know, emotions change from day to day. But when we make the choice to forgive even if our emotions contradict that decision from time to time, God rather than the evil one will see us through through emotions as is noted in 2 Corinthians 2: 10-11. “If you forgive anyone anything, I too forgive that one; and what I have forgiven, if I have forgiven anything, has been for your sakes in the presence [and with the approval] of Christ (the Messiah). To keep Satan from getting the advantage over us; for we are not ignorant of his wiles and intentions.”

4. Patton mentioned non-violence and how it shaped the Civil Rights Movement…I believe that without the tool of non-violence, the world over would haven’t been drawn to support Dr. King and others who, in the face of unspeakable violence, chose to not respond in kind…The same is true of forgiveness…As President Obama noted in his eulogy of Pastor Pinckney, the families’ forgiveness has forced America to take a fresh look at racism and all of the symbols that support it….This is the sentiment of Romans 12: 17. “Repay no one evil for evil, but give thought to do what is honorable in the sight of all.”

5. Also, choosing to forgive someone does not mean the person will not get what is coming to the person…But it is not our responsibility to get revenge…He or she will get what is coming to him or her…God will see to it as is noted in Romans 12:19 “Do not take revenge, my dear friends, but leave room for God’s wrath, for it is written: ‘It is mine to avenge; I will repay,’ says the Lord.“

6. And please know that forgiveness does not mean that we don’t seek justice. Read Isaiah 1:17 “Learn to do good; seek justice, correct oppression; bring justice to the fatherless, plead the widow’s cause. “

7. And lastly, forgiveness does not give white racists a pass…The Confederate flag is a symbol of hatred not heritage…As President Obama said in his eulogy, “Removing the flag from this state’s capitol would not be an act of political correctness; it would not be an insult to the valor of Confederate soldiers.  It would simply be an acknowledgment that the cause for which they fought — the cause of slavery — was wrong  — the imposition of Jim Crow after the Civil War, the resistance to civil rights for all people was wrong.  It would be one step in an honest accounting of America’s history; a modest but meaningful balm for so many unhealed wounds.  It would be an expression of the amazing changes that have transformed this state and this country for the better, because of the work of so many people of goodwill, people of all races striving to form a more perfect union.” Shout out to Bree Newsome!  As is stated in the Bible in Romans 10:12 “For there is no distinction between Jew and Greek; for the same Lord is Lord of all, bestowing his riches on all who call on Him. “

In response to the Emanuel AME Church shooting, The Balm In Gilead has added Church Emergency Preparedness to its roster of plenaries and workshops for faith leaders, health directors, doctors, nurses and all those involved in congregational-based Health Ministries at Healthy Churches 2020 Conference, (www.healthychurhces2020.org) November 4-6, 2015 located at the Hilton Charlotte University Place in Charlotte, NC.