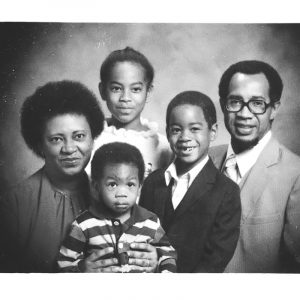 Me and my family….

Since Black History Month, the shortest month of the year, is not over yet, check out an article I wrote about my personal Black History LOL for Christian Standard this month. I was blessed to be able to write about the ministry of my father Dr. Denzil D. Holness, who recently retired after 38 years serving as pastor of Central Christian Church in Southwest Atlanta. Although I lived with my father as I grew up and again for a few years after I graduated from college, I still discovered some things about him that I didn’t know. In fact, I think everyone should interview their parents beyond the day-to-day interactions because I’m sure you will gain a new perspective on the people whose genes you share…

Had Denzil D. Holness been hired as a pastor in Coward, South Carolina, or Peculiar, Missouri, or any other out-of-the-way American town or city, he may not have been led to take on racial reconciliation in the Christian church. However, since Holness was hired as the first black pastor at Central Christian Church in Atlanta, Georgia, “The City Too Busy to Hate,” it would seem tackling racial reconciliation was God’s plan for him all along.

Holness became CCC’s pastor in September 1979 and in December 2017, he retired from ministry after 38 years serving that church. Holness began his journey with the Christian church when he was a teenager in his homeland of Jamaica, which boasts the motto, “Out of Many, One People.” Originally a member of the Anglican church, Holness was persuaded by a friend to join the Christian church because of its principles.

“The more I learned about the Christian church, the more I became committed,” Holness said. “For example, we believe that all Christians should be one. We don’t use denominational labels or names. If the world is to be won to Christ, then believers should bear witness to a visible unity in accordance with the Lord’s prayer in John 17.”

Just before Holness graduated from high school, Fred Kratt, a missionary from the United States, visited Jamaica one summer and was instrumental in arranging for the young man to receive a full scholarship to attend Minnesota Bible College, Kratt’s alma mater.

“Prior to receiving that scholarship, I had been under the conviction that the Lord was calling me to the ministry,” Holness said. Although he received a catalog about the school before he started there, he did not realize Minnesota was much colder than sunny Jamaica. “That first winter, it was so cold, I almost cried,” Holness said with a smile.

Fast forward from the 1960s to April 1979. By then, Holness was married to fellow Jamaican Alice May Holness, and they had a daughter, me, and a son, Delvall.

Read the rest of the story at christianstandard.com.