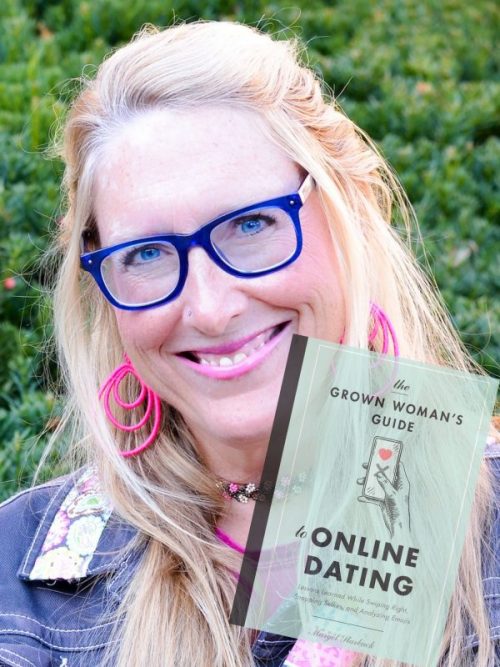 If you’ve been a subscriber of this blog for some time, you know that I’m passionate about OWN’s Greenleaf, but you also know that I’m passionate about dating. Just use the search bar on the right to dig up the almost innumerable posts I’ve crafted on the topic since launching this blog in 2008! And my debut novel, which was released in December, was about this very topic. So whenever I find a new book – fiction and nonfiction – that I feel adds value to this topic, my goal is to share it here. My new friend New York Times bestselling writer Margot Starbuck has written a must-read for mature women who are considering getting modern with their dating: i.e. online dating. Below is the synopsis for The Grown Woman’s Guide to Online Dating: Lessons Learned While Swiping Right, Snapping Selfies, and Analyzing Emojis which will be released on Tuesday! Also, check out my interview with her below. Finally, and here is some big news: I will be at her online launch party on Thursday!!! And you can attend and virtually meet me 🙂

Does the thought of joining a dating site invoke feelings of fear and anxiety—or, worse, insecurity or unworthiness? If so, then The Grown Woman’s Guide to Online Dating is the book for you. With practical advice about how these sites work, what to expect, and when to join and quit, along with proven tips for making the most of them, The Grown Woman’s Guide equips readers with all they need to take the plunge.

Four years after an unexpected divorce, bestselling writer and funny lady Margot Starbuck found herself venturing into the unknown waters of online dating. What she discovered surprised her—and changed her. With her signature sharp wit and a solid biblical foundation, Margot shares what she learned, including how to:

So dive into embracing your true value and drawing closer to God even in the midst of fear and questions. Because whatever your endgame might be, richness awaits. Margot promises, “You got this, girl!”

1. In the beginning of your book , you write that dating is different for “mature” ladies approaching their fifth decade and that you are the girlfriend that you needed when you first jumped into the “online dating trenches.” What is the most positive thing about online dating as a divorced grown woman and what is the most negative thing?

I think there are a few benefits to dating as a woman who’s a bit more “seasoned.” Lol. First, I know who I am. Comfortable in my own skin, I have less of a need to be who others—family, friends, men, culture—want me to be. I know who I am and I like who I am, which is a win for everyone. Second, I’m more self-aware. Because of God’s gracious healing, through prayer and therapy, I can notice some of the hurts I’ve endured in the past—in childhood and adulthood—and they don’t have to be the boss of me. Finally, I’d say that the rose-colored glasses I might have worn as a younger woman, have been removed! I’m keenly aware that we are all broken people, recipients of God’s grace, who have to work hard to love one another.

As for the most negative thing…hmmm…I think it’s the same thing younger women face as well, which has to do with the “culture” of online dating. Without shared friends or colleagues or acquaintances, there’s no accountability for poor behavior. So rather than treating others with dignity and respect, a lot of folks take the easy way out: ghosting, breadcrumbing, and even “blocking” others because it’s easier than having a conversation that’s grown.

I’m glad you asked! In a distant third place, right now, is eHarmony. This site lets you identify how important faith is, in a match, and I really appreciate that! I think that helps me find folks who are likeminded in that way. Bumble is in second place for me. When both people swipe right, Bumble matches you up, and the woman must send the first message. Because it does give that agency to women, I make up that it weeds out some guys who couldn’t handle that. And…drumroll…my #1 fave right now is Match. I love their versatile “search” function that lets me set all of my preferences for geography, age, faith…everything. And there also seem to be a lot of folks using Match. It’s been the most fruitful site for me to connect with folks.

3. You wrote, “Research shows that 33 percent of women have sex on the first encounter with someone they’ve met online. So as you’re getting to know a new man, even one who shares your faith, at some point you’ll need to discuss sex.” You’re a Christian and you mentioned that one of your girlfriends, who is also a Christian “has met over a dozen Christian men online and not one of them shared her value of waiting for marriage to have sex.”  That was an issue for me too while I was dating. What’s up with that?

I imagine there are a few reasons for this.

Secondly, in 2020 there is a broad spectrum of Christian views on sexuality among those who are committed to their faith in Christ. And that’s exactly why I think it’s so important to be able to discuss it.

4. You had a conversation that forever changed your approach to dating with an Uber driver, but you discovered that he was a doctoral candidate in relational psychology. How did this encounter impact your first impressions of potential dating partners or did it?

I’d noticed that, again and again, I was attracted to the same kind of guy, and that it never worked out! I kept connecting with guys who were at a geographic distance and were often emotionally unavailable. So when I discovered my Uber driver was a relational savant, I demanded that he tell me why I was—and plenty of others were—broken like this.

Len says that we’re attracted to the person who has the qualities of the parent who gave us the hardest time growing up. My dad lived out of state, and so I was always trying to get his attention and show him that I was worth loving. (When Len unlocked it all for me, I may have even heard strains of my childhood theme song, in relation to my dad, who lived out of state: I’m Gonna Make You Love Me.) If my dad, or if this guy in Utah, knew how awesome I was, I’m sure I could make them love me. Lol! Len says that what drives us is the wish, “Maybe this time I’ll get the love I need and justly deserve.” Powerful, right?

5. One of the things that I enjoyed in your book is the diversity of quotes from notable women, how did you come across this quote from Lil’ Kim and why did you think it was necessary to include it? (All my life, men have told me I wasn’t pretty enough—even the men I was dating. And I’d be like, “Well, why are you with me, then?” It’s always been men putting me down just like my dad. To this day when someone says I’m cute, I can’t see it. I don’t see it no matter what anybody says. —Lil’ Kim)

Well, I’m sure I was not searching for dating wisdom from Lil’ Kim, but when I came across it online, I thought it resonated with the experience of so many of us! I’m a big believer that what we experience from our earliest caregivers shapes us in powerful ways, like my dad living out of state when I was a girl and me falling for guys who are “out of reach” or “unavailable.” I thought that connection Lil’ Kim made between her dad putting her down and then her “ending up” with men who treated her the same way was so powerful.

I encourage any woman who’s dating to pause and really take a hard look at what they learned about their “lovability” from their earliest caregivers. As someone who was relinquished for adoption, and then endured the divorce of my adoptive parents, as well as their divorces from their subsequent spouses, all before I was sixteen, what I learned was this: I’m not worth showing up for. I’m not worth sticking around for. I’m not worth knowing. I’m not worth loving. And my husband leaving me seven years ago to be with a man did not help! God has been so gracious to replace those lies with His truth. God’s Spirit helps us notice those naughty lies and replace them with what is most true.

6. As a white woman seeking love through online dating, why was it important to include the advice from women of color seeking online dating in your book? And I agree with this paragraph “Some men want to experiment dating someone they consider ‘exotic.’ Some men, often white ones, have heard rumors about what it is like to be with a woman of another race, so they’re interested in ‘trying’ it. These men may be more interested in using you, in ways that may or may not include sex, than in truly getting to know who you are.”

The short answer is that my hope and prayer is that my book will be read by women who are and are not white. Lol. That said, I have obviously only dated as a woman who is white.

7. At the conclusion of your book, readers will learn that you’re still waiting for Prince Charming and that it has been years. For one of your friends, it’s been 55 years! Some people may think what I do have to learn from her about successful dating. She’s still dating?  What do you say to those people?

That. Is. Fantastic! When I started writing the book, I had definitely planned to be booed up by the time the book released. But…no such luck.

Don’t buy and read the book if you think it’s going to have the magic secret to meeting and marrying the man of your dreams yesterday. But if you want a friend who’s been in the trenches, and who believes that she is worth loving, and who has listened and learned from other women on this journey, and thinks about identity and dating theologically, and is convinced beyond a shadow of a doubt that you are loved and worth loving, then this book might be for you.

Join me at Margot’s launch party!!! See the details below…

During a pandemic, what’s better than girls night out? Girls Night In!

Get comfy in your favorite p.j.s (don’t worry, you won’t be on camera), pour yourself a glass of vino, and unwind with the girls. The excuse is the release of Margot Starbuck’s The Grown Woman’s Guide to Online Dating. But this night is about YOU! 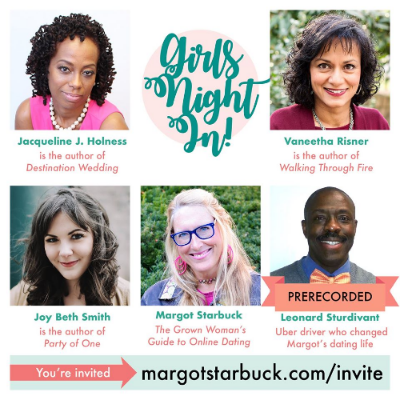 Who? All The Single Ladies (And Our Married-Lady Friends)

What? FREE Girls Night In with Margot & the girls.

Got a conflict? When you register you’ll receive a link to view after the event!

Where? We’ll email you a link before the event!

When you invite three friends you’re entered to win a guest Zoom visit with Margot and your book club or girls group! (Just email grownwomansguide@gmail.com to let us know you invited your girls)

REGISTER BY CLICKING ON HERE ON EVENTBRITE.COM!!!