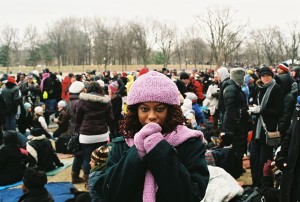 (Editor’s Note: This post was originally published in January 2009, and since I won’t be able to make the inauguration of President Obama this time around, I wanted to remind you and me of the first time our nation’s first black president was inaugurated….oh the joy and wonder of it all…and it’s happening again…Glory to God!)

I know the hearts of the single ladies are palpitating as they read this post…Let me stop the madness right now! No, this is not a post about me meeting “The One” per se. But this is a post about the wedding of sorts that took place less than a week ago on Jan. 20.

As you may have guessed, yes, I am referring to the swearing in of our 44th president, Barack H. Obama.  And by the grace of God, I was among that number that bombarded the mall to nearly witness the miracle. (By nearly, I mean I was there but I saw the ceremony via a JumboTron.) While I was in our nation’s capital, I was able to take part in many events. Thanks to the hook up of my girl, I, I was able to attend the “Refresh The World” Symposium at Howard University. Movie director Spike Lee was one of the sponsors, along with Pepsi, of the event.  It was off the chain, but more about that later!!!

Rev. Jesse Jackson was one of the panelists in the “Refreshing Black America – The Impact of Barack Obama” discussion.  CNN commentator Roland Martin served as the moderator for this discussion. The other panelists were Princeton University professor Dr. Cornel West, National Action Network President Rev. Al Sharpton, CNN contributor and political analyst Donna Brazile, “Washington Times” deputy editorial director Tara Wall and CNN contributor and political analyst Amy Holmes. I told you it was off the chain, but again, more about that later… 🙂 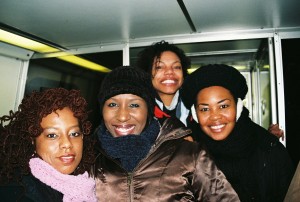 But back to Rev. Jackson. He mentioned that the whole rise of President Obama was similar to a great romance. It started off with the introduction. For many of us, that was Obama’s primary win in Iowa although I do remember his wonderful speech at the Democratic National Convention years earlier. The election cycle was the courtship phase. His election in November was Obama’s proposal to us, and we happily said, “Yes!” or rather, “Yes, we can!” And the inauguration activities represent a grand wedding celebration.  When he offered that analogy, it clicked! Yes, that’s exactly what it felt like in DC last week. It felt like we were all basking in love as we braved the bone-chilling temperatures (at one point, me and my girls had to walk a few blocks from a Metro station to our hotel one night…It was so cold I had to tell myself that  if the ancestors braved the Middle Passage, surely I could make it although the wind and cold were steadily turning my hands into frostbitten claws)  and overwhelming crowds to usher in history.

The morning of the inauguration at approximately 6 a.m. , throngs of people were nearly shutting down the Metro station as we began our trek to the mall. As we made our way through the station, a voice that sounded like Miss Sophia  from V-103 in Atlanta greeted us over the Metro PA system.  “Good Morning everybody,” the voice said. “Obama not getting up for five more hours so y’all be patient and be courteous. We want y’all to be patient, courteous and smile.” Of course, everyone laughed, and whatever tension was in the air melted even as the frigid air greeted us as we rode the escalator up to exit the station. 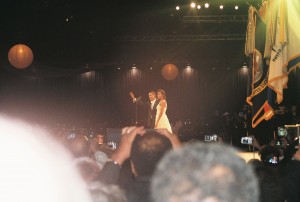 I imagine that God was pleased as people of all races didn’t mind bumping up against one another to show support for our new president. I saw as many white people as I saw black people. I saw Indians and Asians. I saw the very young and the very old. I saw people who were wheelchair bound. I heard accents from across the world. While at the mall, I got separated from my friends and so for many hours, I was alone among the million. As I waited for the hours to pass in the cold before the inauguration ceremony began, I spotted a nearly inconsolable little boy to my right.  I know he was crying because it was so cold. His tears probably froze on his little face.  I wanted to cry too. It was that cold.  I mean at one point, I thought about fainting right there…I thought maybe if I lost consciousness, I couldn’t feel the cold. I consoled myself by saying, “this is for Barack” and other similar statements. Surely, this is what being in love feels like…you find yourself doing things you wouldn’t ordinarily do to show your support and love.  Please believe this Island girl wouldn’t brave the cold for just any ole body.

And did I mention that I was drugged up on TheraFlu and ibuprofen the whole time? Yes, I was feverish the whole week. But every morning I was there, I drug my body out of bed, wore thermal underwear for the first time along with other layers of clothing, took some swigs of TheraFlu, popped some pills and went on my way.  (Actually, a whole week later, I’m still not quite right so y’all pray for me.)

Now, I know Barack ain’t the Savior! Dr. Cornel West made sure that everyone in the symposium knew that with his eloquent quips and quotes. One of my favorite quotes was when he said Obama has been able to “neutralize white anxiety while capitalize on black solidarity.”  West also warned us not to confuse “the cross with the flag.” Of course since the symposium was held on MLK day, he mentioned that at the time of his death, Dr. King had the same approval rating as Bush had at the end of his presidency. I believe West was referring to King’s approval rating among blacks. As you probably know, King was waging a war on poverty when he was assassinated meanwhile blacks had gotten well-adjusted to being well-adjusted, said West. I think he was saying that if Obama really intends to enact true change, his decisions will not please everybody…y’all know how the saying goes. ( “You can’t please everybody all of the time.”) 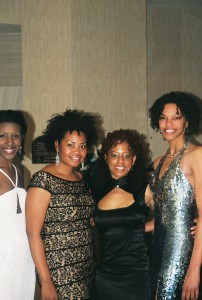 get to the presidency all by his lonesome. She gratuitously “big upped” Rev. Jackson for paving the path with his presidential campaigns in 1984 and 1988.  I so love it when we black women publicly lavish praise on our black men. It’s not done enough.  In fact, her words showed a generosity of spirit that officially made me a fan of hers. My favorite moment of the symposium was at the end when the song “Happy Birthday”  by Stevie Wonder blared throughout the auditorium. Rather than leave the auditorium peacefully, Dr. West, in his too tight pants, began shakin’ it fast. Donna Brazile, who reminded me of myself at that moment, got up and began dancing on his behind – not closely of course- while shaking a white handkerchief in the air. Roland Martin, an Alpha man, began doing steps. And of course, the audience, including me, began dancing in the aisles.  I felt the love. I felt the love. I felt the love. 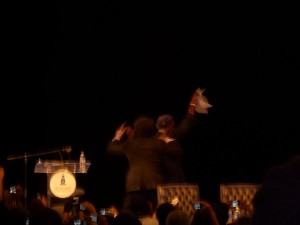 I like to think that Jesus Christ was a 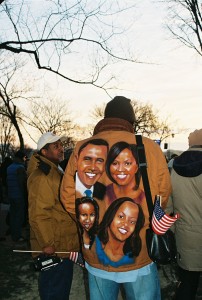 romantic too. After all, his first miracle was performed at a wedding. Hopefully, God will bless our union with President Obama. And so now it feels like we’re honeymooning…Although, I’ve never been married, I’ve been told that the honeymoon doesn’t last forever. At some point, real life sets in…but for right now, I’m just happy that Obama is “The One.”