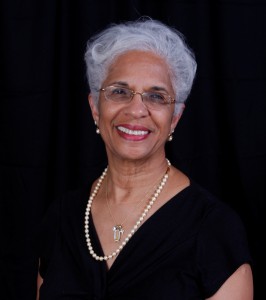 I wanted to end Women’s History Month by devoting today’s blog entry to an important woman in Atlanta history. That woman is Ms. Bunnie Jackson-Ransom, president and CEO of firstClass, Inc., a full-service public relations and marketing firm she founded in 1975. Her clients lengthy list of clients have included but are definitely not limited to: The National Conference of Black Mayors, Burger King Corporation, the Trumpet Awards,  The King Center, American Traffic Solutions, Jackmont Hospitality, Inc. and Edmond, Lindsay & Hoffler, LLC.

Ms. Jackson-Ransom has enjoyed a multifaceted career. While serving as president and owner of firstClass, she responded to a request to manage the careers of several performing artists; and from 1978 through 1988, she was the chief administrative officer of a conglomerate company under the umbrella of Atlanta Artists.   She began her career in the music industry after she had already distinguished herself as a business woman in the areas of education, government and public relations.  As president of Atlanta Artists Management, she was also responsible for the daily activities of Atlanta Artist Productions and Atlanta Artists Records, and managed the recording career of acts such as CAMEO and Larry Blackmon and The SOS Band.

Ms. Jackson-Ransom is a member of the National Council of Negro Women; Atlanta Association of Black Journalists; the Atlanta Branch of the NAACP; The Links, Inc.; the Metropolitan Atlanta Coalition of 100 Black Women.  She is also an active member of Delta Sigma Theta Sorority where she served as past local chapter president and past chairman of the National Projects Committee. In the early 1970’s she served the City of Atlanta as its first black “First Lady” during her marriage to the late Mayor Maynard Jackson before they divorced in 1976. She is the proud mother of three daughters and one son. More recently, she is the grandmother of five. She is an active member of Cascade United Methodist Church. To read her complete biography, please go to her Ms. Jackson-Ransom’s website. 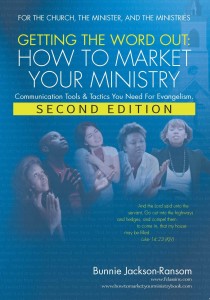 Ms. Jackson-Ransom is also the author of Getting The Word Out: How To Market Your Ministry: Communication Tools & Tactics You Need For Evangelism, which was originally published in 2010 but recently revised. Her book is the reason that I wanted to feature her on this blog.

1. Why did you write Getting the Word Out?

I wrote this book because I had been doing public relations for churches for a long time. It started with a project that I did for Apostle Collette Gumby and a church called Green Pastures. She was doing a play called “King of Glory,” and I got excited about the play. I was working for Burger King. Burger King was a client, and my job was community affairs for Burger King. So I presented the project to Burger King. They liked it, and they became a sponsor for the church’s play. As a result of my working with Rev. Gumby, I found myself doing things for the church, press releases about the church, getting interviews for the church about the play and so forth and put that in my bucket of things I had done so to speak.

So when I joined Cascade United Methodist Church, the pastor there was Rev. Walter Kimbrough. He put me to work on doing some things for him like handling the project for his retirement and before the retirement, his anniversary. And I kept on doing work for my church. There was a need for someone to do the things that I was doing for the church. I finally said to Rev. Kimbrough, ‘I’m treating you like a client. You have a spot in my computer. You have a folder in my files. How about considering retaining my services?’ And he did. So I worked for the church for at least five or six years before he retired.

What I discovered was that I had a plan in my head for handling marketing for churches. It wasn’t that much different from the way one goes about handling marketing for any other organization or corporation. You have a product. The product has to be pushed out into the marketplace for use. And so I said this is a book.

2. Why is getting the word out important for churches?

If nobody knows that you are there, nobody will come. God is a master marketer. The reason I say that is because of Matthew 2:2. We saw a star in the east and have come to worship Him. That star is a billboard that God put in the sky. If the wise men hadn’t seen it, they would not have come to worship the baby Jesus. God has been marketing Christianity, and Jesus was a marketing person. He rode in cities with palms. That is like a parade.

And look at Romans 10: 14 . How then shall they call on Him in whom they have not believed? And how shall they believe in Him of whom they have not heard? And how shall they hear without a preacher? This verse says to me, How can they do any of that if you don’t get the word out and compel them to come into God’s house. When you drive up and down Cascade Road, there are at least seven churches within a mile. What makes me go to church A and rather than church B? It’s marketing. It’s how you get the word out about your church.

3. I understand that you are also available to present your book as a workshop to churches.

Yes, several pastors have invited me to their churches. Pastor William Flippin of Greater Piney Grove Baptist Church in DeKalb County bought several copies of the book and gave them to his leadership team. He brought me in to do a session on the book, and then he took it a step further, he asked me to come back and do a session on crisis communications.  I just returned from a session in Little Rock, Arkansas with Pastor Ronnie Miller-Yow. He brought me in to do a seminar before several United Methodist churches from that district. I worked with Jeffries Cross Church in Burlington, North Carolina.

I have several plans that I offer churches. With one plan I just come in and do the seminar and another one, I do the seminar and help you start your communications committee. I leave the committee with job descriptions and help them develop a media database for the area that they are in, show them how to write a press release, or I can give the church the plan and come back in six months to see what you’ve done or you call me up and say, ‘Bunnie, I’ve written a press release, can you tweak it?’

4. Why did you revise the book?

It had holes in it. Social media happened. I didn’t give that much attention to it in the first book. I just mentioned it. Now I discuss about three or four platforms that would work for the church. And then I put in a chapter in it about crisis communications.

5. It seems that many churches are having crises. How should churches handle crises?

First of all, appoint a crisis committee. I mention the type of people who should be on that committee. If it’s a legal crisis, then you pull in your lawyer. But let’s say it is the kind of crisis that spills over into the media, you need to have a crisis go-to person. It doesn’t have to be the senior pastor, it could be the associate pastor. If you have a communications committee, it might be the chair of that committee. That is the person who calls the crisis team together.

Let’s say one of the deacons absconded with the collection plate. How do we fix this? We start talking to the congregation about the positive things that are going on in the church. If it’s in the media, talk about the positive the church is doing and give the media something else to talk about because if you don’t give the media something, they will do their job and report the story that they know about.

6. How did you get your start in public relations?

When Ernie Barnes asked for my help. He was the artist that did the paintings for J.J. on “Good Times.”  Ernie and I went to school together. I was married to the mayor and people would ask me to help them do things. So Ernie wanted to penetrate the Atlanta market and sell some paintings so I asked Ernie if he would do an exhibit and connect it to my (then) husband’s campaign to show that the Mayor Jackson campaign had a sensitivity for the arts.

So I went to the High Museum and asked if they would let us do something there with Ernie Barnes and the answer was no because they already had a schedule and we couldn’t fit in the schedule. So then I could found out that I could rent the lobby of the High Museum. So Ernie and I rented the lobby and we hung his paintings in the lobby. In the lobby, you could see his paintings on the way to Symphony Hall or going to the theatre or going anywhere there. We did a catalog of his paintings, and we hired someone to sit there. Well, Ernie sold out.

I took Ernie’s paintings to the president of the Coca-Cola Company who at that time was Paul Austin and asked if he would support the project and he did. Ernie did some paintings called the ‘The Beauty of the Ghetto.’ That was the exhibit was called and we donated prints to all of the boys and girls clubs in Atlanta. And we got Ernie on the front page of the Sunday section of the newspaper with some of his paintings. I asked Ernie how much would you have paid someone to do this. He said, ‘Oh about $5,000.’ And remember this was a long time ago. I said, ‘Okay, I’m not volunteering anymore.’ And that’s how I got started. That’s how I realized what I was doing had value.

When President Obama was first elected, I used to say to myself, ‘Lord, just let me get to her.’ I’ve spoken to her, but there was such a flurry of people that I couldn’t say what I wanted to say. What I wanted to way was, ‘Hang in there. This too shall pass.’ When I was First Lady, I wanted my own thing so to speak. And I get the same feeling about Michelle. I mean she’s a lawyer so she’s got to have an ego. She’s got to have a dream of her own. And being the First Lady for me and most likely for her meant that I had to put my goals on the back burner so I want to say, ‘Hang in there, Sister. In eight years, it will be over.”

To buy a copy of Ms. Jackson-Ransom’s book, please go click on the link: Getting the Word Out: How to Market Your Ministry.