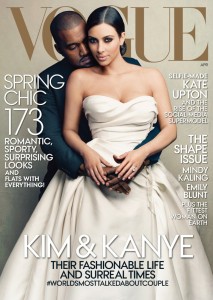 I’m proud to say that I have never watched a complete episode of “Keeping Up With The Kardashians” as I cannot stand to watch a family whose family values seem to essentially amount to opulent opportunism. And Kim’s New Age Valley Girl spin of the English language is also grating…And her current hubby Kanye ain’t been right since his mother passed away…At first it was understandable because grief can make you do some crazy things…But since then, he has deemed himself a “creative genius” and a “god” and most annoyingly Beyoncé’s  award show fairy godmother…whenever Bey doesn’t win an award he feels she should have won, he magically appears on stage and wreaks havoc…Obviously, he was at her beck and call when he most recently jumped on stage when Beck rather than Bey won the “Album of the Year” Award at this year’s GRAMMYs.

All that to say, the union of Kim and Kanye is bound to kause (cause) konundrums (conundrums) and is rife for ridicule for the rest of our lives or as long as they are married…Kimye’s most recent shenanigans took place in an Armenian church yesterday as the Kardashians are visiting their ancestral home in Armenia. Apparently, Kimye must have confused themselves with President Barack Obama and First Lady Michelle Obama as they attempted to shut the doors of Cathedral of the Holy Mother of God in the city of Gyumri to keep journalists and other nosy folk out of the church. But the local bishop, Mikayel Adjapagian, wasn’t trying to hear all that yang-yang as he did not want to obstruct worshippers from entering the church…This is a bishop that knows his Ten Commandments, namely the first one: You Shall Have No Other Gods Before Me…Obviously, I wasn’t there so I don’t know exactly how it went down because this how it happened in my crazy writer’s imagination:

Kimye arrives as the entrance of the beautiful Armenian church. Kim purses her lips ever just so and poses in hopes that the paparazzi will take flattering shots of her. Kanye affixes his I’m-too-cool-to-smile-but-I-hope-you’re-looking look as he walks behind her. After a few minutes of this, flanked and guided by big ole bodyguards and haughty handlers, Kimye and Northwest enter the church.

Kim: (stroking her beautiful raven hair like she is a modern-day Morticia Adams) Oh My Gaaawd (taking the Lord’s name in vain with a New Age Valley Girl Twist. Sacrilegious & Annoying… )Like I’m so annoyed…Kaaanye, we’ve got to stop the paps and those other people from coming in behind us…I only want the cameras for the show in here…I mean when we walk back out, I want them to be there of course, but not right nooow…

Kanye: Baby, your man is a God and this is my domain…As it is in my head, so it shall be done on earth…

Bishop Mikayel Adjapagian: Welcome Mr. & Mrs. West, we are honored that you are visiting today –

Kanye: (interrupting the bishop) I’mma let you finish, but we need to have the church doors closed immediately to keep the paps and those other people out of my house…Because I’m a god..

Bishop Mikayel Adjapagian: Your house? This is the house of God. You, sir, are a not a god, and I will not allow worshippers to be prevented from entering His house even for you, Mr. West…Furthermore, who told you you were a God?

Kanye: I just told who I thought I was. A god.

Bishop Mikayel Adjapagian: Excuse me? (At this point, baby Northwest, who has been whimpering all along, begins to wail!)

Kanye: I guess you don’t think Beyonce is the mother of God, either?

Later in an Armenian hotel, Kim recounts what happened with Khloé in her Khloé’s hotel room…

Khloé: Aren’t you used that? With Kanye?

Kim: I guess I should let go, and let God…the real God…

Kanye: (who is able to see what is happening in the next door hotel room because he is a god, shrugs)

Any thoughts? (Note: This is all a figment of my imagination…)