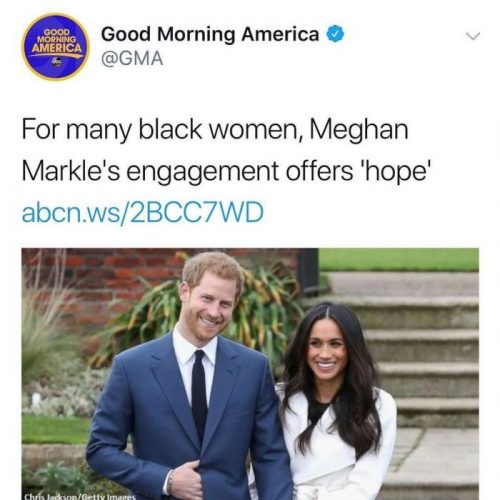 ABC News’ (courtesy of “Good Morning America” )recent article originally entitled  “For Many Black Women, Meghan Markle’s Engagement Offers ‘Hope’” posted last week had black women all up in their feelings last week! In fact, the article has even caused the author Joi-Marie McKenzie to get hate mail, according to thegrio.com!

A few of the reactions to the controversial headline:

The backlash is so fierce that ABC News changed the headline to “After Meghan Markle’s Engagement, Some Are Celebrating” with an editor’s note:

The story headline has been updated. The original headline misrepresented the intention of the story, which was to report on the excitement among some black women about Meghan Markle’s joining the British royal family.

But this isn’t the first time that black women have been all up in a tizzy and ready to rush ABC News! In fact, the last time I remember this type of backlash was December of 2009. Remember this article from ABC News: “Single, Black, Female — and Plenty of Company?” From the article, you already know what’s up and the worse part about the article was that black women in Atlanta, specifically, were the focus. At the time, I was a single, black female in Atlanta and so weary from looking for love that I really couldn’t collect my thoughts on what I thought was an attack until January.  Here is what I wrote on this blog:

I had composed what I thought was an eloquent, sociological diatribe of a post about the ABC “Nightline” piece that aired last month about black women, particularly those living in Atlanta, and their inability to find mates due to the shortage of black men…But since this is the Internet and in the interest of self-preservation, I thought better of it…

So I simply want to know what y’all think…take a look at the video if you haven’t seen it already, and let me know…

And here is the original video of the segment on which the article was based:

From this article came this dismal statistic:  “Forty-two percent of U.S. black women have never been married, double the number of white women who’ve never tied the knot.” In fact, this article and the statistics quoted in the article caused such a seismic shift that that the article was linked to in an article published just a few a months ago  “Black, Single, and Waiting: For 15 years, The Bachelor Franchise Has Made a Caricature of Blackness. Could This Season Finally Be different?” on slate.com.

While I was initially horrified that I and black women were written about like we truly are the “de mule uh de world” (a reference to how black women are viewed in one of my favorite books “Their Eyes Were Watching God” by Zora Neale Hurston), the report, article and subsequent debate Why Can’t a Successful Black Woman Find a Man?  held in Atlanta in April 2010 by ABC News in response to this article forced me to get real clear about what I wanted and needed in a husband and the fact that I wanted and needed a husband. And to be apologetic about it as well. It’s funny that two months after that report, I went on my very first date with my husband.

So when I saw all of this fervor online last week, it reminded me of how I once felt: victimized, a bit ashamed (if I am being completely honest) and unable to hide one of my deepest desires anymore. But those feelings led to one of the best decisions of my life. So the headline last week wasn’t the best, I’ll admit, but if you (and this is for single black women reading this post) find yourself ready to fight after reading the ABC News article, consider focusing inward instead of outward.

And if somewhere down deep the fact that Meghan Markle has found her Prince Charming (or he found her) has given you hope that your Prince Charming is somewhere out there, do what needs to be done (and only you can determine that) so that you are ready to meet him despite negative statistics. For me, it took kissing frogs, dating mentors, professional assistance, online dating, a slew of dating books, prayers and more, but my husband, perfect-for- me-with- all-of-his imperfections (I aine perfect either) Prince Charming, finally came along…