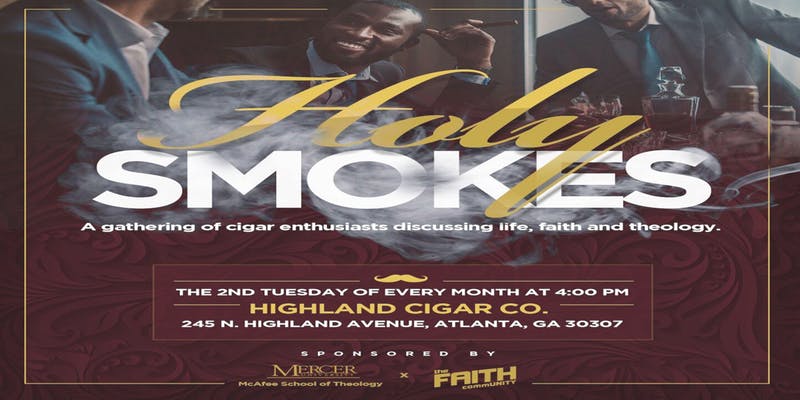 I once dated a man who was a cigar enthusiast, a cigar connoisseur actually. On one of our first dates, he took me to Highland Cigar Company in downtown Atlanta. I remember when he told me that is where he wanted to go, I was hesitant at first. At the time, I had long locs and I was in between hair appointments meaning that I wouldn’t be seeing my stylist for a while. This meant that I would be smelling like cigar smoke for some time even after our date. But as a curious journalist, I couldn’t let the opportunity to experience an environment that I hadn’t experienced before pass me by. So off we went.

As expected, everywhere I turned was shrouded in smoke. Richly colored walls and mahogany leather furniture made it seem like I had entered a lair. My date took out a personalized case of some sort (I think it’s called a humidor) in which he kept his cigars and accompanying materials. He introduced me to other gentlemen who also had these cases and they commenced to smoking. As I took in the scene, I thought I would be bothered by the smoke or just plain bored. But I found the experience to be quite enjoyable. Although there were some women smoking it up with the fellas (some of them had pink cases if I’m remembering correctly…I guess for the feminine touch), it was clearly a male-dominated space. I enjoyed the male energy which included loud trash talk bolstered by the sports that was broadcast on several television screens throughout the bar. Although the men were speaking to one another in aggressive tones, the camaraderie was as detectable the smoke from the cigars.  And what I liked best is that many of the men were well-dressed, and I’m not talking coordinated athletic gear. I’m talking wing-tipped shoes and pocket squares. It was as if smoking cigars was a part of a look.

Final assessment: Going to the Highland Cigar Company was worth smelling like smoke for days afterward. I remember when I told my mother that I was taken to a cigar bar as a date. She said it was unladylike and that she didn’t think a gentleman would take a lady there. I disagreed.

All that to say, when I saw this flyer for “Holy Smokes” last week, I recalled my experience at the Highland Cigar Company. Of all of the conversations that I eavesdropped on that night, I don’t recall hearing about “life, faith and theology.” And it got me thinking, should Christians frequent cigar bars? Correct me if I’m wrong but I haven’t seen the commandment, “Thou Shalt Not Smoke” in the Bible. Now in the Word, it does say that, “Do you not know that your bodies are temples of the Holy Spirit, who is in you, whom you have received from God? You are not your own; you were bought at a price. Therefore honor God with your bodies.” 1 Corinthians 6:19-20. And it’s clear that smoking is hazardous to your health. But there are many chemicals that Christians consume in various ways that are hazardous to our health. (I saw you heat up that frozen lasagna! Please tell what are the first three ingredients in that entree. If you cannot pronounce them or point to them in nature, they are likely hazardous to your health and not a testament to taking care of your temple…Just sayin’…) 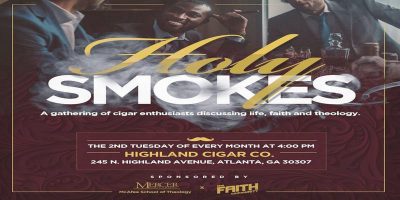 So this is how the event is described:

After the Independence Day firework smoke has cleared, we’ll meet to light up some smoke of our own. Celebrate a theological freedom and an independence of thought, of conversation, and of true community outside the four walls of traditionalism and church as you’ve always known it.

If a bourbon communion sounds like your kind of deal; if talking about politics and faith and everything in between resonates with you; or if you even just need another excuse to spend some time kicking back at a cigar lounge — this event is for you.

The Faith Community started as a small group of seven people in an apartment in 2015. The goal of the small group was to provide people with an intimate space to wrestle with our faith and mature as Christians in community. We did this through dialogue, reflection, activities and food. The intent was never to start a church, but that is what we became. The Faith Community is our attempt to make available to the public the meaningful experiences that we have shared in private. We are working to follow the example of Jesus by extending Limitless Love and creating Boundless Connections.

So what do you think?