By now, you may have heard that hometown hero (my hometown of the A that is) Tyler Perry gave away some 5,000 free meals on Sunday. Below is the story from PEOPLE magazine:

On Sunday, the star opened up his Atlanta movie studio, Tyler Perry Studios, for four hours to feed 5,000 families with a combination of food boxes and gift cards for local supermarket chain Kroger.

Perry, 51, personally funded the event, called TPS Giving, and studio employees donated their time to volunteer and hand out all of the goods.

“Tyler was heartbroken seeing people all over the country stand in line for food so he decided he wanted to give back to his community in Atlanta,” a source close to Perry tells PEOPLE. “Hopefully this encourages others who are able to, to give back during the holiday season in a year that has been difficult for many.”

I’m always amazed by Tyler Perry’s generosity, but what drew my attention to this story more than his good deed was that so many people are in need AND what they were willing to do to be blessed by him. Apparently, several people showed up as his studio hours before the event started. Obviously, times are really hard for people right now.

But he is not the only one who is in the giving mood here in the A! Earlier today, Atlanta entrepreneurs Jason Lobdell,  Alix Burton, Marcus Barney, Neo Davis and Jonathan Gooch took over the registers at a local Kroger store and paid for roughly $40,000 in groceries! Below is the story from 11 Alive: 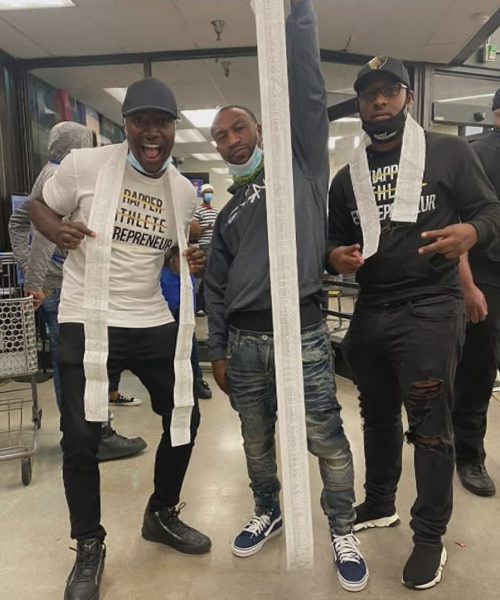 Customers at one metro Atlanta Kroger had a surprise gift in store when they arrived at the checkout counters.

“One hundred and seventy eight dollars in groceries,” said one customer on cell phone video.

“We had women literally crying saying thank you so we know how much it means,” Jason Lobdell said.

That was just some of the reaction customers gave after receiving free groceries. A band of entrepreneur brothers decided to bless as many people as they could at the Kroger on Wesley Chapel in Decatur. His friends, Alix Burton, Marcus Barney, Neo Davis and Jonathan Gooch went on Instagram live saying, “We’re doing a full shutdown we’re spending about 30 grand to take care of the entire market.”

Jason Lobdell said at first they were going to hand out gift cards but that was taking too long so they went with plan b. Read the rest HERE.

As outstanding as these acts of generosity are, you don’t have to be wealthy to give some of what you have away. You and I may not able to give free meals to 5,000 people or take over the registers at a local grocery store for a couple of hours, but God can still use to bless somebody in some way…