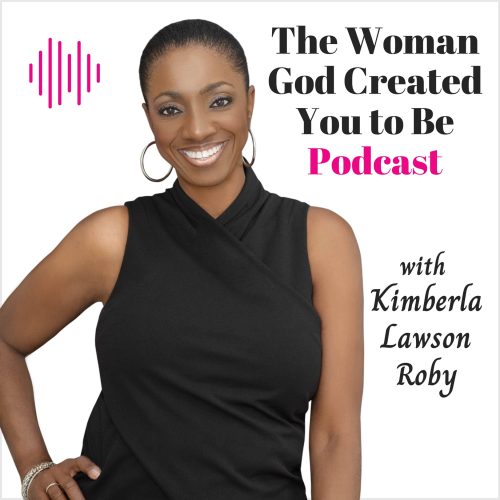 In January, fiction dynamo Kimberla Lawson Roby, a New York Times bestselling author known for her Reverend Curtis Black Series, released her very first nonfiction title The Woman God Created You to Be: Finding Success Through Faith — Spiritually, Personally, and Professionally! Now, Kimberla is launching a podcast based on that book entitled The Woman God Created You to Be Podcast, which will start tomorrow!

Below is the description including a trailer:

Are you the real woman God created you to be? Do you want to become her? Join New York Times bestselling author and speaker, Kimberla Lawson Roby, each week, as she inspires and encourages you to become the best you can be in all areas of your life—spiritually, personally, and professionally. In every episode, Kimberla will transparently discuss topics, such as faith, purpose, relationships, self-care, women’s issues, fear, failure, success, and so much more—all of which she has struggled with or experienced herself. Additionally, she will share three things you can do, as well as a scripture to help you. Kimberla is a Christian woman, wife, bonus mom, speaker, and author of 28 books, including, The Woman God Created You to Be: Finding Success Through Faith — Spiritually, Personally, and Professionally.

Each Monday, you’ll be able to listen to a new episode via Apple Podcasts, Google Podcasts, Spotify, iHeartRadio, Stitcher, or Amazon Music. Also, so you don’t miss any of the weekly episodes, subscribe to the podcast at no cost to you.

If you haven’t read her book The Woman God Created You to Be: Finding Success Through Faith — Spiritually, Personally, and Professionally , I interviewed her about this book earlier this year. A portion of that interview is below.

1. In your latest title The Woman God Created You to Be, your first nonfiction title, you reveal so much. You reveal that you wrote your last seven fictional stories “in misery,”  that you didn’t meet your biological father until you were an adult, that you were touched inappropriately as a child, that you’ve been married before and more. Why reveal all of this now after cultivating a career in writing in which you have kept your personal life to yourself?

That is a very, very good question, even one that I sort of had for myself, and the only answer that I have is what the truth is: This is not necessarily the book that I wanted to write. But it is a book that God laid on my heart, and one that just wouldn’t go away. First of all, the idea of just writing a nonfiction book, and also the idea of writing a book in which I am so transparent. But as I continued to pray about it and move forward with it, I decided, ‘Okay, yes, Lord, I hear you, and I am going to write this book.’ Especially if it is going to help women. I also had to come to the understanding that the only way I was going to do that was to share my own experiences whether they were the successes and the accomplishments that God has allowed me to have, as well as the fears, the flaws, and the failures.

2. You said you wrote your Rev. Curtis Black Series so that readers would pay close attention to who their church leaders are. Do you feel you accomplished this goal?

I do. From when the very first title in the series ‘Casting the First Stone’ was released in January 2000, I’ve heard many, many stories from readers in cities and states throughout the country. So many people have said to me, ‘It made me take a look at my pastor. It made me take a look at my church leader.’ I heard them say that it wasn’t something they’d thought to do, and that it really made a difference in their lives, so that was my whole point. I also mentioned in the book that I love God too much to have written that particular series to criticize or ridicule the church or pastors. I would never do that, and my hope was that people would come to realize that it’s not about worshiping another human being who is standing in the pulpit, but it is absolutely about making sure your own personal relationship with God is intact.

No one is perfect, but what do you feel that people should look for in a church leader, particularly for those who are sour on church as you mentioned in your Church People chapter?

I think people should certainly look for a leader who is following God and then also one who has great integrity. I speak very highly of my own pastor because those were two of the things that Will [her husband] and I looked for when we began looking for a different church several years ago. And that makes all the difference – looking for a pastor who not only does what he says he is going to do but that you can see that he is doing it. And you can feel that he cares, not just about himself but that he cares about people in general.

3. In your chapter The Comparison Game and Pretending to Be Someone You’re Not, you write about writers who have often said they want to be like you with a wonderfully successful writing career without realizing that if that were true, they would have to be like all of you – which includes still grieving the loss of your mother after she passed away 18 years ago and having anxiety attacks. Why do you feel that this is an important message for writers?

I think that it’s a very important message because especially in this day of social media, so many times, people are scrolling through timelines and they’re looking at the next person, thinking, ‘Wow, I wish I could trade places with them,’ or ‘Wow, there’s no sense in me following through with the purpose that I know God has given me because someone else is already doing it.’ That’s what I believe really gets us in trouble. The best advice I could give to anyone, and this is across the board, is to just be who God created you to be. Focus on what your own passions are. Pray and ask God to show you what your purpose is so that you can begin walking in it. One of my lines that I like to say is, and it’s not brand new, but I really believe in staying in my own lane. I just suggest that everyone do that.

And for some writers, you are a New York Times bestselling author, but for some authors, their writing path may not include that kind of accolade. What do you say to that?

My thoughts have always been to focus on what God created you to do. Maybe He has brought you into this world to bless 20 people versus 20,000 or 20 million. But we have to be okay with that. We have to do what God has assigned to our lives.

I will definitely be listening tomorrow! How about you?