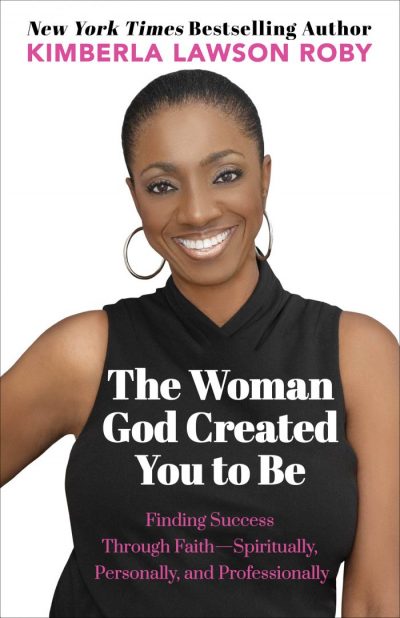 With the emergence of COVID-19, Women’s History Month has gotten lost in the shuffle of navigating this pandemic. But nevertheless, I wanted to end Women History’s Month on a positive note. Kimberla Lawson Roby is making history in her writing career as she penned her first nonfiction title The Woman God Created You to Be: Finding Success Through Faith — Spiritually, Personally, and Professionally after penning 27 fiction titles! She has sold nearly 3 Million copies of her books, and they have frequented numerous bestseller lists, including The New York Times, USA Today, The Washington Post, Publishers Weekly, Essence, Upscale, Black Christian News, AALBC.com, Barnes and Noble, Amazon.com, Wal-Mart, The Dallas Morning News, The Austin Chronicle and many others.

Below is the synopsis for The Woman God Created You to Be followed by my interview.

ARE YOU THE REAL WOMAN GOD CREATED YOU TO BE? HAVE YOU WANTED TO BECOME HER—SPIRITUALLY, PERSONALLY, and PROFESSIONALLY?

Kimberla Lawson Roby admits that for years, she wasn’t being the real woman God created her to be. Yes, she has always loved God and tried her best to honor Him, but what she eventually discovered was that building and maintaining her own personal relationship with God—and making Him her top priority—was the key to finding joy in all areas of her life.

Now, in The Woman God Created You to Be, Kimberla has bravely—and transparently—written about her flaws, fears, and failures, as well as her faith, courage, and successes. From experiencing divorce to marrying her soulmate of twenty-nine years…from hopelessly searching for the perfect job to becoming a New York Times bestselling author…from suffering in silence with anxiety to concentrating on self-care…from struggling with the loss of her mom to finding strength, comfort, peace. and understanding—Kimberla takes you on a journey that will help you do the following:

● Become the Best Spiritual You (Seven Days Per Week)

● Become the Best Personal You (Mentally, Emotionally, and Physically)

● Become the Best Professional You (Without Jeopardizing Your Faith)

Kimberla reminds us that when we trust and depend on God—heart, mind, and soul—He will empower us to do more than we ever thought imaginable. He will help us see that we are more than enough, and that He has already given us everything we need to become the women He created us to be—spiritually, personally, professionally…and beyond.

1. In your latest title “The Woman God Created You to Be,” your first nonfiction title, you reveal so much. You reveal that you wrote your last seven fictional stories “in misery,”  that you didn’t meet your biological father until you were an adult, that you were touched inappropriately as a child, that you’ve been married before and more. Why reveal all of this now after cultivating a career in writing in which you have kept your personal life to yourself?

That is a very, very good question, even one that I sort of had for myself, and the only answer that I have is what the truth is: This is not necessarily the book that I wanted to write. But it is a book that God laid on my heart, and one that just wouldn’t go away. First of all, the idea of just writing a nonfiction book, and also the idea of writing a book in which I am so transparent. But as I continued to pray about it and move forward with it, I decided, ‘Okay, yes, Lord, I hear you, and I am going to write this book.’ Especially if it is going to help women. I also had to come to the understanding that the only way I was going to do that was to share my own experiences whether they were the successes and the accomplishments that God has allowed me to have, as well as the fears, the flaws, and the failures.

2. You said you wrote your Rev. Curtis Black Series so that readers would pay close attention to who their church leaders are. Do you feel you accomplished this goal?

I do. From when the very first title in the series ‘Casting the First Stone’ was released in January 2000, I’ve heard many, many stories from readers in cities and states throughout the country. So many people have said to me, ‘It made me take a look at my pastor. It made me take a look at my church leader.’ I heard them say that it wasn’t something they’d thought to do, and that it really made a difference in their lives, so that was my whole point. I also mentioned in the book that I love God too much to have written that particular series to criticize or ridicule the church or pastors. I would never do that, and my hope was that people would come to realize that it’s not about worshiping another human being who is standing in the pulpit, but it is absolutely about making sure your own personal relationship with God is intact.

No one is perfect, but what do you feel that people should look for in a church leader, particularly for those who are sour on church as you mentioned in your Church People chapter?

I think people should certainly look for a leader who is following God and then also one who has great integrity. I speak very highly of my own pastor because those were two of the things that Will [her husband] and I looked for when we began looking for a different church several years ago. And that makes all the difference – looking for a pastor who not only does what he says he is going to do but that you can see that he is doing it. And you can feel that he cares, not just about himself but that he cares about people in general.

3. In your chapter The Comparison Game and Pretending to Be Someone You’re Not, you write about writers who have often said they want to be like you with a wonderfully successful writing career without realizing that if that were true, they would have to be like all of you – which includes still grieving the loss of your mother after she passed away 18 years ago and having anxiety attacks. Why do you feel that this is an important message for writers?

I think that it’s a very important message because especially in this day of social media, so many times, people are scrolling through timelines and they’re looking at the next person, thinking, ‘Wow, I wish I could trade places with them,’ or ‘Wow, there’s no sense in me following through with the purpose that I know God has given me because someone else is already doing it.’ That’s what I believe really gets us in trouble. The best advice I could give to anyone, and this is across the board, is to just be who God created you to be. Focus on what your own passions are. Pray and ask God to show you what your purpose is so that you can begin walking in it. One of my lines that I like to say is, and it’s not brand new, but I really believe in staying in my own lane. I just suggest that everyone do that.

And for some writers, you are a New York Times bestselling author, but for some authors, their writing path may not include that kind of accolade. What do you say to that?

My thoughts have always been to focus on what God created you to do. Maybe He has brought you into this world to bless 20 people versus 20,000 or 20 million. But we have to be okay with that. We have to do what God has assigned to our lives.

4. In your chapter Friends, Friendly Enemies and the Mean Girl Syndrome, you wrote about some female authors who shunned you while male authors were kind to you. Why do you feel that women tend to be like that, and how did you eventually find female authors whom you could trust?

I really don’t have an answer for that. That’s something that I would love for someone to tell me and explain to me why that happens. Why do you come across some women who just can’t be happy for you if you’re doing just a little bit better than they believe they are? And with men, it’s something totally, totally different. I really don’t have an answer for that. I can only tell you my response to it, and that was to totally walk away from everybody at that time. And then as time went on, I eventually met new authors, and I became a lot more careful. And then when months and years started to pass, and I saw they really had not changed, that they were genuine, and that they cared about me as much as I cared about them, I just discovered who those people were.

I had to take things step-by-step. I, honestly, till this day, I really don’t have another author, other than the two authors who I mentioned in the book, who really stepped up and said, ‘This is what you should do next,’ ‘This is what you should be doing,’ or ‘Great job! Keep doing that!’ And those authors are E. Lynn Harris and Eric Jerome Dickey. Those were the two, at the very beginning, who I learned so much from during those first couple of years of my career.

5. In your chapter Everyone has a Soulmate –  Even if She Hasn’t Met Him Yet, which is a controversial title, you reveal that you believe that every woman has a soulmate. Why do you believe that?

I do. I believe it, I think, because of my experience with Will and being married before and ultimately meeting Will and just knowing, “Oh my gosh, this is a connection that I’ve never experienced in my life even throughout my years of dating.” Will and I came together, and I don’t want to say how because I don’t want to give so much away from the book. But I just believe that everyone has a soulmate. My controversial statement in that chapter is ‘even if you’re married to someone else’ that’s not your soulmate, you still have a soulmate out there.

And you also advise women to not just be looking for a doctor, attorney or corporate executive but also  to be on the lookout for the man who delivers your mail, works for the electric company or  works at a fast food restaurant. Do you feel that is an issue for women in their search for love?

There are many more questions that I could have asked of Kimberla regarding her book The Woman God Created You to Be: Finding Success Through Faith — Spiritually, Personally, and Professionally, but I don’t want to reveal it all. Hopefully, I’ve given you enough for you to want to pick up your own copy which you can HERE!

Kimberla resides in Illinois with her husband, Will.

For more information about Kimberla, please visit her website: kimroby.com.