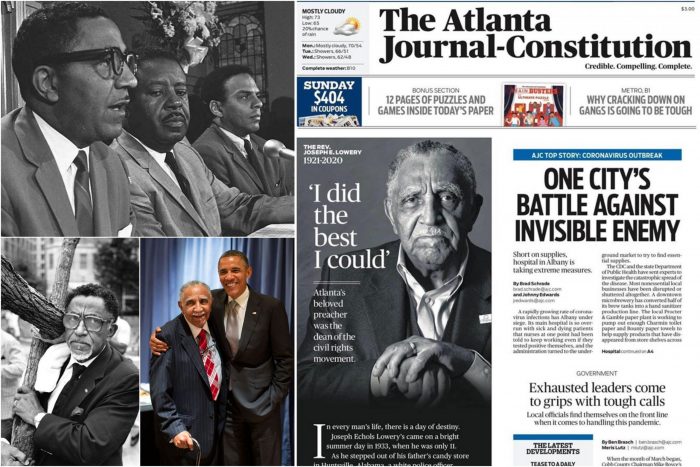 Our beloved, Rev. Dr. Joseph Echols Lowery, made his transition peacefully at home at 10 p.m., Friday, March 27, at the age of 98. He was surrounded by his daughters.

Hailed as the “Dean of the Civil Rights Movement” upon his receipt of the NAACP’s Lifetime Achievement Award, Dr. Lowery had assumed and executed a broad and diverse series of roles over the span of his nine decades: leader, pastor, servant, father, husband, freedom fighter and advocate.

Born in Huntsville, Ala., on October 6, 1921, his legacy of service and struggle was long and rich. His genesis as a civil rights advocate dates to the early 1950s, when he headed the Alabama Civic Affairs Association, which led the movement to desegregate buses and public accommodations. In 1957, with friend and colleague Dr. Martin Luther King Jr., he was a co-founder of the Southern Christian Leadership Conference (SCLC).

He served as Vice President (1957-1967), Chairman of the Board (1967-1977), and as President and Chief Executive Officer (1977-1998). To continue his legacy and promote non-violent advocacy among future generations, The Joseph E. Lowery Institute for Justice & Human Rights was founded in 2002 at Clark Atlanta University. The Institute was later renamed to include and honor Dr. Evelyn Lowery, his beloved partner in marriage and the movement for 67 years.

Calling on his over 40 years as ‘pastor’ and in his inimitable style, Dr. Lowery delivered the benediction on the occasion of President Barack Obama’s inauguration as the 44th President of the United States in 2009. Later that year, President Obama awarded him the nation’s highest civilian honor, The Presidential Medal of Freedom, in recognition of his lifelong commitment to the nonviolent struggle for the causes of justice, human rights, economic equality, voting rights, peace and human dignity.

Our entire family is humbled and blessed by the overwhelming outpouring of love and support that has come from around the globe. We thank you for loving our father, Dr. Joseph E. Lowery, and for your continuous prayers during this time. However, the family will not be conducting interviews during this grieving period.

In lieu of flowers, cards or food, donations may be made to The Joseph & Evelyn Lowery Institute for Justice & Human Rights. Dr. Lowery’s life was driven by a sense of obligation to our global community and desire to champion love over hate; inclusion over exclusion. The Lowery Institute was founded in 2002 to further Dr. Lowery’s legacy of promoting non-violent advocacy among future generations.

Aligning with the Centers for Disease Control and Prevention’s guidelines on COVID-19 prevention and social distancing, plans are underway for a private family service. A public memorial will be held in late summer or early fall.