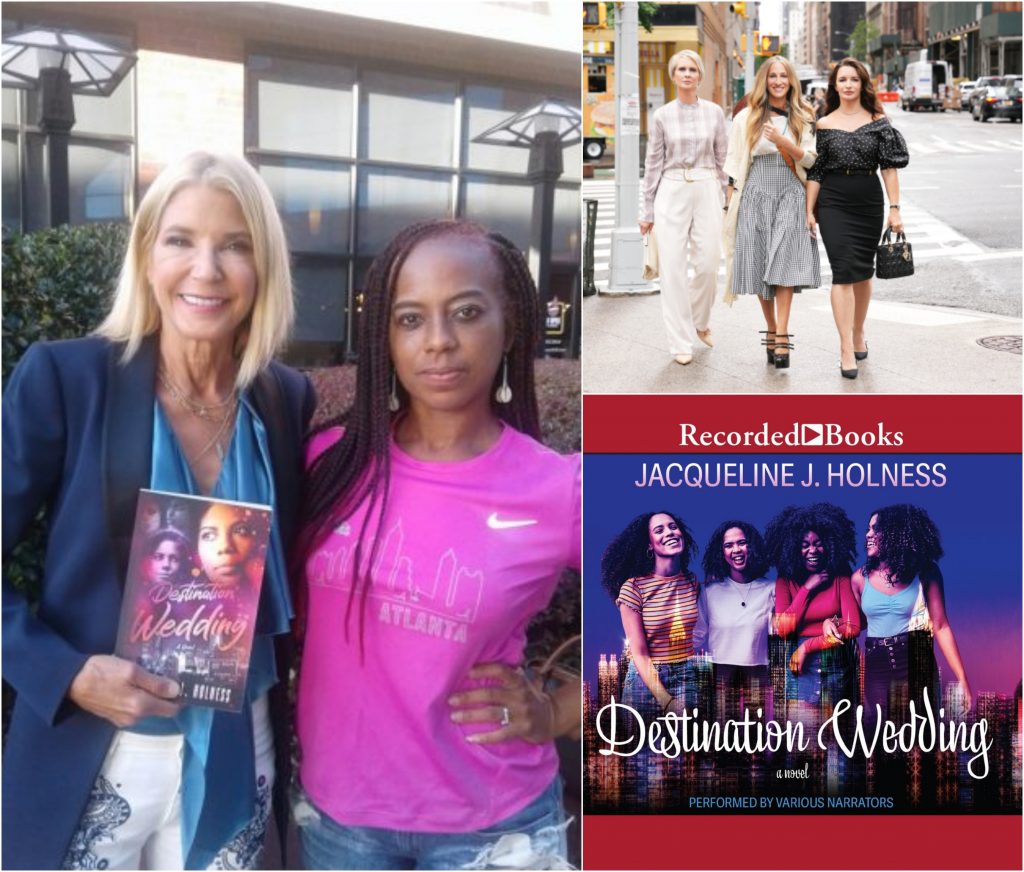 Me and Candace Bushnell with the print edition of my book, the first look photo for ‘And Just Like That’ & the Recorded Books audiobook version of “Destination Wedding”

I cannot claim to be unequivocally “Sex and the City’s” biggest fan, but I have to be in at least in the top five of “Sex and the City’s” biggest black fans. I mean I don’t know of any other black woman or person who wrote a whole novel because he or she was inspired by the show and tracked down Candace Bushnell, whose life was the inspiration for the hit HBO show, for an endorsement of said novel. (Other reasons I have to be in the Top 5: 1. I’ve watched every episode of all six seasons at least three times and seen and own both movies. 2. I have the “Sex and the City” trivia game. 3. I went on the “Sex and the City” tour in NYC  in 2006 and gleefully took a picture on Carrie’s stoop. 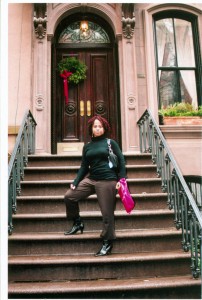 All of that to say, I have an informed opinion about Why I’m Looking Forward to the ‘Sex and the City’ Reboot ‘And Just Like That…’ Despite Samantha’s Disappearance, Carrie’s ‘Big’ Divorce and Diverse Characters Sprinkled In…Although I was shocked when I saw Sarah Jessica Parker’s January Instagram post which featured the trademark NYC bustle, a cacophony of blinking lights, car horns and bodies in motion, underneath Carrie’s familiar narration accompanied by her computer keyboard clicking, I literally tingled at the news that the next chapter of SATC would be told.

But I wondered what else could be told since the last time we saw Carrie, Charlotte, Miranda and Samantha, they were satisfied with who they ended up with (in Samantha’s case no one…which may have been a forecast of what was to come looking back…) and what they had achieved. I won’t go into all of the details here, but you can certainly look them up. But as we have learned since then, as Sarah Jessica Parker and Kim Cattrall are not really friends in real life to say the absolute least, their less-than-friendly relationship has led to Kim Cattrall taking Samantha with her. Samantha’s chapter as far as the show is concerned is complete. And just like that, SATC the next chapter became unwatchable for some people without Samantha. And I must admit that without Samantha adding her bawdy commentary to the girls’ banter, I wonder if the girls will be too tame. But there are three other lives that I’ve wondered about since Abu Dhabi so I will have to wait and see what’s up although I’m preparing myself to be let down at least somewhat…just in case…

At one point, I had read rumors that Mr. Big was not included either, and I was really taken aback by that. No Samantha? And then no Carrie and Mr. Big on top of that? What’s left? I love Miranda and Steve and Charlotte and Harry, but we all know that the Carrie and Big saga was the main thrust of the show season after season. Apparently, a leaked script reported by Page Six revealed that Carrie and Mr. Big are going through a divorce in “And Just Like That.” I’m sad to learn this news, but I’m not surprised by it. In Candace Bushnell’s “Sex and the City,” Mr. Big wanted a girl who was “someone normal.” Carrie was a lot of things, but “someone normal,” she was not. And although I appreciated the mystique of Big, if Carrie and Big had been real people, she would have married Aidan who didn’t mind that she couldn’t be tamed if she married at all. Because the fact is that both Carrie and Big are commitment-phobes which is why just the thought of marrying Aidan made Carrie break out in hives (Remember when she tried on that wedding dress?). And speaking of Aidan, he will be in the reboot in addition to Steve and Harry! So I’m at least looking forward to that…

And then there’s the chatter about the four diverse characters that have been added:

As a super fan who happens to be black, I certainly appreciate the added diversity, but it has to make sense in the story. Diversity just for diversity’s sake in a story is just dumb. I remember after watching the first 2008 “Sex and the City” movie, which included “Louise” portrayed by Jennifer Hudson, with my girls, we were not just happy to see a black woman included in our beloved show. This was my final assessment that I wrote in 2009:  I watched the movie in its entirety again on Saturday. And as I watched the movie again (I’ve probably seen it 3 or 4 times now), I was reminded of the one criticism of the movie that all of my girls agreed on – Jennifer Hudson’s character “Louise.” I heard that in an effort to appeal to the black fan base of the show, the movie writers decided to inject a black character. But my friends thought that with her use of Ebonics and her penchant for renting not buying designer purses, Louise was more of an insult instead of a compliment to black fans. As I watched the movie again, I didn’t necessarily think her character was offensive, but her character did seem to bit contrived.

I don’t want to see stereotypical characterizations of women of color. Just as there are many ways to be white women in this world, there are equally as many ways to be women of color. Based on the description of these diverse characters in the reboot, these women seem highly accomplished, but hopefully they will have flaws (necessary for real characters) which is what we love about Carrie, Charlotte and Miranda (and Samantha too 🙁 .) Their professional lives were admirable, but their personal lives are what kept us watching…And I look forward to watching SATC the next chapter although we will have to wait until the release date is announced…

And just like that, I’ve come to the end of what I have to say…What say you?