(Editor’s Note: I originally wrote this post back in August, but I thought I would repost today on Dr. King’s birthday and on the eve of Dr. Martin Luther King Jr. holiday…Enjoy!)

As if you did not know, today marks the 48th anniversary of the March on Washington and Dr. King’s delivery of his magnificent “I Have a Dream” speech in our nation’s capital. Today is also the day that the Martin Luther King Jr. National Memorial, which is located on the national Mall, was to be officially dedicated in front of thousands of people. However, due to the emergence of Hurricane Irene, the official dedication has been postponed to September or October, according to various new reports. 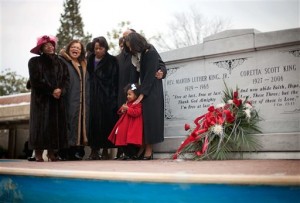 Dr. Alveda King, center, next to her cousin Bernice King and other members of the King family.

I was able to interview Dr. Alveda King, niece of Dr. King and daughter of his King’s younger brother Rev. A.D. King, about her uncle, his dream and other issues…

On the dedication of the memorial:

I think it’s wonderful to remember my uncle. With me being a preacher, I’ll be giving honor to God for blessing us with the gift that He gave to us through my uncle Martin Luther King Jr.

Her favorite memory of her uncle:

My favorite memory of my Uncle Martin were the times that our families were together. My father Rev. A.D. King is his brother. He and Dr. King live together in the kingdom of God now. They are in heaven together. But our families during their lifetimes were together very often – Christmas, Thanksgiving, summer, swimming, just fun. I remember we were at our Uncle Martin’s home one year. Daddy was playing the violin. And Uncle Martin was talking and laughing. We called him Uncle M.L. actually because my Dad was A.D. Alfred Daniel Williams King and Martin is Martin Luther King Jr. So they were laughing, and I was a young teenager, and I walked through, and I remember my uncle laughed and said, “A.D., you gonna have to watch it because the boys are going to be after her. She is gonna be a very pretty lady.” It affirmed me and made me so happy.

On the realization of Dr. King’s dream:

I believe that the world will remember and should remember Dr. Martin Luther King Jr. I think the most important thing for everyone to remember is that he loved God and he loved his family. And he was very much loved by us. I think I noticed in “USA TODAY,” there’s an article and it says with M.L.K. memorial opening, the dream has come true. Dr. King’s dream was really that we would all have the love of God in our hearts toward each other. The main part about his dream was advancing the kingdom of God and the love of God. And I do see that increasing in the world, and I think that’s true.

And I ask people as the dream is realized, has the “check for insufficient funds,” have those funds been made good? We are still struggling with the economy and many social issues, but I believe as we learn to love each other as brothers and not perish as fools, as my uncle said, we all have to learn to live together as brothers and sisters, I might add, or perish as fools. So as we move closer to that agape love, that God of kind of love, I believe that we will all overcome.

On the redemptive power of Jesus Christ, particularly for young people:

I like to remind people that David in the Bible pleased God in all things except the matter of Uriah the Hittite, and we know that he committed adultery and killed Bathsheba’s husband. Paul used to kill Christians. Mary Magdalene was the woman caught in the act. But the redemptive power of Christ. I want young people especially to realize this, when you stumble, get up. And then as you mature in Christ, you don’t stumble as much. None of us are perfect, but God is perfect. The blood of Jesus, the perfecting blood of Jesus His son can help us, can cleanse us, and then the power of the Holy Spirit.

So these are things that my uncle understood, my father Rev. A.D. King understood, my grandfather Daddy King. I’m understanding it more and more every day as I continue to mature so these are principles that young people and mature people can embrace.

And like I say, if you make a mistake just get up and keep going. If you can remember the days that when you were learning to ride a bicycle, when you fell off, you didn’t quit riding your bike. You got back on. When you were on the skating rink, if you fell over, you got up and kept skating. If you were at the bowling alley, if the ball went in the gutter, the next time you took it and you made a spare and found your strike. So these are the ways that we advance in life in Christ. And I do want to encourage all young people to live accordingly.

Dr. Alveda King is a civil rights and pro-life activist and founder of King for America Inc. which endeavors to “to assist people in enriching their lives spiritually, personally, mentally and economically.”

Dr. King also made an official statement regarding the dedication of Dr. King memorial…