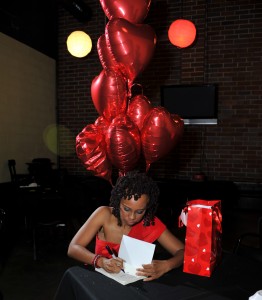 The lone writer...(get it? LOVE.THIS.PHOTO)...A pic from my book release party...

If you have visited my humble blog before, you know that my book which has the same name was released in February of this year! And since then, I have been on the move around the A as I have attempted to spread the word about a book that I truly believe will help women to develop a personal relationship with God! And God has blessed my efforts!

As of this month, my book is now available via Black Expressions Book Club! From the web site…

If you are a member of Black Expressions, you can order my book for a whopping 50 cents! Truly, you cannot beat that deal anywhere sooo order it here (click on the link.).

And now that the unofficial start of summer is this weekend (Memorial Day weekend), I plan to venture out of the A and hopefully spread the good news about After the Altar Call!

This weekend I will be at the 33rd Annual Christian Women’s Retreat in the Country Music Capital of the World! Yes, that’s right, I (along with my mother and other women from our church) will be traveling up the road a piece to Nashville to fellowship with Christian women from around the country. And if you’re read my book, one the original organizers of the retreat (which was created in 1980), Ms. Susie Doswell is featured in my book. Ms. Doswell has a tremendous testimony of thriving after after teenage pregnancy and abusive marriages. The convention will be held at the Sheraton Music City Hotel so if you’re in the area, stop by and see me.

And a few days after that, I will be signing my book on Tuesday, June 5 at 1 p.m. and Wednesday, June 6 at 2 p.m. at the Urban Ministries Inc. bookstore  at the Hampton University Ministers’ Conference in Hampton, Virginia! From the conference web site…

The Ministers’ Conference began in 1914 when the Negro Organizational Society, the Conference for Education in the South, the Southern Education Board, and the Cooperative Education Board sought to address the growing concerns of the African-American church and its relationship to the community. With Hampton Institute carrying strong influence with each of these community organizations, it became the birth-place of the original Ministers’ Conference, then known as The Conference of Negro Ministers of Tidewater, Va.

The HU Ministers’ Conference and Choir Directors’ and Organists’ Guild has also welcomed famous individuals to the campus of Hampton University. Past attendees have included the Rev. Dr. Martin Luther King, Jr. in 1962; the Rev. Wyatt Tee Walker of Abyssinian Baptist Church in New York; the Rev. Jesse Jackson; the Rev. Al Sharpton; the Rev. T.D. Jakes; and in 2007, Barack Obama.

I pray this book will truly help women all around the world develop a personal relationship with God! And I’m thankful to God for enabling me to spread the word about this book, and I could use your help too…Let erebody know After the Altar Call is on the move…

2 thoughts on “After the Altar Call on the Move…”