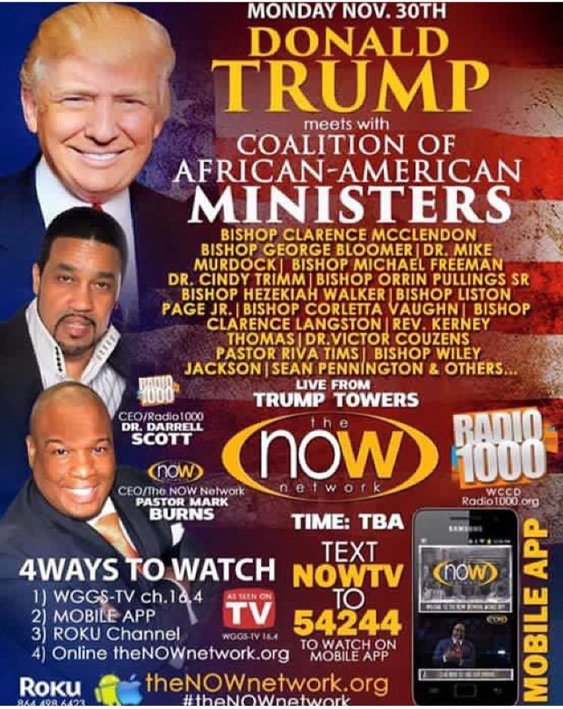 The honest truth is that I’m in political mourning right now as in just over a year our nation’s first black president will have to pass the mantle to another president. That being said, I haven’t really been paying attention to the wooing efforts of Hilary Clinton, Bernie Sanders, Donald Trump, Ben Carson, etc. I know who they are, and I’ve seen some of the headlines, but I’ve been too busy holding political shiva, if you will, to care…

But when I heard last week that the Donald had secured the endorsement of 100 black pastors and that they were going to meet at the Trump Tower for a telecast press conference on Monday, I realized attention must be paid…Thankfully, “more than 100 black religious leaders and scholars” trumped Trump and disseminated an open letter via one of the nation’s oldest black magazines, EBONY magazine, criticizing this purported unholy alliance…Below are last two paragraphs of the letter, which was signed “for the cause of justice.”

By siding with a presidential candidate whose rhetoric pathologizes Black people, what message are you sending to the world about the Black lives in and outside of your congregations?  Which Black lives do you claim to be liberating?

To stand with Jesus is to have great skepticism about systems of power and a willingness to question the motives of the powerful. Or, as James Baldwin once penned to Angela Davis: “If we know, and do nothing, we are worse than the murderers hired in our name. If we know, then we must fight for your life as though it were our own—which it is—and render impassable with our bodies the corridor to the gas chamber. For, if they take you in the morning, they will be coming for us that night. Therefore: peace.”’

Once the seemingly political Goliath started to be hit by a few of the Black Church’s stones including many pastors who said taking a meeting with the Donald was not synonymous with an endorsement, Trump backed up and said rather than his scheduled political preening to show off his breaking bread with black pastors, he would instead have “an informational meet and greet with many members of the Coalition of African American Ministers,” that it would not be “a press event, but a private meeting, after which, a number of attendees are expected to endorse Mr. Trump’s campaign for President,” according to rawstory.com.

So on Monday in the Promised Land (let some black pastors tell it) of the Trump Tower, more than 100 met with the Donald and afterward, he reported that he “saw love in that room” and that he anticipated “many, many endorsements” to be secured. One pastor who was there already voiced his endorsement, according to CNN.

“You want stories, you want controversy. Anybody who knows Donald Trump personally knows that he’s not a racist,” said Steve Parson, a black pastor from Richmond, Virginia. Parson said he was in “total support” of Trump.

But Pastor Jamal Bryant, who got criticized for saying “these h*** ain’t loyal” in one of his sermons, rightly divided the word when he said those who met with the Donald are “prostitutes” simply seeking “their 15 minutes of fame” according to the New York Daily News. 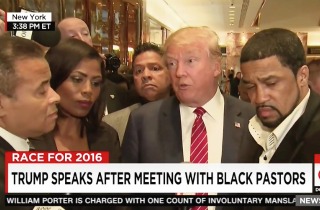 My mom has always told me that “birds of a feather flock together.” Take a look at the flock around Trump…To his left is Rev. Omarosa Manigault-Stallworth…I remember when she became a reverend as a I wrote a post about it “Bad Girl Gone Good: Omarosa Manigault-Stallworth.” At the time when I wrote the post, she had “two categories on her Web site: naughty and nice. On the nice page, she [was] dressed in a white flowing gown with her hands outstretched presumably pointed to heaven. I guess she [was] dressed as an angel. Well, on the naughty page, she [was] undoubtedly dressed as a devil. She [had] horns on her head and is in some red pleather get-up with her stomach showing.”  According to her current website, she is an assistant pastor of Weller Street Missionary Baptist Church on Skid Row in Los Angeles” and that, ironically, she preached her first sermon at Pastor Jamal Bryant’s Empowerment Temple in Baltimore, Maryland. But most of us know her as that crazy chick from Donald Trump’s reality show “The Apprentice.”

To the Donald’s right is Dr. Darrell Scott. Scott is married to Prophetess Dr. Belinda Scott, who was featured on the canceled show “Preach,” which was billed as a docuseries on Lifetime. Presumably, it was cancelled due to ratings, but some think the show may have been canceled after 15,000 people signed a change.org petition calling for the show to be yanked off the air…Tachina Carter, who started the petition, said “Preach” was “TRAVESTY to the Christian Community.” She went on further to say:

The women aka Prophetesses are making a MOCKERY of the church and promoting foolish behavior that is not necessarily a true representation of the REAL power of God. Cameras do NOT belong in the church filming the “spiritual” things that society as a whole does not understand. By airing this show it will cause more harm than good to the Christian community who already has a difficult time in sharing “The Good News” of Jesus Christ to the masses. 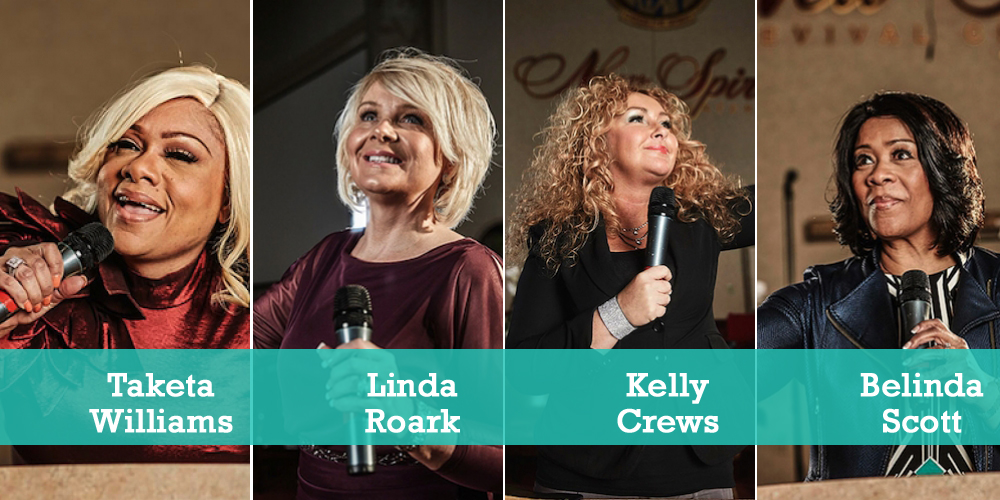 Well, honey, Prophetess Belinda Scott went off on her Facebook page according to an article from The Christian Post.

We now live in a world were every word about anyone, whether it’s your personal opinion or not; if it’s NEGATIVE or HATEFUL and DEGRADING in anyway against RACE, SEXUALITY or LIFESTYLE or LEARNING and BEHAVIOR disorders…you can’t say that…but, I watch hatful people who say they love the Lord, type like that FROG typing at that machine …TURN UP ON ‪#‎PREACHTV‬! A show that is not mocking the church, but exploring the lives of believers in the Church and hear me out first. The word reality is this …the state of being real, a real event or state of affairs, One, such as a person, an entity, or an event, that is actual. Now, do I hear from God…YES, did He call me to be a PROPHETESS, YES, Have I and Do I hear God’s voice concerning events, people and issues…YES! Did I see these attacks against us coming….YES! Is there a harvest on the way….YES!!!

I wrote some recaps about the show, one, “Have You Heard of Prophetic Dancing?! ‘Preach’ Episode 2 Recap…” of which features a view into the relationship of Dr. Darrell Scott and his wife Prophetess Dr. Belinda Scott.

I’m not saying that if you appeared on a reality show (Hello Donald Trump), everything you do from that point on is a ploy for publicity, but this picture is not a good look…

The Black Church in America is our greatest heritage and our greatest legacy. To demean it by cozying up to a man who does not seem to care about the souls of black folk is akin to selling our souls for a mess of pottage. We cannot sell our birthright under the guise of building bridges when the architect of the bridge is building a bridge to nowhere.

I’m not saying that meeting with an adverse political candidate is wrong in and of itself, but that meeting has to be couched in sincere conciliation. The Donald proved that his motives were less than savory when he said a meeting was on par with a political endorsement…

All that to say, God will not bless a mess…