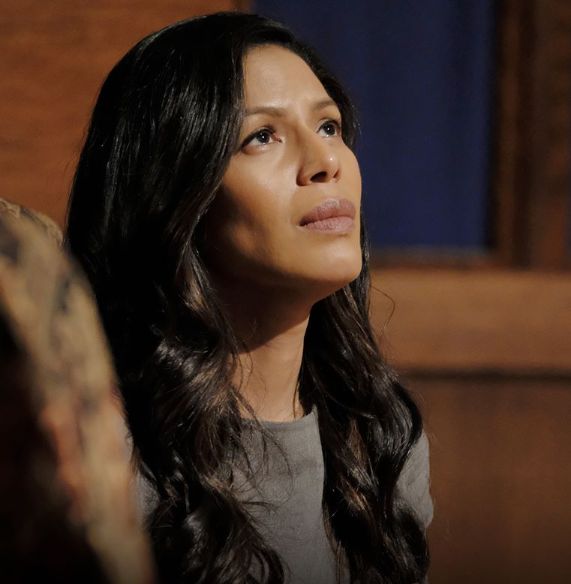 Saints, pull up real close to your laptops or your phones because I’m about to serve you from the sumptuous feast that was laid out in this OWN’s “Greenleaf” mid-season finale !!! And you gon be licking your fingers too because it was sooo juicy!!! Taste and see that the Lord is good! LOL

Remember at the end of episode 7, last week’s episode, Grace sped off the Greenleaf estate in a Greenleaf security truck to chase down Mac after he boldly sent flowers to the estate in honor of the one-year anniversary of Faith’s passing? Well, this week’s episode starts off with Grace careening through the woods, pressing her foot on the gas until she loses control of the truck. The truck catapults into a tree and Grace’s face lands on the steering wheel with the air bag deployed. For a second, I wonder if she is dead. But I’m like the heroine of the show cannot be dead at this point. And as soon as I have this thought, she stirs and then wakes up, stunned to realize what happened. She crawls through the window and then calls Darius the journalist on her cell phone. (Am I the only one who thinks the truck was about to blow up? I guess I’ve seen one too many action movies! LOL!) I thought Darius and Grace were through, but obviously, I was wrong.

He takes her back to the estate, where he is enthralled by the grandeur of the Greenleaf home. I guess it’s one thing to write about the Greenleaf dynasty, but it’s quite another to see it up close. He tells the family that Grace was “lucky” to have survived to which Bishop responds with, “We don’t believe in luck.” Grace explains the accident by saying she swerved to avoid hitting a deer. Once Darius leaves, Bishop says, “If you ask me, I don’t  think that was any deer.” He tells his daughter that she has to stop pursuing Mac and Sophia tells her the same thing. Grace says, “We all have our crosses to bear.” Sophia says, “Then you are mine.” Can you imagine telling your mama that she is your cross to bear? I can’t…

When Charity and Jabari get together, it won’t be by accident! As Charity is caring for her son, Jabari calls to invite her to Nashville to record with a group that is coming in from L.A. Y’all know recording won’t be the only happening, right? She agrees to his invitation, but now she has to figure out who will take care of Nathan while she is away.

Before the Triumph train crashes, Jacob finally divulges Basie’s poker scam to his wife Kerissa. Kerissa calls Basie and his wife Tasha Bonnie and Clyde and says she should have known something was up when she found that one-hundred dollar bill on the floor. She tells him he’s got to get out of this situation, but whatever he does, he better not go “crawling back to that mansion and that sneering a** mom of yours.”

The “relationship” that Mac has with his girlfriend Lorraine is like a badly choreographed dance. It’s not free flowing or joyous. Everything he does or says is to squelch her women’s intuition which is trying to tell her that this man is no man at all. She’s living with a monster but she gon learn. The lies that some women tell themselves to keep a man is simply sad.  According to Mac, his niece Sophia is the one who is blowing up his phone all day and or all night although we know it is Michaela from his old building. Lorraine says, “What kind of niece calls her uncle so often?” He says, “I like to be there for her if she needs me.” She then admits that she knows what people are saying about Mac, but she doesn’t believe them. She tells him she loves him. Dumbo.

Outside of whatever church the couple are attending, he calls Michaela to tell her she needs to stop calling him. Michaela says her mother has gone schizo, and she needs a place to crash. “I don’t have anyone else,” she says. But Mac still shuts her down for now.

Charity looks like she is ready to get her dance on at the club although she is singing at Sunday morning worship service. Her dress is fitted and short. Kevin notices,  but that doesn’t stop him from glancing at Aaron during the church service.

Across town at Triumph, Basie Skanks listens to his headphones, dancing around and what not in his office before his Sunday morning service starts. He is trying to get pumped as he wants to make a “withdrawal from the banks of Heaven” he tells Jacob, who catches him while he is dancing. Yes, he expects his flock to make up for the funds he lost in poker. He is a delusional shepherd. In service, he tells them to admit they’re “in sin” and they need to “dig deep” and “sow a seed of faith.” Then he says, they got “skanktafied.” See what I mean?

Back at Calvary, Bishop tells his flock that while he could preach about the wages of sin, he wants to talk about the gift on the other side of the equation. “To sin means to turn away, but to repent means to turn back.” I know that Bishop is no angel, but unlike Basie, I really believe that Bishop believes in the power of God even if his humanity fails him from to time. Grace looks at her father as if she wants to repent of trying to avenge the death of her sister on her own instead of leaving the vengeance to God as He commands. But she doesn’t know how it seems.

Kevin agrees to care for his son while Charity goes to Nashville and she says he can stay at the estate while she is gone. Little does she know that while she has to travel across the state to see her soon-t0-be new bae, her husband’s soon-to-be new bae will be just down the hall from her. She may as well be “dancing the dark.”

The dance between Mac and his age-appropriate beard abruptly, and I mean abruptly stops when he gets a call from Deputy Mayor Leonard who says he will not be getting a job for him after all with his “sick self” because of pushback he has already received. He delivers the final blow when he says, “Lose my number.” Mac believes Grace got to the deputy mayor when Jacob was the one who threatened him. When Lorraine asks him who was on the phone, instead of lying as he had in the past, he says, “None of your business.” He then proceeds to call her everything (including “bottom-shelf” and “off-brand” ) but a child of God before telling her to get out! And the woman didn’t want to go although she did leave. Smh. He then calls Michaela and asks, “You still need a place to stay?” I guess since he has no job prospects, he has nothing to lose by revealing his true character.

If Zora and her boyfriend Isaiah were dancing to “Cha Cha,” the music has stopped . He invites her to listen to him record a song at a studio, but when she truthfully tells him that a couple of his notes were flat in front his friends, he asks to speak with her privately. He clutches her arms and tells her, “Don’t do that in front of them.” It’s obvious this guy may be an abuser so Zora calls her cousin to pick her up. The only problem is that Sophia is supposed to be on the way to meet her mother and Darius at a restaurant.

Basie feels betrayed when Jacob comes to him and offers to pay Triumph 2’s debt if Basie would allow him to have the church and disassociate it from the original Triumph. When Basie asks how he is going to get the money, he says he has the money as it was a wedding present from his parents. Yes, Jacob had the trump (not Drumpf) card all along. He says Basie is playing a dangerous game with Triumph’s church members. “If you mess with black people’s money, they will rise up and take it back.” Got that right! I despise a money-grubbing, dishonest pastor. I’m so thankful that I was raised by an honest and upright, God-fearing pastor.

At Mac’s apartment, Michaela gets comfortable on his sofa as Mac pours two glasses of liquor before they watch “Imitation of Life.” Darius and Grace wait for her daughter to show up to meet them for dinner at Farm & Table. Michaela and Sophia do have similar looks, and it’s clear that Sophia could have been one of Mac’s victims if Grace had allowed him to get anywhere close to her daughter. I’m so creeped out as I watch Mac touch Michaela’s hair as she sleeps. Then he touches her knee and continues to move his hands upward. He attempts to kiss the child when she wakes up and kicks at him until she is able to escape his grip. Thankfully, she runs out the apartment.

After tucking in Nathan, Kevin takes the baby monitor to Aaron’s quarters where he and Aaron kick back and have a beer. Aaron gives him advice on finding a place since Nathan can’t seem to find anywhere to rent. Kevin tells Aaron, “Thanks for being so nice to me through all this.” Their arms are already touching and then they kiss! After this, Kevin may find a way to keep living at the estate.

Mac the monster calls Grace and tells her, “You should have left it alone, Gigi.” Grace leaves the restaurant and rushes over to Mac’s house. She believes her uncle has done something to Sophia to retaliate against her although she doesn’t quite know what her uncle is talking about. He calls his niece a female dog and their limbs entangle as they fight. They fall to the floor and Mac lands on top of his niece. With his sweaty, contorted face close to hers, he grabs her throat and squeezes. For the second time, I wonder if the heroine is about to die. But just before the life is squeezed from her, she finds a piece of the broken liquor bottle and sinks the shard into his neck! As the blood gushes from his wound, she screams, “Tell me where she is!” Mac got what was coming to him, but if he is dead, what will happen to Grace?! See why God says, vengeance is mine…

And then it’s over! Wasn’t that good? Are you satisfied or do you want more?!  I guess we will have to see what happens when OWN’s “Greenleaf” returns this summer!

Thank you sooo much for reading my Greenleaf Mid-Season Finale Recap, Season 2 Episode 8 and my other recaps so far.

Check out a snippet from “And the Sparks Fly Upward” below…