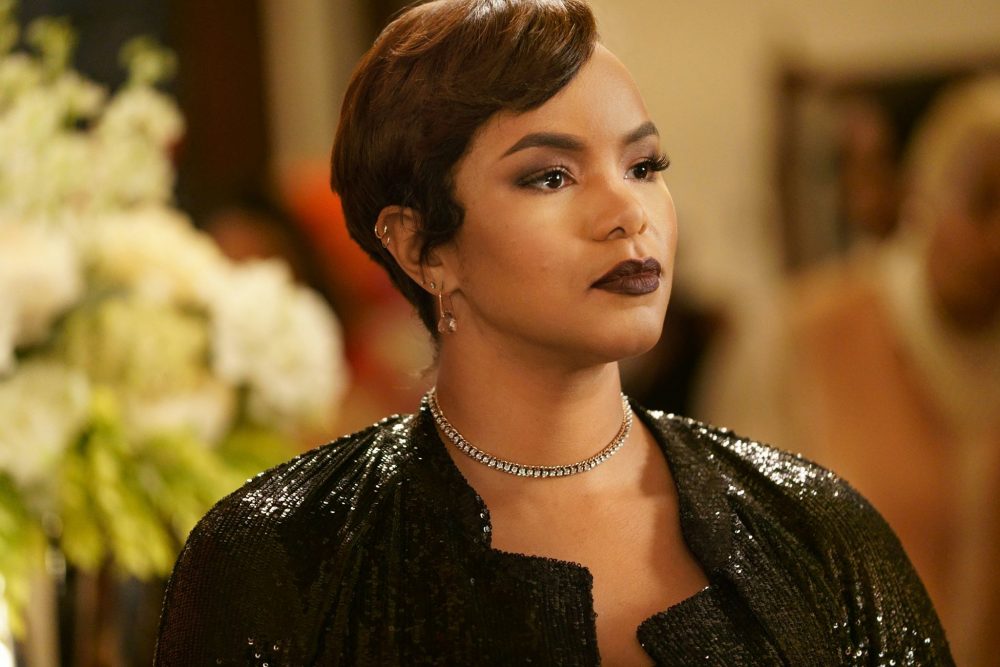 Here we are again…Greenleaf Season Premiere Recap, Season 3 Episode 2: The Space Between…

Ahhh….What can be said about “The Space Between,” the title of tonight’s episode? I guess that all depends on your view of space. If you see space as a positive thing, space can provide room for people to grow. But if you see space negatively, space enables people to grow apart. Based on what I saw tonight, space is both a positive and a negative for the Greenleafs. When the Greenleafs make it through this season, they will have grown and grown apart. But before I get too philosophical, let’s get into the particulars of tonight’s episode!

Although Bishop has traded his bed at the Biltmore Hotel for a bed at the Greenleaf estate, he is still in the guestroom bed! Although sleeping in the guestroom bed feels like “sleeping on coconuts,” Lady Mae doesn’t care and offers him the couch if that doesn’t work. She explains to him they may be trying to fool Ms. Clara but they can’t fool themselves nor their children.

The next morning, Lady Mae and Bishop are dressed in matching royal blue although they did not sleep in the same bed. Apparently, they plan to resume their duties as heads of the church and will conduct some sort of marriage seminar! When Grace questions their authority to be an authority on this topic, he tells her that though they may be sinful what they will say about marriage is still true. But Lady Mae doesn’t leave it at that. She uses the opportunity to pick a fight with her. (Maybe Grace isn’t her daughter because she stays fighting with her for some reason.) Lady Mae chides Grace for scampering across Memphis like a rabbit. In other words, she is aware that Grace is having relations with Darius while being on staff at the church.

Speaking of Grace, while her inclination is to see Rochelle Cross as foe, she attempts to make her a friend by calling her to ask her for her help in starting a legal fund for victims of domestic violence. But Sofia knows something is off and asks her mother why uses that the same “fake cheerful voice” that she uses with Sofia’s father. But hey, keeping your friends close and your enemies closer is a top tool of the trade!

I’m not old enough to have watched black and white westerns but I would guess that Lady Mae and Rochelle Cross would have made excellent dueling cowboys on a western although they are women. They are cut from the same impenetrable cloth and are willing to bust a cap if the occasion calls for it. When Rochelle demonstrates that she knows some of the personal Greenleaf business by asking  Lady Mae how Zora is doing following her cotillion caper and subsequent return, Lady Mae looks ready to shoot her. Rochelle knows right then and there she is dealing with a real one although their ultimate showdown is yet to come.

Tasha is not as devious as Rochelle, but she is trying to take back Triumph’s territory by taking down Jacob. Using her feminine wiles, she wants to close the space between her and Jacob and cozies up to him in their conversation about hard-to-pronounce names on new member cards. Men can be so clueless sometimes. Conveniently for Tasha, Kerissa’s school administrative duties are keeping her away from Triumph as she has to meet with irate parents. When she is able to break away and join Tasha and Jacob during the new member meeting at the church, one of the new members mistakes Tasha for the First Lady! “That was awkward,” Kerissa says. As smart as she is and as much as she admires Lady Mae, I don’t know why she doesn’t realize that Tasha is planning her work and working her plan! But I guess there are book smarts and street smarts…Like my mama says, there can only be one woman (First Lady) in a house and that includes of house of God!

Jacob realizes that Kerissa, with her other responsibilities, is feeling distant from the business of the church, particularly after what happened at the new member meeting. Since Tasha’s plot to ingratiate herself with him is working, he allows Tasha to convince him to buy jewelry for his wife. They go shopping together at Tasha’s favorite jewelry store and she picks out this gaudy faux gold and pearl concoction that is not Kerissa’s style at all. How much you want to bet that when Kerissa rocks that necklace the following Sunday at church, Tasha will have on the same necklace?

Now that Bishop and Lady Mae are under one roof again (at least for now), the dynamic duo team up to pimp Ms. Clara out of her Powerball money. They invite her over to the estate for dinner. She senses that something is off, but Lady Mae just tells her she has changed the art in her home. If only the aesthetics of the Greenleaf home was the problem! Apparently, Clara is a widow and reminisces about her marriage as she asks the Greenleafs what they have planned for their soon-to-be 45th wedding anniversary. The question seems to take the couple by surprise and it becomes clear that they have just about forgotten that their anniversary is coming up!

Nevertheless, the two are successful in coercing Clara to come off of her cash! “Nice work First Lady,” Bishop says. But Lady Mae aine tryin’ to hear all of that. She confronts him about telling Rochelle their family business regarding Zora. She asks him if he told her while they were at the Biltmore Hotel together! Bishop says, “Are you willing this non-existent affair into being a real one?” It’s true. I think a person’s insecurities can cause what they fear the most to happen. But he follows up with this great line – “I’ve never seen a woman so fragile that she cannot consider her own sinfulness.” Wow. That packed a wallop. And at the same time, Bishop betta be careful who he is calling a sinner. When you start calling out people for their sins, don’t be mad when they turn the tables on you. Let he who is without sin cast the first stone.

Speaking of the family’s wild child, Zora thinks she’s as sly as a pimp when she tries to get her cousin to buy a prepaid phone (presumably to talk to her boo Christian Breezy) with the money that she was swindled from Triumph’s offering. But Sofia is not stupid and for the umpteenth time attempts to talk some sense into her cousin. “He hits you and he treats you like crap.”

Since Zora has loving parents, I really don’t get why Zora is attracted to this boy. Anywho, Sofia does convince Jacob, at the very least, to return Zora’s TV to her, but certain channels have been restricted! LOL.

Kevin is trying to bridge the space between him and his son but Charity is standing in his way. Just when she is about to hand over their son to him in his new place, Aaron walks in with groceries! He claims he doesn’t live there, but he used a key to get in. As a result, Charity cancels her appearance on the tour so that she can stay with her son. Not only is she losing out on performing on the tour, her budding relationship with Jabari seems to be a lost cause as well. He hangs up on her when she tells him that she won’t be returning! That was sooo rude, particularly because she is only trying to be a good mother. Jabari may need to be kicked to the curb for that!

Grace’s relationship with the lost soul that is Darius is not gonna last. I hope y’all know that. First of all, they are fornicating. And secondly, he has nothing but contempt for the Greenleaf clan. He actually tells her to not be hypocrite when she wants to return home after doing the do.

But she does return home. Maybe it’s her own guilt that drives her to take this drastic action or maybe she just really dislikes her mama, but she confronts Lady Mae about having an affair with Lionel! (Bishop reveals Lady Mae’s affair after Grace asks his father why he won’t allay Lady Mae’s fears about his friendship with Rochelle Cross.) You already know this causes Lady Mae to lose her mind although she does not deny it. Grace then tells her mother that she is done feeling bad, wrong and dirty for what she is doing…So I understand her not feeling guilty anymore when it comes to her mama but what about when it comes to her relationship with God?!

But Grace is not content to stop there. Maybe she is a bull in china shop! She confronts Rochelle about her relationship with her father the next time they see each other. “Is there anything. Is something going on between you and my father?” Rochelle pretends that she is upset and walks off in a huff but later a sly smile is seen on her face. She returns to Grace and says, “We can’t let anything stop us from reaching our goal. This is the work of the Lord. You’re stuck with me now.” I bet…

Continuing in the theme of lost relationships, Lady Mae and Bishop reach an impasse. Lady Mae is so thoroughly incensed about Bishop telling Grace about her affair with Lionel, she, wearing all black attire, confronts him in his office. She tells him as soon as the check from Ms. Clara has cleared and the IRS has been paid, she is divorcing Bishop!!!

Check out some of the highlights of tonight’s episode below…

Thank you sooo much for reading my Greenleaf Season Premiere Recap, Season 3 Episode 2: The Space Between and my other recaps so far. If you would like to keep up with OWN’s “Greenleaf,” and my recaps, please click on this link to subscribe to my blog 🙂!

One thought on “Greenleaf Season Premiere Recap, Season 3 Episode 2: The Space Between…”