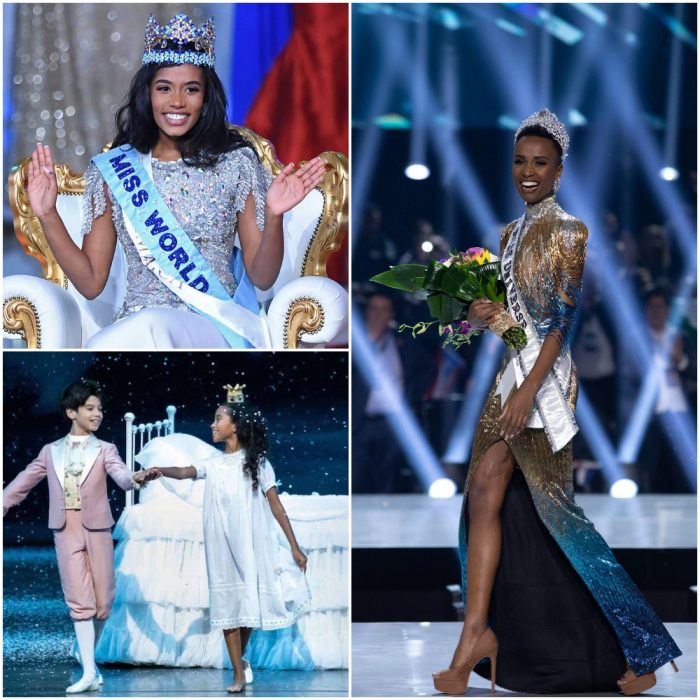 Happy New Year (and Merry Christmas since I missed that…)I took a sabbatical from blogging while I launched my debut novel Destination Wedding but I’m BACK now! I will tell you more about that launch in another blog post, but in the mean time, let me focus on the goal of this blog – blogging the cross section of faith, relationships and pop culture!

So much has happened during my month away and even in these first days of this New Year and I will get to that – but slowly as I get back to my mostly twice a week blogging schedule. In the mean time, as I get back into blogging shape (LOL), I’m back with my monthly roundup of blog posts and or magazine articles for black Christian women. Below is my Top 10 monthly roundup of blog posts and or magazine/newspaper articles for black Christian women for December but you don’t have be a black Christian woman to to check them out. As usual, let me know if you like my list! Enjoy and share!

Excerpt: The crowning of Miss World 2019 has closed out this year’s historic pageant circuit, marking the first time the titles for all five top beauty contests were won by black women. On Saturday, Jamaica’s Toni-Ann Singh was named Miss World, joining a 2019 cohort of advocates for prison reform, women’s rights and music education who used their platform to address conventional beauty standards: Miss Universe 2019 Zozibini Tunzi, Miss America Nia Franklin, Miss USA Cheslie Kryst and Miss Teen USA 2019 Kaliegh Garris. “To that little girl in St. Thomas, Jamaica and all the girls around the world — please believe in yourself,” Singh wrote on Twitter. “Please know that you are worthy and capable of achieving your dreams. This crown is not mine but yours. You have a PURPOSE.” See more at: washingtonpost.com.

Excerpt: Another black woman has won a beauty pageant, joining the reign of black queens in major beauty pageants around the world. Miss Guadeloupe, Clémence Botino, was crowned in the 90th edition of Miss France pageant on Saturday, 14 December. See more at: briefly.co.za.

Excerpt: Rosa Parks was memorialized in the city where she was once arrested for refusing to give up her seat to a white person … and where a statue of her now stands tall. The bronze life-size figure was unveiled Sunday in Montgomery, Alabama with the help of Mayor Steven Reed — who recently became Montgomery’s first black mayor — as well as Alabama’s governor, Kay Ivey. There were other important people there too, though. Mary Louise Smith was on hand for the unveiling as well — she’s one of the original plaintiffs in the Browder vs. Gayle case that ultimately desegregated buses in Montgomery a year after Parks was arrested. See more at: tmz.com.

4. “‘The Clark Sisters: First Ladies Of Gospel’ Trailer: First Look At Biopic On Iconic And Influential Group” by Shadow and Act

Excerpt: Lifetime has released the first trailer for their upcoming film, The Clark Sisters: First Ladies Of Gospel. The trailer was unveiled in a promotional video for the movie, introduced by Kelly Rowland. Emmy nominee Aunjanue Ellis stars as the sisters’ mother, Mattie Moss Clark. The sisters are Christina Bell as Twinkie, Kierra Sheard as Karen (her real-life mother), Sheléa Frazier as Dorinda, Raven Goodwin as Denise and Angela Birchett as Jacky. The project is executive produced by Queen Latifah, Mary J. Blige and Missy Elliott. The description:  The Clark Sisters: The First Ladies of Gospel recounts the story of the highest-selling female gospel group in history and their trailblazing mother, Mattie Moss Clark. Credited with bringing gospel music to the mainstream, the five Clark sisters overcame humble beginnings in Detroit, enduring abuse, loss, rejection, betrayal and sibling rivalries to achieve international fame as icons of the gospel music industry. Christine Swanson is the director of the Sylvia L. Jones-written script. See more at: shadowandact.com.

5. “Brooklyn Church Evicts Its Former First Lady Before Christmas and Defends the Action” by Nigel Roberts

Excerpt: DITMAS PARK – A dispute that centered in part on how Black churches should treat their pastor’s wife came to a legal resolution. The courts ordered the removal of former First Lady Paula Scarlett-Brown, widow of the late Archbishop Roy E. Brown who founded the Pilgrim Baptist Church in Flatbush, from her home that the church owns. While the legal dispute ended, a moral debate continues about first ladies. See more at: bklyner.com.

Excerpt: “There’s a lot of things that [as a Black person/woman] I’ll bring to the table that our team will bring to the table that our clients aren’t aware of,” she asserts. “I think people think that you can get a moment like this [without] people of color, or Black people. And the reality is you can’t. Every community is specific, and you just won’t find these moments without people who know how to find them, and know how to respond.” See more at: dailydot.com.

Excerpt: “I’ve done a lot of gospel, so I’m kind of insecure because mainstream [fans] don’t know my voice. And sometimes social media… it’s bad when you read the comments. I like engaging with people on social media. I don’t want to not talk to the people that are being gracious all because there are some mean ones out there.” See more at: xonecole.com.

8. “6 Things To Consider Before Getting Into An Interfaith Relationship” by Shellie R. Warren

Excerpt: Being that I am a marriage life coach, I often get asked if I subscribe to interfaith marriages. Well, being that I am also a Bible follower (not an evangelical by any stretch, but I do strive for discipleship—John 8:31-32), I have to take into account that the Bible has interfaith couples. One that immediately comes to mind is Boaz and Ruth. He was Hebrew, she was a Moabite—there you have it; an interfaith relationship. (By the way, if you read the story, you might change your tune about “I’m waiting on my Boaz.” See more at: xonecole.com.

Excerpt: At just 11 years old, Charlotte Nebres has made history. George Balanchine’s The Nutcracker opened Friday (Nov 29) at New York City Ballet, and for the first time in history, a Black girl will be playing the young heroine, Marie.  Charlotte Nebres was cast in the famous production which dates back to 1954. Charlotte was only six years old when Misty Copeland became the first female African-American principal at American Ballet Theater and recalls being inspired by seeing someone on stage who looked like her, The New York Times reports.  Now, Charlotte is a ballerina at the School of American Ballet and will be making a name for herself on stage in The Nutcracker. See more at: bet.com.

Excerpt: The road to success has lots of twists and turns, but at least Crystal Windham knows how to ride in style. Her artistic talent and creative thinking are exactly what led her to become the first African-American woman Director of Interior Design at General Motors in 2008. While most people think of “interior designers” as style gurus who only beautify homes, Windham does the same for what she calls people’s second homes: cars. See more at: thegrio.com.