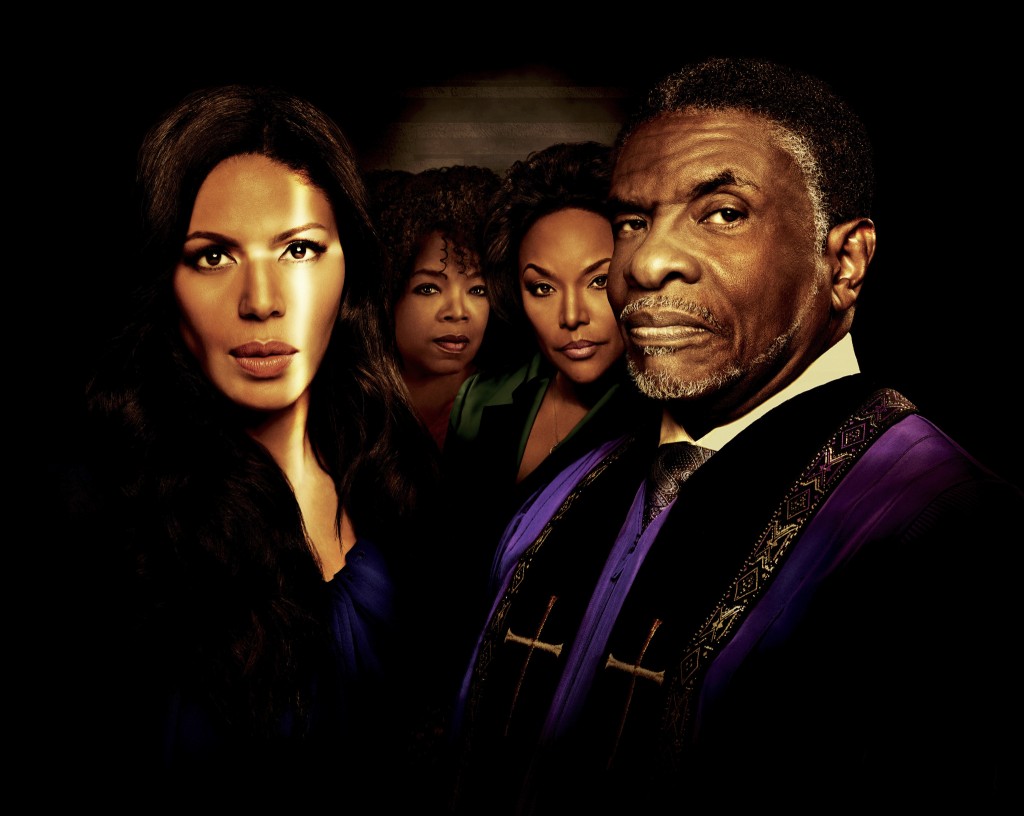 Look at Oprah at the back looking all mysterious…

The new original series “Greenleaf,” featuring Oprah Winfrey’s first recurring scripted television role in two decades, will launch with a two-night premiere on OWN: Oprah Winfrey Network on Tuesday, June 21 at 10 p.m. ET/PT and Wednesday, June 22 at 9 p.m. and 10 p.m. ET/PT on OWN.  The show was originally supposed to premiere on this Tuesday, May 24 & Wednesday, May 25. The megachurch drama from Emmy nominated writer/producer Craig Wright (“Lost,” “Six Feet Under”) and Lionsgate Television will regularly air on Wednesdays at 10 p.m. ET/PT for the remainder of its 13-episode first season.

“Greenleaf” centers on the journey of estranged daughter and disillusioned preacher Grace Greenleaf (Merle Dandridge, “The Night Shift”) who has returned home after 20 years on the occasion of the mysterious death of her sister, Faith.  As she reenters the world of Calvary Fellowship World Ministries, the Memphis megachurch run by her powerful parents Bishop James Greenleaf (Keith David, “Enlisted” and “Community”) and Lady Mae Greenleaf (Lynn Whitfield, “The Josephine Baker Story”), it becomes evident that things are not as virtuous as they seem and that the family’s outward display of faith hides sin and misdeeds.

In the season premiere, directed by Clement Virgo (“Book of Negroes”), Grace and her teenage daughter Sophia (Desiree Ross, “Falling Skies”) are warmly welcomed home by Grace’s father, Bishop James Greenleaf, but tensions quickly rise soon thereafter at a family dinner in the Greenleaf mansion.  Grace’s mother is cold and hostile; her sister-in-law Kerissa (Kim Hawthorne, “Rake”) questions her about her faith; and sister Charity (Deborah Joy Winans, “Whitney”) erupts with jealousy at the suggestion that Grace might preach at Calvary.

Later, blues club owner and Grace’s Aunt Mavis (Oprah Winfrey, “Selma”) discuss the circumstances of Faith’s death and Mavis reveals some shocking information about Grace’s uncle “Mac” (Gregory Alan Williams, “Terminator Genisys”). Mavis is still estranged from the Greenleaf family and it starts to become evident that she intends to use Grace to sow the seeds of its destruction.

The new original drama series “Greenleaf” from award-winning writer/producer Craig Wright (“Lost,” “Six Feet Under”) takes viewers into the unscrupulous world of the Greenleaf family and their sprawling Memphis megachurch, where scandalous secrets and lies are as numerous as the faithful.  Like so many megachurches in America, Calvary Fellowship World Ministries is more than just a house of worship. It’s a home. It’s the center of the community for the thousands of predominantly African-American members who attend services there.  But beneath its steeple lies a den of iniquity — greed, adultery, sibling rivalry and conflicting values — a multigenerational matrix of deception that involves the church’s founding family, but also extends to the congregation and prominent members of the Memphis community and beyond. Yet, amidst all of the mayhem and deception, the power of something greater persists, calling everyone to conscience for their sins.

“Greenleaf” is produced for OWN by Lionsgate Television.  Executive producers are Oprah Winfrey, Craig Wright and Clement Virgo.

Check out the extended trailer below…Kinda reminds me of a Christian version of “Empire.”