I watched several hours of The Queen of Soul Aretha Franklin’s funeral or homegoing (which word you choose is likely a reflection of your cultural origin) on Friday, but I must admit I missed the The Rev. Jasper Williams Jr.’s (pastor emeritus of  Salem Bible Church in Atlanta, Georgia) eulogy of the Queen of Soul on Friday. I mostly watched to hear some good ole black church saaangin and see who was there! Yes, I can be shallow like that. But as far as what the pastors and preachers had to say, I figured it would be what we always hear at funerals – some variation of the person was a good person or decent person, etc. (eulogy definition – a speech or piece of writing that praises someone or something highly, typically someone who has just died.) and a come- to-Jesus- while-there- is- yet-blood-running-through-your-veins appeal at the end. I’m in church every Sunday and when I was growing up that was every Sunday and Wednesday so I’ve been to many many church services and funerals/homegoings. But I’m not a preacher nor a pastor and don’t aspire to such a controversial calling but I probably could plan a pretty decent church service or homegoing if I was called upon to do so.

All that being said (written), that was why I didn’t pay attention. Some of you may wonder well wouldn’t that apply to black church saangin too. Probably but given the fact that this was the Queen of Soul’s homegoing, I figured the music would be on another level and it was. But I digress. So later on Friday, after this homegoing of all homegoings had finally commenced, I saw all kinds of chatter online regarding Rev. Williams’ eulogy.

From the AJC Article Pastor Who Delivered Aretha Franklin’s Controversial Eulogy Speaks Out:

“I need people to know that this eulogy was not reflective of God nor was it honoring to #arethafranklin nor did it offer comfort to the bereaved or give hope for tomorrow. It was, in fact, trash. And as long as we don’t boldly call this out we are complicit.”

“Aretha Franklin was a mother of four black boys, two of them she had as a teenager. She was all set to bail Angela Davis out of jail. Raised money for the CRM. This eulogy is disrespectful to her legacy. I’m upset. #ArethaHomegoing”

But since I hadn’t taken it in for myself, I had no thoughts on it. However, my mother told me my father, pastor emeritus of our church, Central Christian Church in Southwest Atlanta, approved it. So I was like, “Uh oh, if my father likes it” but many people that I “know” online don’t like it, there must be an old school/new school dynamic at work.

So finally this morning, I watched it and I kept waiting to be outraged, incensed at the implications and or Trump thread throughout the tirade, but I just wasn’t. Maybe if I had a theology degree as many people who have criticized the message do, maybe I would feel differently. But as a lay person with my own mind, I didn’t mind at all what Rev. Williams said. So below is not the thesis of a theological scholar and I highly respect them, but I respect my thoughts as well.

That’s all I got.

Also I want to note that this is NOT a case of the whole “touch not my anointed” thing in which people are scared to criticize and critique long-time and revered clergymen. NO ONE not even the clergy is above criticism and critique which is what happened with the priests who were allowed to commit pedophilia for years in the Catholic church…

Watch the whole thing for yourself below. What are your thoughts? 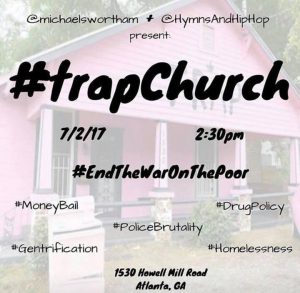 Here in the A for the past couple of weeks, folks have been flocking to rapper 2 Chainz’s Pink Trap House to take pictures in front of the hood anomaly. For those of you who have been privileged enough to not know what a trap house is,  a trap house is a “term used to define a crack house, or the surroundings in which a drug dealer or(trap star) would use to make their profit,” according to urbandictionary.com. In an effort to promote his latest album, “Pretty Girls Like Trap Music,” which debuted last month, 2 Chainz had a house in the A painted pink with the word “TRAP” painted on the front of it. Reportedly, the inside of the house is an art gallery. Since then, folks from all over have positioned themselves to take fun pictures in front of the 2 Chainz’s shrewd publicity tool and posted them on Instagram.

Below are just a sampling of these photos from ThePinkTraphouse Instagram page. 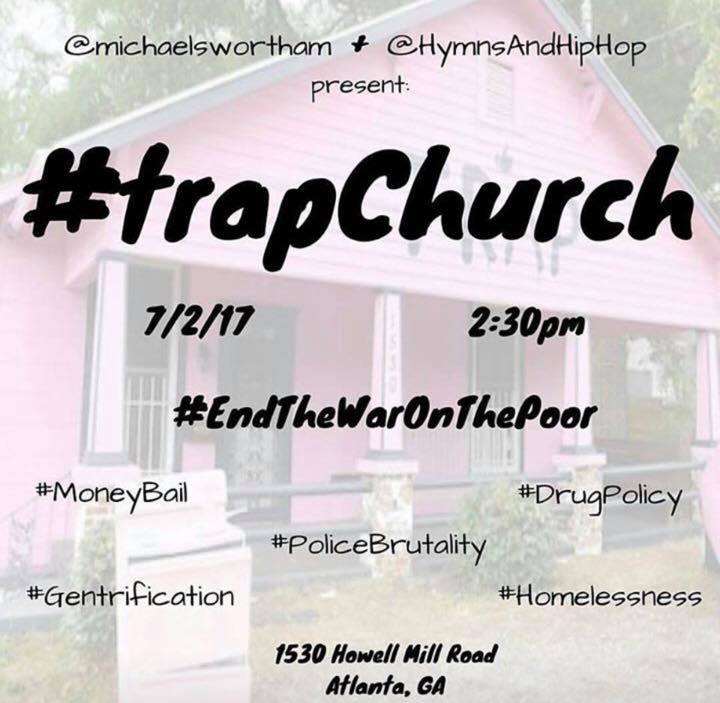 As you can see, I guess service was held this past Sunday. And yesterday, a free HIV testing was offered was at the Pink Trap House… 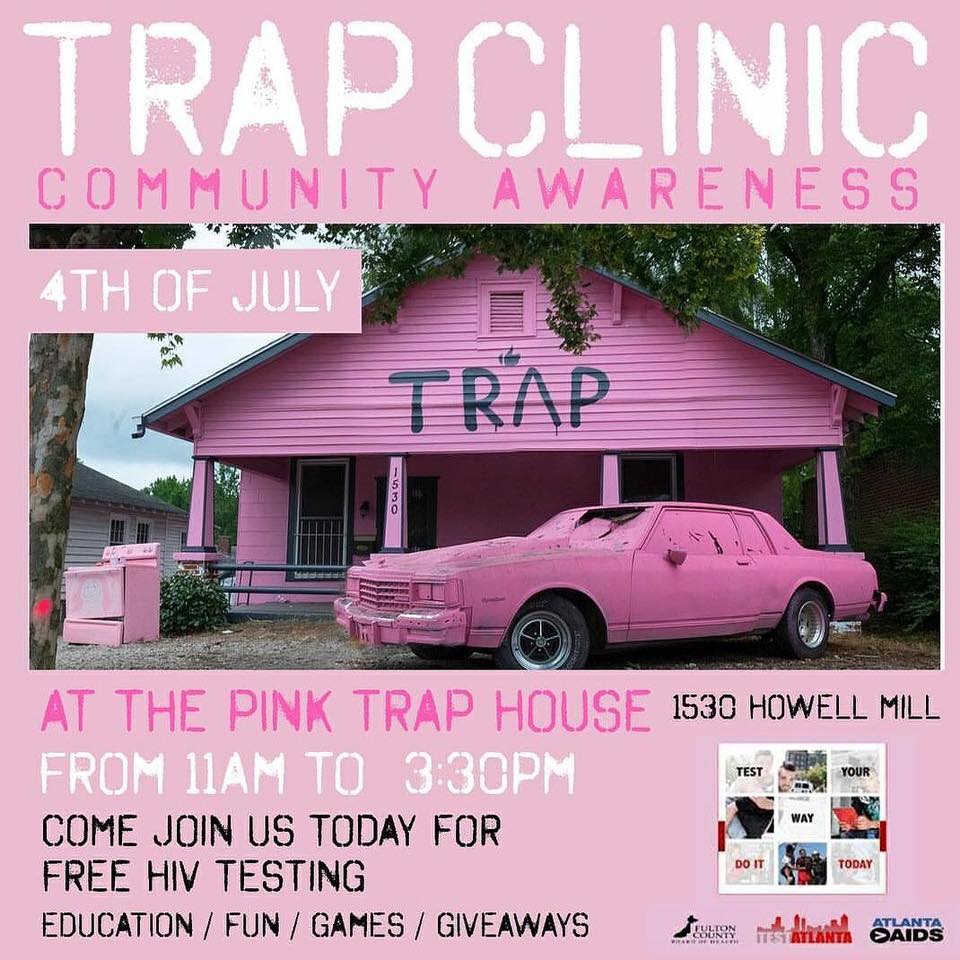 But Greenforest Community Baptist Church Youth Pastor Al Hollie Jr . says he hates the Pink Trap House (although he doesn’t disrespect 2 Chainz) which he talked about on his Facebook page on Sunday and since then has been reported by Fox 5.  Below is his original video, which has been shared at least 400 times. He told the news station that his father regularly visited trap houses where he used drugs and is still a substance abuser today. Hollie noted the generations of families can be affected by what happens in a trap house and said that the people who have been taking pictures in front of the Pink Trap House couldn’t have experienced what he experienced as a child nor grew up near a trap house.

My husband and I discussed this over the weekend, and I can see his point. He doesn’t think it’s cool to take a picture in front of the Pink Trap House either. What do you think?

And do you think despite the negative connotation of a real trap house that 2 Chainz’s publicity tool can be used for positivity? 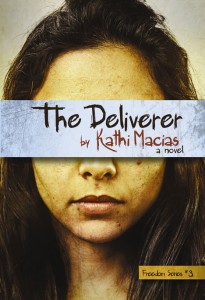 In every book I choose to read, I always hope to learn something new. In “The Deliverer” by Kathi Macias, I learned about the hidden worlds of child sex trafficking and slavery. These are topics I would normally choose to avoid as these are likely the most reprehensible “industries” in existence, but Macias was able draw me into this dark world through the heroine of her book Mara.

In the third book of the “Freedom Series,” Macias tells how Mara, a young Hispanic woman who has been freed after years of sex slavery, must make conscious choices regarding a relationship with God, a potential romantic interest Jonathan and forgiveness to create new life for herself. Interwoven in Mara’s story are the stories of Lawan, a former child sex slave from Thailand, who is adopted by an American couple; Sarah, whose romantic desperation creates a heartbreaking love triangle; and Francesca, who wonders if she should give her soon-to-be born baby up for adoption.

Aside from the various stories of deliverance told in the book, I also appreciated how Macias was able to interweave diverse races and cultures in the book without being obvious. Both Mara and Francesca are Hispanic. Lawan’s new parents are an interracial black and white couple. And Sarah as well as some of the other characters are white. The book takes place in California, Mexico and Thailand.

For more information about “The Deliverer,” please check out the book trailer below:

For more information about “The Deliverer” and the first two books in the “Freedom Series,” please go to kathimacias.com.

If you would like to win a free copy of  “The Deliverer,” please see the link below. By entering the contest, you are also subscribing to my e-mail list 🙂 Don’t worry. I don’t e-mail very much 🙂 For more opportunities for free copies of “The Deliverer” by Kathi Macias, please visit Facebook.com/CSSVBT.KathiMacias.

Note: I was given a complimentary copy of this book from the author in exchange for posting a book review on my blog; however, the opinions are mine alone.

(Please enter your comment below in the comments section. Thank you :))