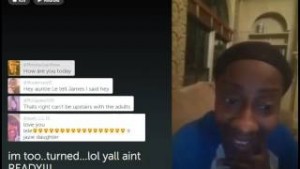 I was scheduled to write a recap of Season 1 Episode 7 of “Born Again Virgin” but after checking my Google Analytics this morning and seeing that my blog post on Le’Andria Johnson got some major hits yesterday, I decided to do a quick Google search on Season 3 “Sunday Best” winner and GRAMMY Award winner Le’Andria Johnson and why she was blowing up yesterday. And this is the result I got – “leandria johnson drunk on periscope.” Well, so I went to a link and this is what has caused the hubbub, according to to the September 8 blog post “Gospel Singer LeAndria Johnson Appears Drunk And A Lil Off On Periscope” on yallknowwhat.com.

No one loves Periscope as much as we do. The newest social media craze has gotten everyone broadcasting 24 hours a day. This is a dream come true for fans of celebrities. On the other hand, it allows the public to see different artists in their element and their comfort zone.

Unfortunately, this isn’t a good thing for some celebs. It proved to be a disaster for gospel singer Le’Andria Johnson last night. Thousands of viewers witnessed the Season 3 Sunday Best winner ranting for 10 minutes about different things. She admitted to drinking Patron during her Periscope video, she cursed a few times, and she was blasting secular music (Drunk In Love) in the background.

The video of Le’Andria Johnson on Periscope has seen been removed but the damage has been done. Whoa!!! I have lots of thoughts about this. First thought, Le’Andria Johnson has never claimed to be a saint. She is a Christian saint but not a saint by the most widely accepted definition. In my interview with her, the preacher’s daughter admitted she has been divorced twice and was pregnant as a single mother while recording her third album under “Le’Andria Johnson, The Experience.” And she even started Imperfect People Changing Ministries during that time period. As a preacher’s daughter myself and an imperfect one at that, I have real empathy for her and her story. While I’m not a two-time divorcée or have given birth to children out of wedlock, I’ve indulged in my fair share of sin. And there is a lot of pressure to be perfect as a pastor’s daughter that other Christians don’t understand. And Le’Andria Johnson spoke about that in my interview of her. 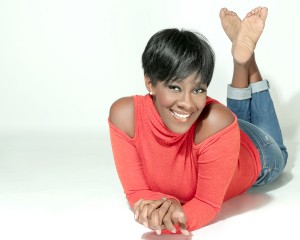 As a pastor’s daughter, did you ever resent the requirements of ministry on you parents?

All that being said, if Le’Andria Johnson was allegedly drunk on Periscope, blasting “Drunk in Love” in the background while cursing, is that wrong? Well, first of all, it’s funny to death…C’mon man, you know it is…Secondly, it was bad judgment. I don’t think anyone wants to see their favorite gospel singer turnt in real time with Beyoncé in the background…But here’s the thing…What if she likes to drink Patron, listen to Beyoncé and curse in the privacy of her own home  but did not broadcast it for the masses to see? Would that make her any less of a sinner – according to some people’s assessment? Would it disqualify her to be a gospel singer and minister? Before I answer these questions, there are two verses that should be referenced here…

Dear brothers and sisters, not many of you should become teachers in the church, for we who teach will be judged more strictly. James 3:1

I have never wanted to be a pastor because of that first verse. Pastors do get held to a higher standard. It’s a part of the job description. Le’Andria Johnson does not profess to be a pastor but she does have a platform as a gospel singer and minister so that verse could be applied to her situation too. But let me not be a hypocrite, I remember after my book came out, my father had a discussion with me about how I conducted myself in public. Basically, he told me that people would be watching me. And that is true. I remember I went to restaurant/club to a birthday party for a friend, and I was dancing with my husband and I felt someone looking at me. I came of age during the Booty Shake music era so when I dance, I’m not doing a two-step…And I remember on another occasion, I went to a restaurant with some friends who all ordered drinks, and I declined – not because I didn’t want one or think it’s wrong to have a drink but because of how it would look. I hate that. I truly do because I’m just a regular ole girl tryin’ to get this thang right with God at the end of the day…

But according to the second verse, it’s not about me – particularly in public. As a Christian, your main job is tell others about Christ. period. the end. And even if you like to get turnt in your house, if doing that in public will cause even one person to think you (the Christian) is crazy and that Christ may not be all that because of you, then you have to check yourself. I hate that too. I do. But it’s true.

So back to to the questions that I asked. We are all sinners saved by the grace of God, but the fact of the matter is that none of us, not even preachers and teachers, will be without sin until we get to Heaven. However, that being said, that is not an excuse to act like we don’t know what the Bible says because will will never get it right. In fact, that means that we have to depend on the Holy Spirit even more to do what is right…And the Holy Spirit will convict you of what is wrong and what is right and help you do the right thing according to YOUR personal relationship with God…For example, according to my own personal relationship with God,  I don’t have to listen to gospel music all day long…I love gospel music, but I’d die and have to go to Heaven right now if I had to listen to gospel music all day every day…And if you see me out and about acting “non Christianly,” try not judge me. God is not through with me yet, and I’m still working out my salvation fa sho…And trust that my personal relationship with God is the best thang that eva happened to me!!!

Finally, that’s why y’all need to stay off Periscope….

P.S. I hope to have my “Born Again” recap up by tomorrow…

9 thoughts on “Was It Wrong for ‘Sunday Best’ Winner Le’Andria Johnson to be Drunk Allegedly on Periscope?”