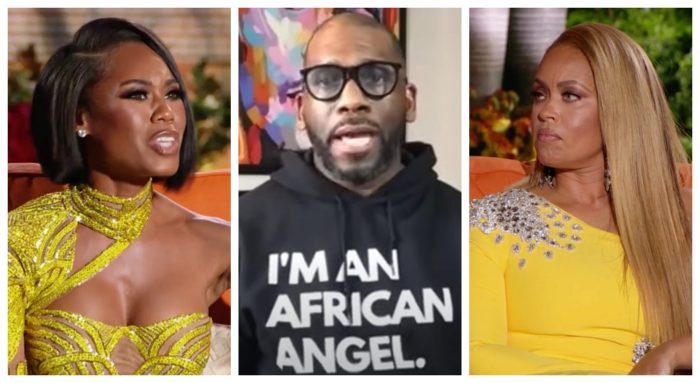 “I loves a messy pastor. God knows I do,” I decree and declare this Sunday morning in my Sofia from The Color Purple voice. Maybe that’s not right, but if you can’t tell the truth on a Sunday morning, when can you tell it, pray tell, Saints? Even before Pastor Jamal Bryant set foot in Atlanta to preach his first sermon at New Birth Missionary Baptist Church just two years ago on Dec. 9, he shook up the scene, and chile, for good reasons and not-so-good reasons, he continues to shake things up in the A and beyond.

And now Pastor Bryant has delivered a clap back to rival all clap backs. It was equal parts righteous, revealing and ratchet. But before we get into the specifics of the clap back, let me catch you up on the backstory. So apparently last Sunday, on the first episode of the reunion of The Real Housewives of Potomac, which I haven’t watched before but I will on tonight, Monique Samuels brought in a binder with tabs and everything to organize all of her receipts of misdeeds and mistruths regarding her castmates and used the binder to castigate them. (Aside: we have to thank Mitt Romney for bringing the “binder” to the culture. Remember his “binders full of women?” LOL) So Monique apparently had a tab dedicated to castmate Gizelle Bryant in which she accused Gizelle’s man, which is her former hubby Pastor Bryant, of cheating on her, referring to him as “Pastor Holy Whore.” That was the biggest allegation made, but there were other things she said, as Pastor Bryant addressed in his clap back.

Here’s a snippet of the reunion show.

So let’s get into this clap back, Saints. First let’s set the scene of this epic clap back. I imagine Pastor Bryant recorded this in his home as he is in front of a painted portrait of himself. Additionally, there are painted portraits of Nelson Mandela and Bob Marley. There are other striking painted portraits of black figures on the walls as well. Additionally,  Pastor Bryant is donning a black hoodie with the words “I’m an African Angel.” written in white words. Shout out to Paula White and her silly self! SMH! So just from the setting alone, we see that Pastor Bryant is coming from a righteous place. He’s not cowering somewhere. He is coming correct…

So next, Pastor Bryant pulls out his binder! Now, that is ratchet but reasonable. If Monique can pull out a binder, why can’t the pastor? Then he goes into why it took a bit to respond, he says he was working in the campaign to help his Morehouse brother Ebenezer Baptist Church Pastor Dr. Raphael Warnock and Jon Ossof get elected to the senate. That’s right, pastor. First things first.  Elections before entertainment. Then he explains he was also working with my Soror Pinky Cole and her restaurant Slutty Vegan for a community food drive. And lastly but certainly not least of all, he was honoring “the wishes of Gizelle who asked me not to respond, not to say anything.” He goes on to say, “So to those of you who were overwhelmingly concerned that I hadn’t said anything and had not given any defense because I was honoring what it is that Gizelle desired. Because of mounting moments that have happened in social media, I thought it prudent that I not remain silent so that my silence will not be confused with consent.”

Then he explains that his response is not an apology nor is he asking for forgiveness for anything. It is the right thing to say straight out of the gate. If you’ve done nothing wrong, there is no need to apologize nor ask for forgiveness. This is simply his response. He also says for that five seasons that his ex-wife has been on The Real Housewives of Potomac, he has never mentioned the show in a sermon nor on his social media nor in any of the 50-odd interviews he does a year. In other words, why is Monique talkin’ about him when he has never talked about her?  Additionally, he puts it out there that he has “not been an advocate for many reality television shows because I don’t think it represents the best of who we are, nor does it advance our progress, our maturity or our brilliance.” His statement juxtaposed with the backdrop is a powerful statement. Y’all pray for me though because I still love me some ratchet reality television shows 🙁

And he says that Gizelle’s participation in RHOP has been a “bone of contention” for years between the reunited couple. So with all of that background, the pastor, who is a human first, had to respond. He doesn’t even like reality television in the first place and then he becomes the hot topic on a reality show! Again, to reemphasize this point, he was right to respond! He also reveals that while they were in the “baby steps” of their reconciliation, he agreed to be on the show “against my better judgment, against my wisdom and even against my convictions. I wholeheartedly regret participating, and I want you to know that I will never be on The Housewives of Potomac or anything in that franchise ever again.” That is a revelation for anyone wondering if the pastor will use the show to expand his platform. Nope. Not happening. He says the show has been a “gross misrepresentation of my character, my ministry and my humanhood.”

Furthermore, he addresses allegations that he has been an absent father regarding his relationship with his daughters. Apparently, there was some photo shoot with his daughters that he was not able to participate in, which was addressed on the show. But Pastor Bryant explains that he was coming from South Africa to be a part of the photo shoot but got delayed in Germany. He says the producers and network knew this but these details were left on the proverbial cutting room floor I guess. And he also reveals that the reunion was recorded in 2019, and that his daughters were upset with him as well because for the first time in their lives, he was not present to take them nor pick them up from school. Also, there was an adjustment period for the whole family as he had recently moved to Atlanta. But he concludes that his teenager daughters are “absolutely daddy’s girls.” I’m not a parent, but when I reflect on my relationship with my parents as a teenager, there were times when they got on my nerves. All of this is relatable, wouldn’t you say?

Additionally, and centrally, he addressed Monique’s cheating allegations and calling him a “holy whore” I guess for a previous relationship he has had since his divorce from Gizelle. “I’ve been divorced for 11 years and single people date. When you date, sometimes it works, and sometimes it didn’t. In this instance, it didn’t. Nothing immoral, illegal or unethical took place. It did not work out. There is some clarity that needs to happen. I’m not married, I’m not engaged, so some of you have a strange relationship with language. You can’t have a mistress while you’re single. I’ve never had any mistress. She has never been to visit me in Atlanta, she has never been to New Birth, never been to my home, I’ve never been in her home.” He also revealed that he is still working out the kinks in his relationship with his former father-in-law, who is his Kappa Alpha Psi brother, as his marriage with Gizelle ended in part due to his previous infidelity. And he has owned up to his infidelity in his previous marriage.

And then the clincher of the clap back is Pastor’s Bryant’s critique of Monique’s husband Chris Samuels, who he says has CTE!

“You live in a house with a man who has anger issues, who doesn’t mind expressing volatile behavior. Everything that I’m saying tonight is not conjecture. This is not murder, this is self-defense. On Sunday, for the first time in five years, I’m inviting my audience to watch the reunion of the ‘Housewives of Potomac’, you’ll see Monique’s husband try to attack my ex-wife. Security had to be called, he had to secured. I’m very concerned.”

See the clap back for yourself below!

Call his clap back righteous, revealing or ratchet, but don’t call me tonight because I’m watching RHOP for the first time on tonight at 9 p.m. on Bravo! LOL.