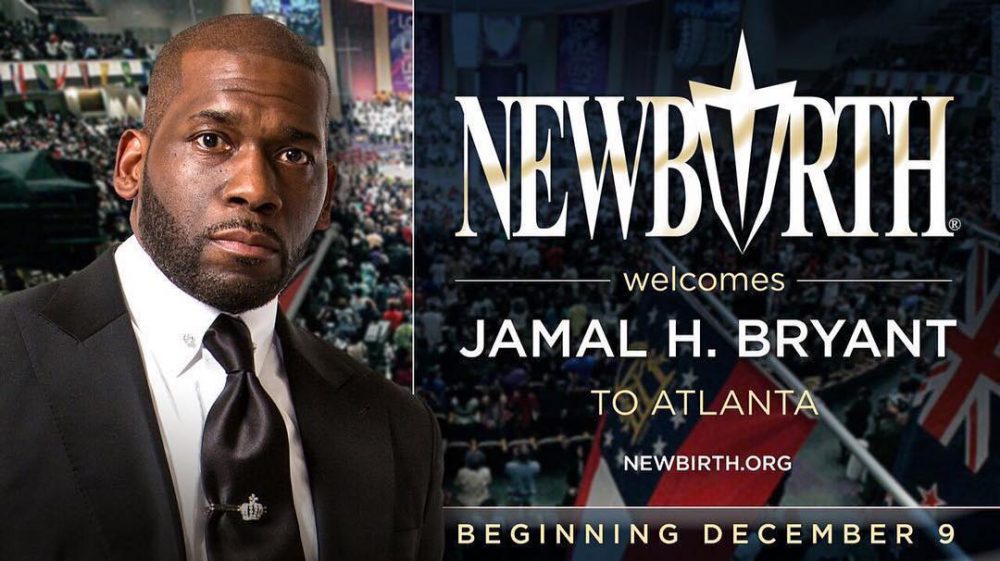 Now that Season 3 of OWN’s “Greenleaf” is over until next season, I’m back to finding my religious drama and intrigue in real life! LOL.

Last week, Atlanta was abuzz with the news that Dr. Jamal Bryant, founding pastor of Empowerment Temple, an A.M.E.  megachurch of about 10,000 members in Baltimore, Maryland was leaving his church to be the new pastor of New Birth Missionary Baptist Church, which also has about 10,000 members, in Lithonia, a suburb of Atlanta, Georgia. He will preach is first sermon at New Birth on Sunday, Dec. 9.

The announcement has people talking for many reasons. One of those reasons is that Bryant’s tenure comes after the death of the controversial church founder Bishop Eddie L. Long, who passed away in January 2017 after battling cancer. Prior to his death, he wrote about his life in his memoir “The Untold Story – The Story of Adversity, Pain, and Resilience.”  In a previous blog post about this memoir, I wrote, “Is Bishop Long going to address what really happened with those young men who accused him of sexual misconduct as their claims were settled out of court and why he settled? That’s all people want to know at this point!” What is ironic about that post, which I wrote in 2016, is that the post was about Bishop Long AND Pastor Jamal Bryant. Here is a link to the post “Bishop Eddie Long Releases New Book ‘The Untold Story’ While Pastor Jamal Bryant Sidesteps Paternity Claim Today… What Are The Biblical Requirements for a Pastor?” I had no idea that two years later that these two men who be forever linked by last week’s announcement.

And that blog post brings me to another reason why people are talking about Bryant being named pastor of New Birth Missionary Baptist Church. Even without all of the Bishop Long controversy, Pastor Bryant has enough controversy that he can claim on his own – from a fairly recent out-of-wedlock paternity allegation to the admission of infidelity in his previous marriage to Gizelle Bryant, one of the stars of “The Real Housewives of Potomac.” He was dating R&B singer Tweet but I guess they have broken up because I haven’t heard anything about them still being together. He referred to her as his “Last Lady” in the clip.

Below are a few comments I saw on New Birth’s Facebook page following the announcement last week:

“WoW I’m shocked they gave it to Jamal with all the scandals he been through…but no man is perfect and I wish him the best.”

“Facts: No pastor wants the debt associated with NB! It will take a name to fill the seats & ‘encourage’ people to give! We are all flawed & human! However, for the church’s sake, i pray there’s real accountability worked into his contract! Literally, he just left court on stalking charges! There’s a pattern of poor judgment! I’m just gonna pray!”

“Plenty of women to choose from.”

“Wow, I can’t believe these are Christians on the church website with this garbage. Talking about men of God like we are talking about Love and Hip Hop! Messy!!! Truly I wish that Pastor Bryant would not even go down there in this mess. Because he is loved and wanted at Empowerment Temple and ALL over the country. Half of the people on here don’t support the church financially or spirituality. The way our world is today we better, get our lives together. We don’t know when the Lord’s going to call us home. Please stop being so quick to point out what we think is somebody else faults and get our own selves in order. NB congregation on your new appointed Pastor. Pastor Jamal, love you! I will be praying for you and supporting you the same as I did at ET. I believe in you and the God we serve.”

“So he switching denominations!?”

See ALL of the 538 comments and counting HERE.

All of this chatter has got me thinking about being a pastor as a single divorced man. If real life is stranger than fiction (like what went down on OWN’s “Greenleaf” following the divorce of Bishop & Lady Mae), what should be expected from the pastorate of single divorced man? And should single divorced men be allowed to be pastors at all? Years ago, Atlanta-based but known worldwide pastor Dr. Charles Stanley, who is one of my favorite pastors, caused a lot of controversy when he decided to remain pastor of his church, First Baptist Church of Atlanta, following his divorce. His stance was particularly controversial when he previously said he would step down if he ever divorced.

Do you think divorced single men should be pastors? Below are three views on this topic:

If you are unfamiliar with Dr. Bryant altogether, here is a brief bio from the AJC. Boston-born Bryant, a third generation pastor, is a graduate of Morehouse College, Duke University and Graduate Theological Foundation. As he failed the 11th grade and received a GED, he started at Morehouse College, which is in Atlanta, on probation. He is the father of 5 daughters. Also, his sister Dr. Thema Bryant-Davis is a relationship counselor for Pastor Chad Johnson and his fiancée Michelle Williams, formerly of Destiny’s Child, on their OWN reality show “Chad Loves Michelle.” (I am really enjoying this show by the way.)

I listened to Dr. Jamal Bryant being interviewed on a local radio station V-103 last week, and he is very personable and upfront about the fact that he has not been a perfect shepherd. And I especially loved how he closed out the interview with this prayer “Lord, Your Will. Nothing More, Nothing Less & Nothing Else.” The first time I heard that prayer was from Bishop Greenleaf, my favorite fictional pastor! LOL. I don’t mean to be cavalier here because we’re talking about real lives and the saving of souls, but art is inspired by real life…

10 thoughts on “Should Divorced Men Such as Dr. Jamal Bryant, Newly Named New Birth Missionary Baptist Church Pastor, Be Allowed in the Pulpit?”